Giorgio Armani played against type with a lineup of orange-colored designs. 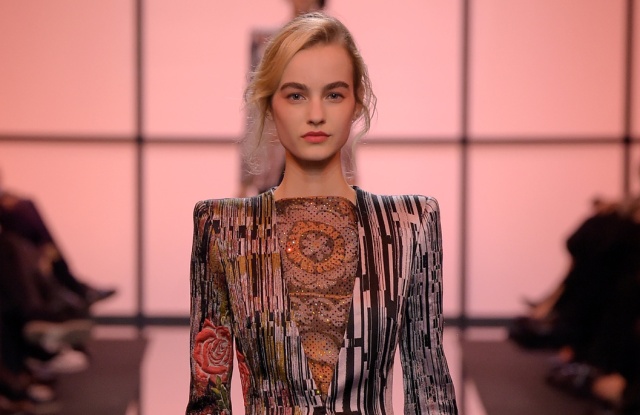 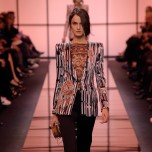 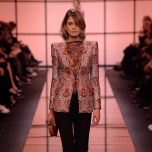 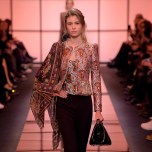 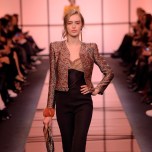 Orange is the new black. So says Giorgio Armani, the master of understatement, who chose this most unexpected of colors as the running theme of his Armani Privé haute couture display.

It wasn’t the first time Armani has been wowed by a powerful hue — spring 2016 was an ode to mauve. But it takes a brave man to toy with a shade associated with prison uniforms, safety jackets and — eek! — Halloween, especially with two freshly minted Oscar nominees, Nicole Kidman and Isabelle Huppert, sitting in the front row.

The designer’s controlled introduction was a testament to his confidence and skill. Rather than sounding an orange alert from the get-go, he injected just a soupçon of coral via floral embroideries on one of his signature peak-shouldered jackets and the embroidered lace top worn underneath.

Armani turned up the dial with a curry-colored silk satin jacket and another in orange crocodile leather. By the time he unleashed a series of printed silk dresses, it felt almost natural to be drinking in bright citrus shades instead of his trademark taupe and gray.

Why orange? “Because it’s an optimistic color. Because it’s a color that suits blondes and brunettes. Because it goes beyond my usual palette of signature Armani colors. This is the new generation Armani,” he said backstage.

The designer played with materials to modulate his chosen shade. He bathed a crystal-embroidered dress in a halo of sheer orange silk and scattered lace and sequins on a fluffy carrot-colored mini cape.

Armani broke up the sea of orange with evening gowns in black, including a one-shouldered column that twisted around the body in diagonal pleats. It was a strong red-carpet contender, as was an apricot lace dress with a sleeveless bodice embroidered with anthracite and orange crystals.

He admitted that the color might not suit everyone, adding that if Kidman and Huppert choose his label for their big Oscar night, he will tweak the designs accordingly. Not to mention the fact that orange doesn’t exactly play well against a red carpet. “That’s the problem,” Armani conceded. “But I can’t design an entire haute couture collection for the red carpet. I design haute couture for my clients.” These flamboyant designs could win him a whole new audience.