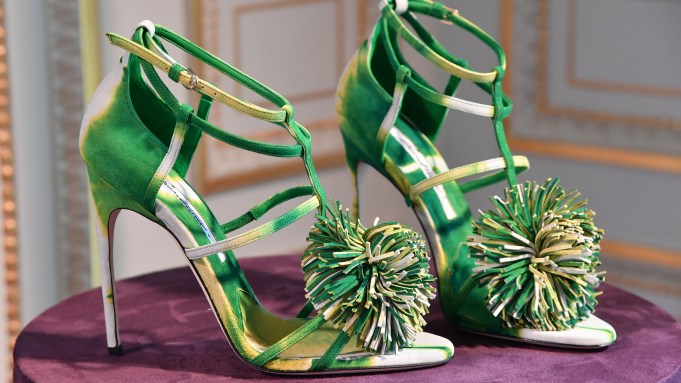 PARIS — A panoply of creations from across a jam-packed week of accessories presentations here captured a collective desire from designers — in these doomsday times — to channel optimism through their collections.

Myriad moods were at play; among the headlining trends were graphic colorblocking, bags at Delvaux and Byredo, sandals at Hermès and Pierre Hardy and vivid hues — with yellow as a surprise hit. Beckoning long summer days was a haute-craft, back-to-nature vibe with a focus on summery wovens like raffia from brands including Robert Clergerie and Aperlai. At the other extreme, an appetite for bejeweled creations included Olgana Paris’ glitzy updates on its signature Amazon sandal, and colored mules with detachable crystal ankle cuffs that double as bracelets. The label’s high profile followers include Bella Hadid and Rihanna.

Channeling good vibrations were the statement jewelry pieces at Eddie Borgo, Jennifer Fisher and Delfina Delettrez and, from the footwear crew, rainbow heels at Alexandre Birman, a vibrant graffiti story at Christian Louboutin, and pompom and tie-dye details at Brian Atwood, who staged a high-heel show by an all-male dance troop at the Hôtel de Crillon for his Paris debut.

“It’s all about thinking inside the box,” joked Roger Vivier creative director Bruno Frisoni of his giant box installation, made up of 10,500 individual shoeboxes. “What better than a beautiful box to show a collection?”

Novelties included a new angled heel shape called the ‘Choc,’ based on a model from the label’s archives, plus a new ‘V-Type’ upper (a pun on the Jaguar E-type), with a vivid palette ranging from emerald green to tangerine red. The house also introduced a new stretch ankle boot and a striped story riffing on gentleman’s shirting. As for the bags, a stripy update on the hero Viv’ Cabas came in a mix of raffia and leather while a new micro bag, designed with smokers in mind, was shaped like a cigarette packet. “They can wear it at night,” Frisoni said.

Eddie Borgo drew inspiration from Georgia O’Keeffe’s large-scale paintings and the artist’s personal style, meanwhile. “We looked at her flowers and how they feel so sculptural yet organic,” he explained. “We wanted to take some of that fluidity and incorporate it, so you’ll see a lot of manipulating the metal.” Bags also echoed O’Keeffe’s art, most memorably a beautiful floral pattern. The designer’s signature bandannas were expressed through twists and folds in bracelets and earrings that created the illusion of fabric.

For Delfina Delettrez, it was quality over quantity, with a collection focused on “a collectible [category]: earrings.”

“As you learn and feel more confident and skilled, instead of adding techniques, metals and elements, you start to take away. It’s more difficult to do a strong piece that you are happy with using fewer elements,” she explained. The line’s “twin” earring was based on two small interconnected hoops mixing three colors of stones — diamonds, emeralds and sapphires — with the designer’s signature buckle closure at the back. Her witty chain Virus earring, meanwhile, can be attached to other earrings and studs to dangle, or be “plugged” into the outer ear.

Chanel-owned headgear specialist Maison Michel’s lineup extended to scarves, presented in many creative ways, such as sewn under or looped into hats or transformed into visors. Indian jewelry was also a recurring theme, embellishing deconstructed hats which had been sliced and then sewn back together.

Feminine-meets-edgy was the vibe of the latest collection by Fabrizio Viti, the footwear designer behind Louis Vuitton’s women’s shoe collection. His unexpected fabric combinations — rubber bow embellishments on leather or satin uppers — shouldn’t work, but they do. He has also expanded his resort 2018 Diana Ross tribute collection with disco-ready metallic sandals in a Seventies palette and a leopard print.

Among the launches, Longchamp unveiled its first eyewear collection, produced under license by Marchon Eyewear. Key styles included a pair of folding shades inspired by the house’s signature Pliage bag. The house’s triple-tone suede wedge sandals summed up the “urban safari” mood of Sophie Delafontaine’s Spring 2018 collection. The Mademoiselle Longchamp bag stood out from the crowd with a graphic tribal motif in baby calfskin.

Byredo’s Ben Gorham used images of early Seventies American muscle cars taken by Craig McDean in the late Nineties as the basis for his capsule bag collection, dubbed Accelerated Culture and inspired by drag racing. The designer focused on two things: translating the striping technique of cars into leather making – which essentially means cutting and stitching- and getting the colors right, which he said took more than few trips to the tannery.

At Moynat, artistic director Ramesh Nair toyed with proportions on miniature versions of two of the brand’s key styles: Gabrielle and Réjane, along with mini versions of the Cabotin and Dance. Elsewhere, it was all about shape manipulation as seen on the Mini Vanity, which morphed into a Mini Pyramide before eschewing edges altogether as the Mini Sphere. Nair said in his notes that it was very much about “exploring new frontiers where proportions, shapes and colors become playful elements of a new creative geometry.”

New styles from Francesco Russo include a scalloped graphic sandal with clear plastic details so the straps appear suspended, as if floating on the foot. For boots, the designer incorporated the fish net mesh that has caught the collective imagination this season.

According to Browns Fashion’s women’s wear buying director Ida Petersson, Katrin Alda’s fledging Icelandic label Kalda makes the best mules in the business. Now Alda has further expanded her repertoire for spring to include slides, sneakers and boots — all with her signature diamante buckles.