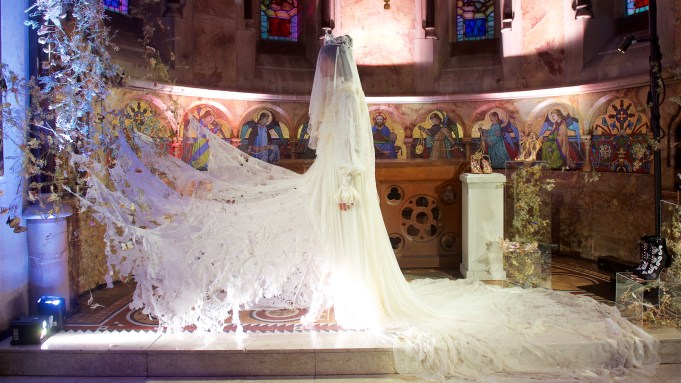 Inspired by Tim Burton’s films, Sophia Webster’s muse for the season was Lydia Deetz, a character from “Beetlejuice” played by Winona Ryder. Webster drew on Goth glamour for the setting of her fall presentation in London on Monday. She tapped Rebecca Law, who dressed and covered the chapel of St. Barnabas in Soho with generous amounts of dried flowers and hundreds of fabric butterflies, while Edward Meadham (formerly of the London label Meadham Kirchoff) designed bespoke Goth looks specifically for the models in the presentation. “I tried to re-create the scene where she disintegrates into butterflies in the corpse bride at the end,” Webster said. Among the designer’s favorites this season is the Ciara Butterfly shoe, reinterpreted for fall in decadent gold mirror leather with gold thread embroidery.

Aiming to reinforce her brand message, Emma Hill presented her latest collection for Hill & Friends with a color-drenched film, inspired by movies from the Forties, shown Sunday at the Curzon Cinema in Soho. “The Happy Factory” stars Hill alongside the fall lineup with an army of pink-clad bellboys on an assembly line, working in unison, checking for quality control at the brand’s factory. This season, Hill introduced small bags with styles named Tweency and Zippy. The Happy Zippy bag features a half-moon pocket with the brand’s winking eye lock, trapunto quilting and pale gold hardware in a mixed leopard print. For The Happy Tweency (her son’s code word for “little”), the wink lock was transformed into the face of a bat — the season’s new character. The bag features an adjustable leather threaded strap and can be worn cross-body or on the shoulder.

For her collaboration with Atelier Swarovski, New York-based Rosie Assoulin updated traditional Georgian settings and made them her own. The result was a lineup of elegant, understated necklaces and earrings, and bold statement rings encrusted with crystals in light denim blue and dark moss green. A member of the Swarovski Collective, the Brooklyn native won the CFDA Swarovski award for women’s wear last year.

Jean Paul Gaultier developed his own distinctive take on Swarovski crystals by creating a slash within the crystals. Working with the Swarovski team, Gaultier created a stone entirely from scratch and indenting it to create a unique mark. The result is what he calls a “perfectly imperfect” Kaputt crystal for his collaboration with Atelier Swarovski. This season he put those crystals in asymmetrical settings for necklaces, a large bracelet, earrings and a cocktail ring.

Founder Linda del Rio continued to develop her signature handmade Balearic sandals, a take on the traditional farmer’s shoe, which has an open toe and a slingback. She introduced lavish new textures, including a curly citrus Tibetan lambswool, and deliciously soft mink in gray and black. Five new styles of sandals in suede or embossed calf also appeared: A new lower-cut slingback that shows more toe cleavage, and slides including a basic model, one with cross-over straps, and a pair with a strap over the foot and a grip over the toe.

A chance encounter between a swatch of shiny black PVC and a fluffy scrap of pink goat hair provided the serendipitous starting point for Charlotte Simone‘s expanded outerwear offering for fall. Following the handful of fur chubbies launched this year, creative director Charlotte Beecham embraced a more grown-up aesthetic with a black PVC raincoat trimmed in baby blue or soft gray lambswool, and in a cute bomber style with a fluoro-pink lambswool collar. Accessories, however, are what Beecham does best. The Kaliedoscope wrap was a particular highlight, made from a rainbow patchwork of different lambswool colors, as were the long and shaggy scarves with contrasting pockets at each end for stashing bits and pieces.

Yunus Ascott and Eliza Higginbottom of Yunus and Eliza took elements from architecture, retro futurism, science fiction and the insect world, and incorporated multicolored sapphires into a sculpted ring. “The collection continues exploring and refining themes that have preoccupied us for a long time in our signature work,” said creative director Higginbottom. “The greens, blues and pinks evoke the iridescence of an insect’s wing.”

Inspired by abstract art,  Lulu Guinness created a light-hearted medley of graphic prints. Black and white stripes and geometric shapes in pinks, greens and blues came as a pattern on a vintage-looking cigarette case clutch. A leather tote, meanwhile, was folded like an accordion and had two prints, one on each side. This season, Guinness expanded her collection to include silk or wool scarves adorned with prints including lips, an Anna doll, Kooky Cat and the designer’s seasonal arty pattern.

Referencing the Forties and media notables such as Diana Vreeland and Alexandra Shulman, Aspinal of London introduced the Editor’s tote. The tech-enhanced tote has a phone charger and a tracking system that allows the wearer to trace the bag with a mobile device.

The Cambridge Satchel Co. hosted a party Friday night at its Covent Garden store to introduce a new and varied color palette to its latest collection. Peony peach, sweet pea blue and navy were paired with a neutral clay tone. Highlights included a small clutch with a scallop detail on the front flap and a gold twist lock fastener.