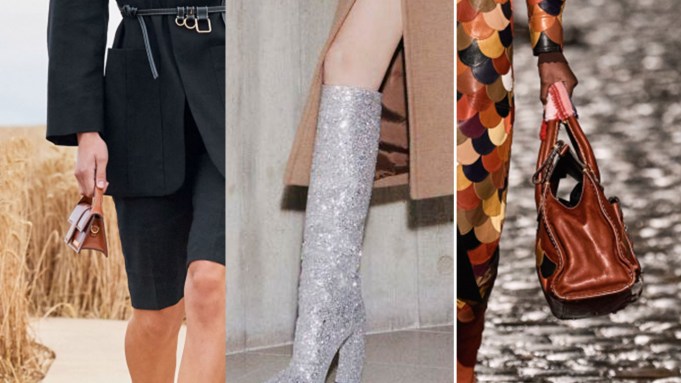 Even more than usual, buyers were expected to be aesthetic futurists when considering merchandise to stock for this fall. What will women want to wear when they finally break free from the burden of pandemic lockdowns? And what will their lifestyles upon that reemergence look like?

In the accessories categories, the largest question mark falls on shoes. Will women be so sick of lounge looks that the pendulum will sharply swing toward the impractical and opulent? Or has lockdown and the comfort of cocooning in one’s own home had an irreversible effect on the way consumers want to dress?

According to buyers, the answer remains unclear — but they were unified in that a much-hyped rush back to high heels seems unlikely.

“I think we are taking the learned from the past year-and-a-half and not letting go of that ease and comfort but still investing in power pieces to dress up and down with styling. I think a lot of people will remain working from home in a hybrid format but shopping will become a destination again and a celebratory moment,” said Marie Ivanoff-Smith, fashion director at Nordstrom.

She, like other buyers, have made deep investments in high fashion clogs as an intermediate style. The shape started making the rounds this past winter, with styles from The North Face and the direct-to-consumer streetwear brand Braindead becoming popular as a quick slip-on to leave the house for afternoon errands (paired with thick wool socks).

Ivanoff-Smith said: “I’m not sure there will be a rush back [to heels]. I think it might be a progression. I personally love comfort, but I’m tired of wearing the same slip-ons. Now I’m looking at the clogs I wore back in the day and thinking, ‘OK, a little platform and they’re still casual.’ There is also the utility boot and for heels it might start with polished boots for the holiday season.”

Brigitte Chartrand, vice president for women’s wear buying at Ssense, has also bought deeply into clogs, particularly those from Khaite, Gucci and one name that continually came up with buyers — the new Chloé under creative direction of Gabriela Hearst. Matchesfashion’s head of women’s wear buying Cassie Smart called the collection a “key highlight” of the season for accessories and that the company has bought deeply into the revived “Edith” bag.

But still on the shoe front, Chartrand said lug soles continue to perform well on the site and new fabrications in rubber — such as Bottega Veneta’s “It” Puddle boots — have become popular for their softer price points and impactful shapes.

“They have a very noticeable look and also a great price point. I think it checks all of the boxes of practicality that people are looking for but also has a great style,” she said.

On the fall runways, brands like Versace and the newly relaunched Blumarine made strong cases for the stiletto’s return. According to Smart, shoppers are most interested in heels with “emotive and iconic styles.” Designer Amina Muaddi, who collaborated with Rihanna on styles for Fenty, was cited as a stand-out seller throughout the pandemic by Ssense, Farfetch and Matchesfashion, the latter of which said her shoes often sold out. Ssense has also invested for fall in a new brand, Ancuta Sarca, designed by a recent Central St. Martins graduate.

However, there remains a bit of hesitancy in claiming a full return to stilettos. “I do think we’ve seen, like at Ferragamo, more of a kitten heel — that’s a nice transition. There was more of a square heel at Victoria Beckham with beautiful boots. They are stable to walk in but are an instant outfit-maker, and to me, that’s what I would wear,” Ivanoff-Smith said.

Miu Miu’s wide assortment of boots was also cited as standouts by buyers.

“For fall 2021, we saw designers taking a high-low approach to footwear — Valentino, for example, had great, strong attitude boots alongside their spike pump heel. We predict our customers will be taking the same approach to their own wardrobe,” said Smart, who also said sneakers continue to be an important seller for the company.

Some stores are preparing to outfit women for a new normal once lockdowns lift — a hybridized work-from-home schedule that will require duality within one’s own wardrobe.

Stand Up Comedy, a boutique in Portland, Ore., that specializes in up-and-coming, forward-thinking designers, is “definitely continuing the work-from-home look with a more casual, more indoors kind of vibe. We’ve seen beautiful new house slipper options across the board — things that travel between indoors and outdoors,” said owner Diana Kim.

She’s bought into new styles from Hereu as well as a new concept by Bless, which makes wool slippers that appear to be facsimiles of famous shoe styles like the Nike Dunk. At $617, they represent the higher end of the slipper spectrum, but Kim called the designs, which are being marketed under the collection name, Homies, as “conceptual objects as well.”

While shoes continue to evolve and remain front-of-mind, the handbag market by contrast has been “softer for sure,” Chartrand said. Prior to the pandemic, fashion accessories were seeing something of a “shoe moment,” and it appears this will extend into the reopening as well, particularly as many women have spent the last year without using a bag at all.

“We have been seeing some great sellers across totes, crossbodies and slings, and I think smaller bags are going to continue to do well. The Chloé tote flew out right away, so we are investing quite a bit in that style and then the Bottega cassette bag with the chain and the Jodi in the mini size do really well. There were beaded and crochet bags as well that we were drawn to for fall. Women seem to just need a smaller bag — as long as it fits our credit card and our phone,” she added.

Carney concurred that the bag market has been challenging as of late. “I feel like with bags it was just weird over the last couple of seasons, but I think now people want a little bag. They want the little Jacquemus bag that’s kind of impractical. Those continued to sell well.”

Farfetch senior women’s fashion editor Celenie Laura Fleur Seidel feels that “moving forward, there will likely be excitement around the opportunity to use a proper handbag again. It will signify the ability to go places, to dress up, to have fun with accessorizing once more. Simone Rocha’s ultra-feminine styles are playful for day and perfectly dressed up for night.”

After more than a year in isolation, surrounded by belongings — particularly a glut of clothing and accessories — with little use, buyers say that consumers will have a renewed interest in quality and artisanal fabrications. This manifested in special textiles, including brocades and shearling, and a better overall quality of goods. This also corresponds to an increased price sensitivity from consumers.

“We saw designers experiment with tactile fabrics bringing a feeling of comfort and luxury to bags through the use of shearling, felt and cashmere,” Smart said.

Kim concurred, noting: “I have seen that our client has a hard line and says, ‘If I’m going to spend $600 on a bag, there is zero reason why it shouldn’t be beautifully made.’ This is reflected in a lot of our jewelry section now, too, because there is a lot more interest in fine than in the past.”

Ivanoff-Smith said that later this year, “crafts is something to be focused on. All those special moments and special details bring life to a garment and create a connection. Even in the contemporary market we are seeing a celebration of craft culture, with so many beautiful hand-knit sweaters. It’s something I’m excited about because of its sense of emotion.”

And in the booming jewelry category, there seems to be a gradual shift away from statement earrings and toward necklaces. “I think with the mask thing, it kind of shifted because putting a mask on and off with statement earrings is kind of difficult,” Carney said. “We saw that people like to have a piece of statement jewelry on Zoom and I think they did end up going toward a statement necklace. It was a trend that was already happening, but I think the pandemic helped it along a bit.”