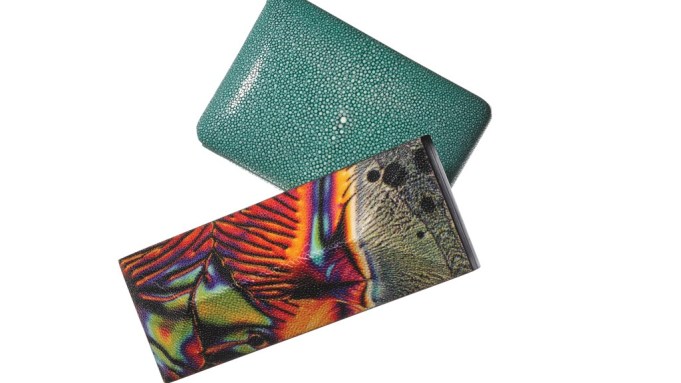 Luxury isn’t necessarily all in the label, and independent makers of exotic-skin handbags are out to drive home the point.

Among a crop of independent labels carried at boutiques from Kirna Zabête and Fivestory to department stores Bergdorf Goodman and Barneys New York, they often sit alongside category mainstays like Nancy Gonzalez and Carlos Falchi. They also compete with styles from big fashion houses like Givenchy, Valentino, Céline and Proenza Schouler.

The upside of using exotics for designers: the ability to obtain raw snakeskins directly from the source, the relatively inexpensive process of color-treating skins and mixing materials to deliver a unique product.
The lure for retailers: a high-end product with a marked point of differentiation from an often crowded handbag market.

“There is still some uncertainty in the economy — retailers aren’t out of the woods yet — but certainly the luxury consumer still is very resilient and still out spending,” said Alison Jatlow Levy, a retail strategist at consulting firm Kurt Salmon.

A key reason she believes accessories continue to gain popularity, drive growth and generate consumer interest is that women are willing to invest in the category. They might not be as willing to with ready-to-wear. Expanding upon this notion — and as it relates to the surge of product and demand for exotic skins in the marketplace — Levy said there are two angles.

The first is a need to differentiate the assortment, and retailers must find ways to keep things fresh for the consumer. This shopper is looking for an investment piece and to update her wardrobe, and she’s looking for timeless style, not season-to-season driven, as is often the case with apparel.

“While these luxury labels have been out there for a while and continue to put forth new styles, to some extent, this woman has seen or already made that purchase. They are looking for the retailer to provide something new and different, and this is where the independents come in,” Levy explained. She noted that exotics always capture the consumer’s attention — and new players in the field are energizing the market right now.

The second is a shift from branded to emerging designer talent. Instead of consumers relying solely on the big design houses to direct their purchases, the shopper today enjoys discovering her own fashion — which Levy notes has been largely fueled by social media, blogs and all things digital.

“It’s the idea of finding something new, being a little more edgy or downtown — not having the bag from the big Madison Avenue store. It’s cooler to have something that not everyone else has.”

She said a similar adjustment in consumer attitude is happening in footwear: The mind-set is shifting from coveting branded designers to emerging talent. She cited Nicholas Kirkwood, Charlotte Olympia, Alexandre Birman and Sophia Webster as leading this charge.

“The word ‘exotic’ is a mental reference point that something is based in luxury, in the sense that it’s like using gold. It’s a standard of luxury. It’s rare, and it’s expensive,” Claire Distenfeld, owner of one-year-old Fivestory. “And although it’s not a new phenomenon, people gravitate toward luxury brands — like a Céline bag. But at the end of the day, if you don’t want to be marked by a brand, you can be marked by the quality of the materials. Using exotic skins is a way to stamp yourself as a luxury handbag without being labeled.”

In fact, she contends that her Upper East Side shop’s private collection of python bags — which this spring has expanded to include varying sized alligator clutches — is the single best-selling item in the store. The python Ivanka pouch retails for $595 and structured alligator clutches retail from $3,800 to $5,200.

But the real draw is for the retailers. These brands let stores customize product in ways that the big fashion houses typically cannot, according to Distenfeld. Independent exotics can reflect the unique identity of the boutiques by working with the retailers to produce one-offs and special editions for them.

“Exotics are always offered in multiple colors. When we work with [manufacturers], it’s not like the only color is black and I have to digest that. They say, ‘Pick a skin’ and, ‘What color do you want?’” she said.

This is attractive for Distenfeld, who said she ordinarily would be concerned that a major store like Bergdorf’s also picked up Hunting Season — but she is confident that her selection will always be different, no matter what another retailer selects.

For her, there is a particular customer who does not want a designer bag. That consumer appreciates quality and will splurge — and doesn’t need a label to justify this. For example, of an oversized emerald green Hunting Season bag — priced at just less than $3,000 — Distenfeld said: “The right woman came in, and she bought it and understood it. She didn’t need a label or need it to be branded.”

“People don’t feel the price resistance because they feel they can carry it in and out [of seasons]. It looks like fashion without being branded,” Easley said. “There is a perceived value in the skins, and python is not as expensive as some other skins. It’s timeless.”

She added that she and co-owner Beth Buccini have seen an influx in the number of designers producing high-quality exotic bags — with solicitations mounting each season.

The partners said their consumer is opting more frequently for independent exotic handbags from Tonya Hawkes or Sang A as an alternative luxury choice — but she’ll still buy a python Céline clutch or a leather Lanvin bag embossed with an exotic print.

Both Kirna Zabête and Fivestory carry Tonya Hawkes’ structured python minaudières adorned with oversize Lucite stones. The designer, based in Italy, launched her line in spring 2012 and is already carried in 18 doors worldwide, including Harvey Nichols in the U.K. and Bloomingdale’s in Dubai, Beryozka in Moscow and Les Suites in Paris.

“Fifties jewelry is an obsession for me, and with the inspiration it brings me, I work out pieces that [exude] the essence of vintage but still feel modern,” Hawkes said of the Sputnik-inspired ball closures and Lucite studs on the perimeter of her bags that have become a signature of her line. The bags are also a nod to the opulence of the Twenties

Many of her $1,000 to $1,300 bags are made of snakeskin with printed feathers, pinstripes, herringbone, polka dots or graphic patterns.

Hunting Season designer Danielle Corona founded her company in 2006 after spending time in Italy, where she interned and worked at Valentino and VBH under Bruce Hoeksema. She moved to New York to start her line of bags, belts and small leather goods that generally retails from $350 to $2,500, with larger pieces up to $3,000. Corona mainly has produced custom pieces for private clients over the past seven years, and is just now entering the wholesale market.

Corona has since relocated to Colombia — where she sources and hand-cuts the horn, the latest material incorporated into her pieces.

Corona has also introduced crocodile, and she describes the selection of soft, fold-over clutches and cylinder bags as versatile enough to go from day to evening. Besides black and white, the $625 to $795 styles come in a color palette dominated by jewel-tones — sapphire, emerald and ruby.

“There’s a major emphasis on exotics — more so than I’ve ever seen before,” said Deborah Soss, Bergdorf’s vice president and divisional merchandise manager of handbags and accessories. “When six to eight years ago it was all about alligator, crocodile and precious skins, within the last three years, it’s been exploding. Obviously, with crocodile and alligator, it’s difficult to find good quality and the price points are exorbitant, so people have gone to python, whip snake and viper to get that exotic look, which really elevates the bag.”

According to Soss, the integration of exotic skins has touched every brand, from Chloé and Proenza Schouler to the crop of new designers now carried on the retailer’s contemporary 5F floor — which was minimal just a few seasons ago.

Bergdorf’s April Hennig, vice president and divisional merchandise manager of 5F women’s ready-to-wear, handbags and accessories, distinguishes between the true designer exotic handbag business — dominated by players like Nancy Gonzalez — and offerings on 5F, noting designs from Gonzalez are more serious and targeted for a mature audience, and other resources in the designer world using such skins — like Givenchy or Céline — have price tags that climb well above $3,000.

“Aspirational fashion consumers want something a little more fun and interesting — and less serious and sophisticated,” Hennig said. “You can get a lot of fashion look without it getting too serious. Khirma Eliazov has been very respectful to capitalize on that niche.” Eliazov’s mixed-media leather, lizard and water-snake clutches range from $575 to $695.

Eliazov was picked up by Bergdorf’s last fall, and the four-year-old company’s prices run from $110 for a python bracelet to $2,295 for a leather, suede and crocodile structured tote. The designer also opened her first flagship on Charles Street in Manhattan’s West Village late last year.

Eliazov attributes her wide price range to her mixed-media approach, where the Herzog clutch can retail for $695 for a suede, python and stingray version or $1,495 for one in crocodile, python and stingray. For fall, Eliazov has introduced a $1,295 minaudière fashioned from stingray and python that comes in copper, burgundy, cobalt and a rich emerald. The season will also see the debut of her version of a classic envelope clutch — ranging from $695 to $895, depending on the amount of python used.