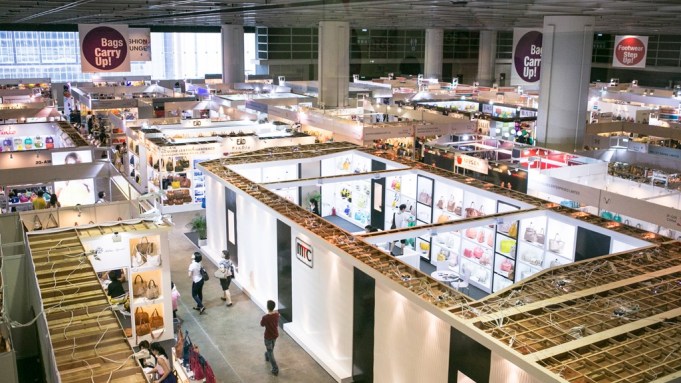 Asian exhibitors at the Fashion Access fair, which took place at the Hong Kong Convention and Exhibition Centre Wednesday to Friday, showed an increasing interest in offering branded goods. Anecdotally, it appeared that every other manufacturer was touting not only its goods but also its own brand name.

Indeed, fair organizers have recognized the trend and pointed out the increasing number of Asian designers and manufacturers in the Fashion Avenue section of the fair, which showcases branded goods. A few local Asian jewelry and bag designers also had their own special section next to Fashion Avenue.

Overall, organizers said the fair featured 298 exhibitors from 20 countries. There was a large influx of Indonesian and Philippine manufacturers and designers thanks to the efforts of a few trade organizations. Attendance figures were not available at press time.

Arnold Omaque, owner of Omaque Arts & Crafts, a Philippines-based producer of costume jewelry and accessories, has been moving to higher value items in response to the appreciating Philippine peso. While the appreciating currency has helped make imports of raw materials, such as various stones, more affordable, it’s also translated into higher export costs. Moreover, labor costs are increasing, he said.

Given the appreciating peso and small order sizes, “we don’t do low-end pieces anymore,” Omaque said. Most clients are boutiques with order sizes of about 30 pieces. Instead, the company focuses on differentiating from the competition through design, service and quality, he said.

Omaque exports about 50 percent of its goods to Europe, including Russia. Omaque said Europe remains the company’s main export destination but noted that emerging markets such as Russia and Latin America are seeing much faster growth. Without Russia, European sales now make up about 20 percent of total sales, down from 40 percent several years ago.

Similarly, Supersharp Industrial Ltd., a Hong Kong-based footwear maker with factories in Guangzhou and Anhui, has been moving upmarket in the last few years by working with more expensive materials and focusing on design and hand craftsmanship.

The company, which originally started as a slipper manufacturer 30 years ago, has been moving away from low-cost items and into higher margin items, said Elaine Lee, director at Supersharp.

Like other manufacturers in China, Supersharp has seen an escalation of labor prices. The company’s first factory was located in Mission Hills, Guangzhou, which is now home to one of the world’s largest golf clubs. The company moved its factory to Dongguan and, since then, has seen many neighboring factories shut down. It’s much harder these days to find and keep factory employees, Lee said.

“People don’t want to work away from their home [in a different province]. I think it’s the result of the one child policy,” said Lee, noting that office jobs are much more in demand.

Lee was at the fair showing off matching mother-daughter shoes under the brand name Ella Ella, a U.S. label developed a year ago by one of their longtime clients. The company is now working on distributing the shoes in Asia, Lee said.

Manufacturers are also seeking to differentiate by offering more exclusive items. Bellasima, an Indonesian manufacturer of leather and exotic skin products, started as a seller of batik fabrics. A.M. Rahayu, marketing director at Bellasima, said interest in fabric was limited to Japan and a couple other places. The company then moved on to leather goods but found a niche in exotic skin products about three years ago. The company opened its own tannery two years ago and now processes various exotic skins including python, fish and goat and manufacturers bags, shoes and other items under its own brand name, Bellasima, or for other brands.

The company still sells traditional leather products, Rahayu said, but competition in the market is very fierce, she said. Exotic skins, such as python, sell at higher price points and competition is limited because the market is regulated and limited by the Indonesian government, she added.

Fair organizers have noted the trend and opened a “Sourcing Luxury” exhibit with 14 companies showcasing luxury products such as ostrich and alligator leather, rare furs, and handcrafted metal, mother-of-pearl and wood components. The organizers said the exhibit will occupy a larger space at the upcoming fair in March.

Despite concerns about slowing demand in China, there continues to be “unwavering demand for luxury goods, especially from China,” said Perrine Ardouin, event director at UBM.

In addition to moving upmarket, accessories makers are eyeing the Asian market for growth. That seemed to be particularly the case for European or North American-based brands. Eli Lopez, Asia sales manager for Xti, a Spanish shoe company, said Asian sales now make up 20 percent of the company’s total revenues, up from nothing a year before. Xti is particularly focused on Southeast Asia, which Lopez said is far less crowded than China.

“Everyone is in China. It’s very competitive,” Lopez said. The company does distribute its shoes in Hong Kong, Taiwan, Korea and China but is eyeing fast growth in countries such as the Philippines, Indonesia and Thailand.

The company is building its own stand-alone shops in Shanghai, Taipei and Manila and has shops-in-shop in various cities.