Forget the ballet flat. Retailers claim that the hot trend in flat footwear for fall is the smoking slipper. 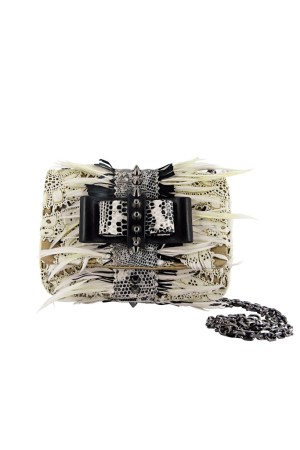 These aren’t your grandpa’s slippers — or your mother’s handbag.

This story first appeared in the September 26, 2011 issue of WWD. Subscribe Today.

Forget the ballet flat. Retailers claim that the hot trend in flat footwear for fall, from contemporary to designer, is the smoking slipper. As for handbags, the bestsellers by far belong to Celine, which has sold out at many stores.

Both these styles and many others are fueling the ongoing boom in accessories sales, which continue to outpace those of apparel.

Retailers are seeing strength across all accessories categories, with little or no price resistance from consumers despite economic uncertainty and higher prices from soaring commodity prices and mounting labor costs. Consumers are confident in the category, which might have something to do with the fact that there isn’t really a strong apparel trend at the moment, according to Paul Lejuez, managing director and senior analyst for retail specialty stores at Nomura Securities International. Because of this, stores are dedicating more floor space to accessories.

“Accessories across the board have certainly had good results and have taken share from apparel categories,” Lejuez said.

At Saks Fifth Avenue, Lincoln Moore, vice president and merchandising manager for handbags and accessories and fashion director for accessories, said that a customer will buy a pair of shoes or a handbag she truly desires — no matter the price.

“There is no price resistance as it relates to beautiful quality and value and originality. If it’s desirable and truly luxurious, she’s buying it regardless of the price. We aren’t thinking about price, we’re thinking about the inherent value and the uniqueness of it,” said Moore.

One of the fastest selling boots in the store’s designer footwear department are Nicholas Kirkwood’s suede platform wedge booties in burgundy (also one of the hottest hues spanning all accessory categories), which retail for $1,540. Then there are Celine’s Phantom and Luggage totes, which start at $2,000 and $1,600, respectively and are “flying off the shelves,” said Moore.

“[Celine] is very narrowly distributed and it’s the look of the time. Phoebe Philo does it best. It’s that restrained, timeless but edgy fashion that the customer is looking for right now. It’s something that’s going to last,” Moore said of the bag’s appeal to shoppers, calling the handbag the “number-one overarching product” in the entire store’s accessories offering.

Barneys New York completely sold out of Celine’s Luggage totes in cobalt blue, yellow and lipstick, according to fashion director Amanda Brooks. Other handbags that continue to be popular at the store are Proenza Schouler’s PS1 (it starts at $1,595 for the medium-sized style) — especially in colors such as military green, violet and teal — and, at a contemporary price point, Alexander Wang’s $700 Marion Mini Sling Bag in printed ostrich leather.

At Shopbop, fashion director Kate Ciepluch has seen shoppers gravitating towards structured bags from Alexander Wang or 3.1 Phillip Lim, as well as ladylike satchels across all price points from Rebecca Minkoff to vintage Chanel styles from What Comes Around Goes Around.

But at Net-a-Porter, Holli Rogers, the company’s buying director, cites a surge in what she’s coined alternative evening bags or “not your normal clutch.” Crediting Alexander McQueen with starting the trend with really bejeweled pieces, she believes that evening dressing has become somewhat more casual. Brands from Valentino to Christian Louboutin are delivering different takes on evening bags done in python or adorned with studs, and consumers are biting.

As for footwear, Rogers said that while men’s footwear has been a huge influence in women’s shoe choices — including brogues and monk shoes and loafers — there’s a prevalence of smoking slippers this fall.

At just under $1,000, Louboutin’s Rollergirl plaid version with a silver steel cap toe and chain detailing sold out on the e-tailer’s Web site, as did a similar style by Jimmy Choo. There’s also a leopard calf hair style from Louboutin that retails for $1,295 that’s been popular with consumers.

Sam Edelman’s $150 satin Adina slipper — available in black and silver and completely covered in studs and crystals — has been one of Bloomingdale’s bestselling shoes this season in its contemporary department, according to fashion director Brooke Jaffe.

Additionally, the retailer has done well with a similar version from Dolce Vita, which comes in black and leopard and retails for $159.

Jaffe also said that shoes from Rachel Zoe’s new collection are “blowing out,” and the store is already doing re-orders. Although it’s clear to Jaffe that “everyone wants to emulate her [Zoe’s] look from head to toe,” the store was unsure about how consumers were going to react to the sky-high platforms and vertiginous wedges the stylist-turned-designer delivered for her debut footwear collection.

“Her look is very aggressive and very high, and you never know if people are going to be able to embrace it,” Jaffe said. “The shoes are very high. One is a massive wedge, another is a platform bootie, and there’s also a platform pump. They are really big, but the demand is high. It’s been huge for us.”

At the same time, Jaffe has seen a return to old faithful classic brands such as Chanel and Salvatore Ferragamo — with complete symmetry in trending for both shoes and handbags.

“Ferragamo has had one of the biggest renaissances. Its appeal has become broad and a younger audience is seeing [Ferragamo] for the first time, and the more faithful, loyal customer is so happy to see a rejuvenated spirit in the brand,” she said, citing the $1,190 black leather Addison bag with a buckle flap, $575 peep-toe platform pumps from the runway in a houndstooth print with corresponding sole and $690 riding boots.