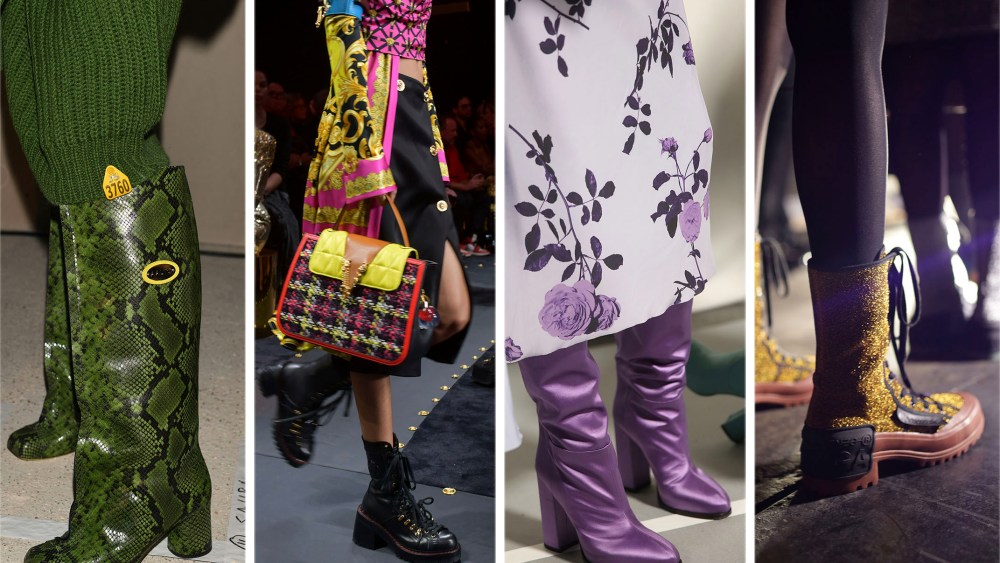 “Boots marched down the runway of every city this season,” said Roopal Patel, senior vice president and fashion director of Saks Fifth Avenue.

Combat, knee-high, metallic, animal prints and all-weather varieties finished off many of the best collections for fall 2019.

“There were very few heels on the runway, the idea of the sneaker was gone,” Patel added. “By the time we got to London and Milan, it just felt like such a boot season.”

“The chunky black Chelsea boots at The Row were a true favorite and an early indication of the footwear trends we’d see on the fall runways after New York,” added Elizabeth von der Goltz, global buying director of Net-a-porter.

Boots are a perennial buy for retailers, but it’s not always an obvious sell.

“It was hard for me in seasons past. Yes, we always bought boots, but you didn’t know what they were going with because people were buying leggings and lots of skinny pants,” explained Jeffrey Kalinsky, vice president and designer fashion director at Nordstrom. “But the clothes this season are going to call for a boot more than in seasons past.”

Indeed, longer skirt lengths — and the cool culottes Hedi Slimane paraded at Celine — call for to-the-knee boots to finish off outfits, according to Kalinsky.

Von der Goltz anticipates her customers “gravitating toward the fall runways’ slouchy boots in suede and leather,” listing Gianvito Rossi, Saint Laurent and Aquazzura as her go-to brands for those styles.

Animal prints were also roaring through the shoe category. “Python and zebra are the new leopard, and the perfect way to add pop of pattern to any outfit. Chelsea and hiking boots are our new wardrobe workhorses and embody fashion meets function — a major plus,” von der Goltz added.

Gianvito Rossi introduced an over-the-knee style boot with 85-mm. heels. “I think that an over-the-knee, 85-millimeter heel gives a cooler attitude to the boot,” the designer said, adding that buyers really gravitated to the new style.

At Roger Vivier, designer Gherardo Felloni designed his boot assortment “to fit the multiple personalities of women. Each woman is different and their needs are different,” he said. Felloni also fleshed out his Très Vivier collection, inspired by the house’s iconic model from Sixties, adding different styles of booties and knee-high boots to the assortment.

“It’s not just a boot season, or wide array of different boots,” Patel cautioned, “but what I think is also so interesting is the color palette and the shift to new beautiful neutrals in luxurious camels, bordeauxs, cognacs and bright reds.”

“Really, some of the looks this season just don’t look complete without some type of boot,” she quipped. “It’s a major boot season, with a boot for every occasion.”