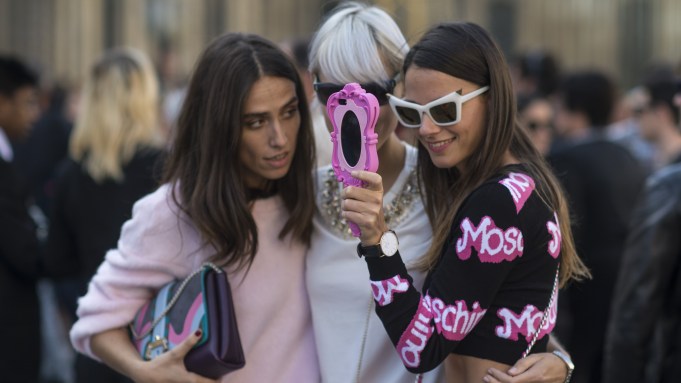 “Purchasing a new iPhone is generally a larger-sized purchase for most people but secures their sense of social identity,” said Vivaldi consultant Jenifer Ekstein. “Since most people want to be a part of the group but not necessarily blend into the crowd, the proliferation of different types of phone cases has made being a part of the group and standing out at the same time something that is achievable.”

As the tech world anticipates the new phones, iPhone case designers are finding inspiration on the runway.

“Our phones have become an accessory just like a handbag,” said Ekstein, adding, “Unlike purchasing a new handbag that could be a large investment, the ease with which consumers can switch their phone case makes expressing who they are extremely simple and cost-effective.”

The iPhone case has become much a personal statement as a necessity since the not-to-secret truth of almost every iPhone user is that for all its design and functionality, it’s safest in a case; most are unwilling to risk a crack in that slippery $649 (minimum) must-have.

ABI Research forecasts that global revenues of mobile accessories, which include cases as well as other items, will top $110 billion in 2021. In addition to protection, some offer added functionality — think screen protectors, privacy protection, antiglare, antifingerprint, antiscratch, wireless charging and more.

ABI senior analyst Marina Lu said that demand for customization of protective cases is growing, especially among the younger set. Seventy percent of consumers purchase “off the shelf” screen protectors and 60 percent purchase protective cases, according to the group’s mobile accessory survey.

“Case usage among iPhone owners is higher than any other phone type,” said NPD industry analyst Ben Arnold. “While the large selection of cases made for iPhones on the market today is likely driving much of this attachment, there are also differences in the protection motivations of owners.” He added that iPhone owners are also more likely to own multiple cases during the lifespan of their phone.

And now that the new iPhone ditched the headphone jack, this could open up a new market for wireless headphones and adapters, Lu said.

At Samsonite-owned Speck, which makes cases for a range of gadgets, in-house design team Roxana Dietrich and Iris Yu translate runway inspiration into designs that comply with the company’s “military-grade” drop standards.

For Speck’s fall iPhone collection, for which cases are $40 to $50, peacock feathers at Saint Laurent and chinoiserie at Gucci provided inspiration for new cases. In addition to Saint Laurent, Dietrich said she particularly finds inspiration in Alexander McQueen, Chloé and Jil Sander. She typically works on four trend “stories,” or themes, a year, with six to eight designs per story.

But she has to balance inspiration with protection — both for the gadget, and the case’s decoration. “I can’t make a beaded phone case, so I have to find something that translates the quality and care [of the runway look] into the product.”

Every year, the design team visits the Metropolitan Museum of Art’s Costume Institute exhibit. This year the 3-D-printed items there were “fascinating,” she said.

She said the cell phone “is an accessory that is with you all the time, but is even more precious because it’s holding this device that you can’t live without anymore.” She’s found that people are switching out cases for different scenarios. “The same type of person who would buy a new handbag for a new color is the person who will swap out [the phone case] and keep it updated, fresh and on trend.”

At Tech 21, where cases are also about $40, the design team attends both London and New York fashion weeks, looking at materials, textures, color and pattern, and add to that Pantone’s fashion color predictions. “When you choose to protect your new iPhone with a Tech21 case, we know that you are trusting us with one of your most precious items, said ceo Jason Roberts. “Mobile phones have become lifelines for personal and business use.”

A spate of designers, including Diane von Furstenberg, Givenchy, Rick Owens, Kate Spade, Rebecca Minkoff, Stella McCartney and more have gotten in on the action, and in May, a “Project Runway: All Stars” collaboration with Otterbox had designers competing to create a case. Winner Dom Streater’s two prints went into production for the company’s Symmetry Series, and cases are about $40 — a small price to pay, relatively, for a stylish safety net.