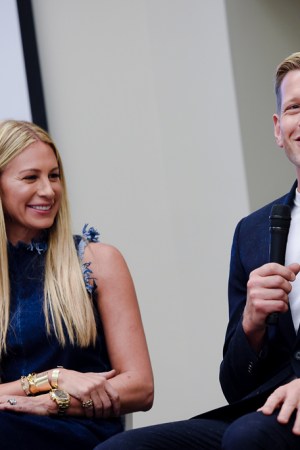 Those were the big buzzwords at the inaugural Accessories Council Summit, held Monday at the LIM College here.

The day-long event began with a data-driven presentation titled, “Consumers Are Back: Where Are They and How Do Accessories Get Their Share?” from Marshal Cohen, chief industry analyst at the NPD Group. Cohen shared that year-over-year accessories had a 3.1 percent growth in sales. Of that growth, Baby Boomers, or consumers older than 55, accounted for a 31.1 percent share, with Millennials, aged between 18 and 34, following close behind at 30.9 percent. These numbers, however, reflect a 4.1 percent drop for Boomers from the year prior, while Millennial spending up was 13.1 percent. Cohen noted that the medium through which spending is done has also changed.

“The accessory world had a 10 percent growth in the online world, compared to the average 17 percent,” he said. “Now, it’s really about doing things that are different from what we’re used to, and shattering that paradigm. We must change dramatically, and start right now.”

A discussion with Ivanka Trump moderated by Marie Claire editor Anne Fulenwider focused on the topic of “Women Who Work — How Your Mission Can Become Your Brand.” Trump, who works double-time overseeing her fine jewelry and accessory collections as well as developing the Trump Hotel Collection (which she said is the fastest-growing luxury hotel collection in the world), reported that her brand has been successful because of its priority: functionality.

“Women need functionality,” said Trump, who studiously avoided mentioning the high-profile and controversial presidential campaign of her father, Donald. “I’m thinking about how the working woman goes through the tasks of her day….With handbags, it’s about thinking, ‘Where do you put your shoes? Where do you put your makeup?’ People aren’t going home to turn around before meeting girlfriends for drinks.”

The group collectively praised the idea of “authenticity” in an increasingly digitized and impersonalized world. Kosann said that his brand’s road to success could be owed to authenticity and introspection. “When we look at our journey, I think the biggest thing we have asked ourselves, within a product category filled with so many talented designers is, ‘Why does the world need us?’ To me that is a really fundamental stepping stone,” he said of the branding process.

Palermo agreed, but was quick to point out that while authenticity is key — a brand needs to consistently re-adapt and evolve itself in order to remain relevant and survive long-term. “A brand meets you where you are and reinvents itself in a way that makes you want to keep inviting it into your life,” she said.

Rosenbaum quoted data from Havas’ franchise “Meaningful Brands” study to illustrate the importance of maintaining a strong core message and emotional connection with consumers. “[We found that] across the globe, if 74 percent of the brands around went away, no one would care. That is really powerful. In the U.S., [the statistic] is over 90 percent,” he said.

Mary Beech, executive vice president, chief marketing officer at Kate Spade & Co., spoke about digital storytelling. “First and foremost, we are a customer-centric organization,” Beech began, noting that about 70 percent of the company’s sales come from accessories. “To create good content and to tell a great story, you have to have a strong and unique voice, and a distinct brand promise.”

Beech noted that the brand does not define its customer by age or demographics, but rather four characteristics: “quick, curious, playful, strong.” To illustrate those characteristics, she showed clips from the brand’s YouTube channel featuring the actress Anna Kendrick.

Beech went on to discuss the channel of the message, or how to deliver brand storytelling to the consumer. “When it comes to digital and social media, we so often seem to be trying to change the course of a river,” she said. “At Kate Spade New York, we do not want to take our customer out of her normal behavior online. Instead, we want to put our content directly in her path to consumption.” An editorially focused listicle, for example, garnered only six likes, one comment, and seven clicks, when posted on the primarily e-commerce-focused Kate Spade Web site. When broken down into “snackable” excerpts on Tumblr, however, the same content received over 113,000 impressions.

During the Karen Harvey-moderated panel, “The Talent Mash Up Between Fashion and Tech,” Jodie Fox, co-founder and chief creative officer of Shoes of Prey; Marcelle Parrish, head of business and strategy for eBay Fashion, and Pamela Love discussed the rise in technology within the fashion world. Parrish noted that a pair of shoes is sold every two seconds on eBay, while a handbag is sold every five seconds, while Fox revealed that through the Shoes of Prey Web site, which allows users to customize a pair of shoes, there are more than 300,000 trillion possible stockkeeping units. For Love, who uses 3-D printing in her designs and boasts a large social media presence, however, data isn’t everything. “We’re still so small, and it’s all so personal to me, that data is not necessarily my focus,” she said. “Our relationships with customers is so intimate, that our e-comm[erce] manager talks to them on a daily basis. Data is less important than your gut. Right now, it’s about what do customers want from me, and how can I make their lives better. I don’t think a number can tell me that.”

The day’s event was rounded off with a conversation titled, “Break All the Rules — How to Build A Brand Everyone Will Want to Buy or Be,” that included Warby Parker’s Dave Gilboa, as well as Jennifer Fisher and Paul Andrew – led by InStyle magazine and People StyleWatch editorial director Ariel Foxman.

Both Gilboa and Fisher cited their direct-to-consumer retail model as a key factor in their success. Fisher, who recently began working with Like2Buy — a service that makes Instagram pages shoppable — said that remaining the exclusive retailer of her fine jewelry has provided her with “a lot of interesting data,” that has helped her grow her business. In an effort to further assume control over her creative output, Fisher said that “building our own manufacturing is a next step for us, doing everything in-house and not having to outsource production any longer.”

Gilboa noted that while Warby Parker started out with an online-only retailing strategy, the firm grew to understand that consumers still enjoy “the experience of walking into a store, they love engaging with people affiliated with the brand, and they love seeing an entire collection.” This year, Warby Parker will add eight stores to its current stable of 13 units. Gilboa said that, eventually, the company sees itself operating about 100 brick-and-mortar locations.