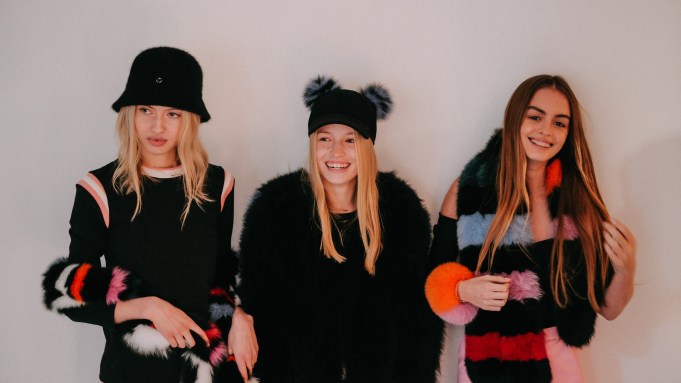 LONDON — London Fashion Week might be best known for its roster of young ready-to-wear talent, but for fall, there was a host of launches from emerging and established accessories brands alike.

Miss Leeman, a new women’s line by men’s footwear brand Louis Leeman, was one of the most anticipated launches at London Fashion Week, which wrapped up on Tuesday.

Husband-and-wife team Louis Leeman and Erica Pelosini created the line in response to demand from female clients who wanted a taste of the brand’s opulent, decorative aesthetic.

The debut collection played with the same signatures the brand is known for, including embellishment and delicate embroidery. Inspired by the mosaics, rich materials and precious jewels of the Byzantine Era, the line features pearls galore and fabrics such as tulle, fine suede and velvet.

“We wanted to create something linked with our men’s design, this was a key point. Like the men’s collection we have used embroideries, crystal and pearl applications but applied them to new shapes,” Leeman and Pelosini said. She is known for her popular social media accounts, where she shares snapshots of the couple’s jet-setting lifestyle.

The duo said pearl embellishments and embroidered sandals were key elements and they hope to establish them as signature styles.

Another footwear brand that debuted was Rue St., which launched quietly with a film presentation. The brainchild of fashion publicist Justine Fairgrieve, the brand focuses on contemporary price points and the collections will draw inspiration from a different part of the world.

“It’s for a girl who likes to wear something fun and interesting,” said Fairgrieve, adding that Matchesfashion.com is among the brand’s first stockists.

The debut collection took inspiration from London’s Soho and had a party girl feel; there were plush velvets in jewel tones, sequins and snakeskin. A royal purple pair of ankle boots with gold studs was among the highlights.

Dominic Jones’ debut collection for the British jeweler Astley Clarke was another talking point. Jones divided his inaugural collection into three parts — Astronomy, Phototaxis and Color of Calder — and enlisted girls-of-the-moment, Adwoa Aboah, Georgia May Jagger and Alice Dellal, to represent each section through campaign films.

Among the highlights were circular labradorite or ruby necklaces, representing the different planets, and modernist earrings inspired by the linear lines of Calder’s work, embellished with colorful stones.

There were also butterfly-shaped charms and earrings created in rose-gold and black and white diamonds.

They focused on reinforcing their signatures, as well as introducing pieces at accessible price points.

Charlotte Simone, best known for her colorful fur scarves, launched a series of playful, slap-on bracelets created with color-block fur in an effort to introduce a lower-priced item to her range. The rest of the collection focused on Simone’s signature fluffy scarves, reworked in a bright palette of clashing pinks, reds and oranges.

“I wanted to focus on what the brand really is about, which is the fur scarves,” Simone said.

Footwear designer Camilla Elphick, who hosted a solo presentation for the first time, also plans to introduce lower-priced pieces with a new range of customizable sneakers.

Other parts of the collection were more luxurious. Inspired by the extravagance of the food arrangements depicted in Salvador Dali’s recently re-released cookbook, Elphick used velvet and metallic leather on her latest range. She also translated her favorite food groups into embellishments, creating an array of playful, statement pieces.

A pair of pink pointed-toe pumps featured appliqués in the shape of avocados, gold heeled mules came embellished with hardware in the shape of fish, while a pair of platform velvet ankle boots — a new style for the label — had gold embroidery in the shape of kale leaves.

Surrealism also featured in the collection by Turkish-born, London-based footwear designer Dorateymur. Inspired by a tale of melancholy suburban life, he incorporated everyday objects into his latest range. Backless loafers were embellished with miniature metallic spoons, while lacquer elephants were made into the heels of pointed ankle boots and pumps.

Sophia Webster presented a collection fit for an Ice Queen, her muse of the season, complete with metallic sandals laden with oversize crystals, velvet pumps in a shade of frosty pink and diamanté-encrusted box clutches. Malone Souliers reworked its signature mules and lace-up sandals in sparkly Lurex and more velvet.

“The tiled brick work of the building runs throughout the collection, from the embroidery to the illustration inside the cases,” said head designer Charlotte Seddon of the printed fabric lining the cases.

The color palette included a range of upbeat shades such as mauve and muted yellow, which sampled from the brand’s archive.