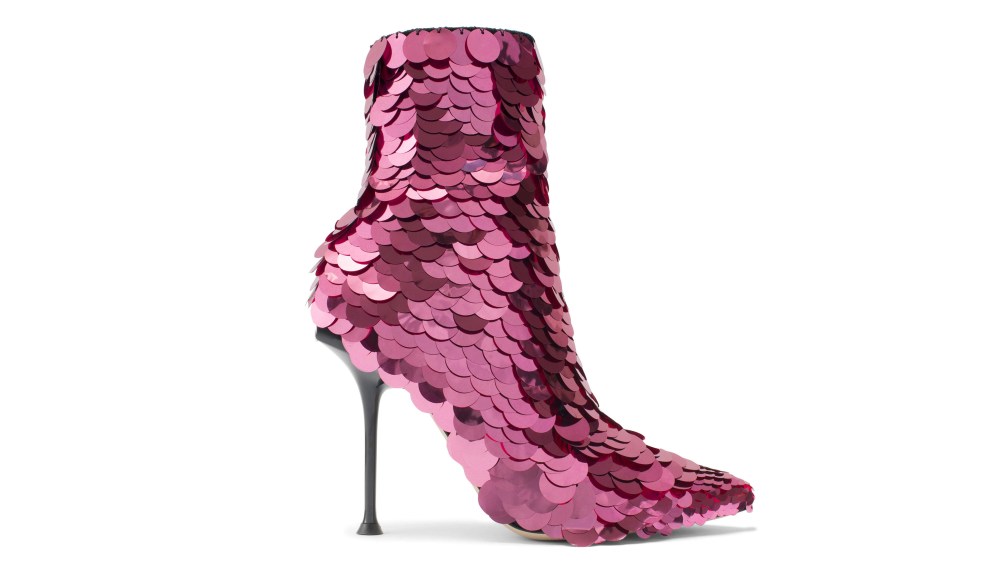 Embellishments were key for accessories brands showing in Milan, whether sporty, geometric or romantic, such as floral patterns and crystals. Convertible boots were also a thing.

Jimmy Choo: Creative director Sandra Choi wants to challenge this “busy, crazy, eclectic” time in fashion by refocusing on glamor and elegance. For fall, she picked the pearl as the hero embellishment for many key styles. Mini pearls adorned strappy sandals and a standout mule featured an all-over treatment. Evening bags also showcased multiple plays on the pearl application. Function was also top of mind for the designer, and she unveiled interchangeable two-in-one boots this season that can be worn either as tall versions or booties. Choi herself modeled a liquid gold boot.

Bulgari: Bulgari continued to add new handbag styles at it seeks to draw Millennial consumers into the Roman jewelry brand. Among the novelties this season is the Serpenti Hypnotic, a graphic rectangular style featuring a chunky chain and a modernized take on the brand’s signature snake head on the strap, which — when you wear it crossbody — sits just under the collarbone like a pendant. The brand’s research indicates that 80 percent of its customers in accessories are new to the brand, a spokeswoman said, underlining the pulling power of the segment. With an eye on the younger generation, Bulgari this season introduced the first backpack into its permanent collection, featuring a geometric quilted motif.

Gianvito Rossi: Gianvito Rossi, always a Milan Fashion Week shoe highlight, delivered another must-have collection that emphasized the feminine, elegant and wearable styles he’s known for. “It’s very intimate with all the laces and lace,” he said. But he also mixed things up with a series of rock ‘n’ roll-inspired pointy-toe pumps and sandals adorned with buckles and fashioned in a variety of wearable heel heights. “Low heels look young to me now,” he said. Another favorite of the designer’s? A vinyl bootie with white stitching. “It’s a little bit like Catwoman,” he said.

Giuseppe Zanotti: “My women change completely from the day to the night. Their uniform is totally different,” said the designer of his fall offering,  titled “Bonjour Nuit.” Statement styles included suede sandals adorned with crystals, plexiglass and purple feather detailing. A new geometric heel, in gold or steel, was paired with soft stretch leather boots. Zanotti also is offering up some new convertible boot looks — which can be worn as boots, booties, or even pants.

Sergio Rossi: This season, the refueled Italian label unveiled its new SR Milano collection in the historic Teatro Gerolamo, originally built in 1868. Inside, colorful revolving geode displays provided a cinematic backdrop for the shoes — which all featured a squared heel and metal plate first used in the brand’s SR1 collection. Standouts included booties decorated in oversized paillettes and grommet-laden leather pumps. “There is one element on the heel that unites all of the shoes,” chief executive officer Riccardo Sciutto said. “The heel is black, with the metal plate that is found on the front of the SR1 shoe.”

Giannico: Young talent Nicolò Beretta made a major statement by debuting a cheerful pop-up store and presentation space in the center of the fashion action. This season, Beretta’s classic embellished mules and pumps were fashioned in a fresh way. “I really love the [Daphne] styles — they’re classics of mine now,” he said. “We translated them in all the rainbow colors. The yellow is a personal favorite. It’s so chic.”

Fratelli Rossetti: The heritage brand is refocusing on its iconic tassel loafer, the Brera, which turns 50 this year. This season’s key style is a colorful embroidered version, with the name of the shoe written on its side. Other models featured charm embellishments and tassels with a metal logo.

René Caovilla: “How do we make our shoes sexy without Swarovski crystals?” That was the question Edoardo Caovilla asked himself as he developed René Caovilla’s new Opanca pump for fall. The black and white style features a four-inch heel and suede upper paired with a rubber sole that plays up the lines and waves. Of course, the label still offered up plenty of sparkly looks, including a pointy-toe leather bootie decked out with geometric jewels and the Crystal Net, a classic stiletto sandal that incorporates an elastic net adorned with Swarovski crystals.

Hogan: Hogan imagined an interplanetary journey for its Galaxy collection with its platform sneaker remaining central in the lineup, embellished for fall with a sparkle motif or with new iridescent pastel colors. Metallic hides were paired with rainbow platforms in hues ranging from silver to gold and pink. Hogan introduced a new dipping technique to treat its sneakers, which looked as if they were dipped in a white, rubbery substance meant to resemble materials from outer space.

Valextra: Displayed against a backdrop of sectioned planks of cedar wood in an installation created by architect Kengo Kuma, a series of add-ons personalized Valextra’s structured bags with woven ropes and metal chains as shoulder straps, or fuzzy wool covers, each handmade by artist Rebecca Robinson with a traditional loom technique. New double-face down feather duvets in bright colors also dressed up the bags. Valextra also introduced silk foulards and T-shirts illustrated with vignettes of owls, a deer, a bear and other fauna created by Italian street artist El Gato Chimney.

Casadei: Casadei celebrates six decades in 2018, and the Italian luxury mainstay has several product stories to toast. For fall, fantastical western-inspired boots came decorated with a necklace of multicolored stones. “This is a new remake of one of our iconic styles,” Cesare Casadei explained. The creative director also continued to evolve the iconic blade heel with the addition of the architectural X Blade and a kitten-heel version.

Furla: Sportswear was the starting point at Furla, which presented a collection of handbags with technical details from the world of sneakers. A puffer tote with leather handles stood near a bag with an oversize panel and metallic chain, and floral prints as well as faux-fur elements added a romantic touch to the lineup.

Samuele Failli: For his third season, the emerging designer — who racked up years of experience at major houses in Milan and Paris — was inspired by Seventies haute couture. Elegant draped knots embellished a series of boots, while V-shaped ruffles dressed up other key styles. Sandals were decorated with sculptural flames.

AGL: Comfort might be cool right now, but the Attilio Giusti Leombruni sisters have always designed their shoes to be wearable. For fall, the daywear-driven brand introduced some standout patent boots. A new shiny leather block heel was also incorporated on many key styles, and cowboy boots came with removable leather straps.

Coliac by Martina Grasselli: Western touches, jewelry embellishments and edgy shapes spiced up this emerging shoe collection, which is also quickly growing its ready-to-wear line. For fall, Martina Grasselli is rolling out more feminine shoe silhouettes, such as pointed pumps with sculptural kitten heels in the shape of hexagons. Swarovski flowers served as sparkling snap closures on derby shoes.

Geox: The comfort-driven label is upping its emphasis on contemporary styling. For fall, new styles included military-inspired boots. For evening, there were dressed-up slingbacks and brocade ankle booties. It’s a big year for the brand, which recently hired its new ceo, Matteo Mascazzini, from Gucci. “We have this amazing wealth in terms of the history, storytelling and DNA of the brand,” he said. “It reminds me of Gucci.”

Racine Carrée: Designer Viviana Vignola transformed the Ex Cinema Arts into a space inspired by Wunderkammer (rooms of curiosities that nobles created in 16th-century Europe). Vignola’s five “Wunderboxes” included one with graffiti-printed boots, another for black shoes only, a red room of cutout heels and boots, a black-and-white theme of boots and flats done in studs and accordion pleats — and one glittering room of crystals that displayed a pair of Swarovski-crystal-embellished cutout, lace-up heels.

Rodo: The brand, which is busy plotting its comeback in the U.S. market, played up woven styles across both the shoe and bag collections. Velvets, eco-fur and laser calf with brocade effects were key material stories. Neutral tones dominated.

Church’s: The heritage player is getting some interesting new updates for fall. The label is focusing heavily on a new tartan series and also gave its classic styles a punk flavor with studs — all very British.

Cambiaghi: The look of South American Cholitas women inspired Cambiaghi’s collection, which included felt hats with rigid constructions embellished with colorful, graphic Andean fabrics. The brand also developed its bag range, focused on the Gilda style, which was presented in a wide range of variations, from suede options in natural tones to calf styles punctuated with studs.

Borsalino: For fall, Borsalino reworked classic silhouettes which were re-proportioned and exaggerated for eye-catching hats. The timeless fedora style was also updated with bright colors and flamboyant embellishments, including multicolor feathers punctuating a hot pink style.