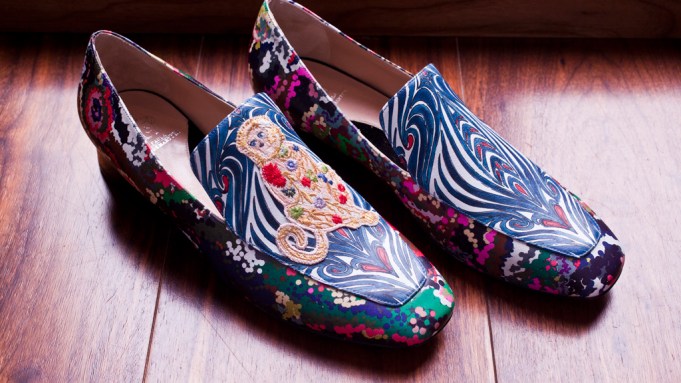 Off the runways, accessories designers show their fall wares at Milan Fashion Week.

BULGARI
Bulgari infused the same glamorous and elegant spirit of its jewelry collections into its fall accessories, all crafted from upscale materials and enriched with precious details. Snakeskin with a sophisticated dégradé effect was used for a mini shoulder bag with a gold closure embossed with the Bulgari logo. Multicolor rhinestones punctuated a range of styles, including clutches, worked both in leather and exotic skin, while fur accents gave a twist to classic day handbags.

DESA NINETEENSEVENTYTWO
A classically furnished room in the elegant Baglioni Hotel Carlton served as the discreet backdrop to Desa Nineteenseventytwo, a high-end Turkish label that is “all about timeless, understated luxury” using minimalist, architectural shapes, said owner and chief executive officer Burak Çelet. Structured and soft forms combined in a hobo bag that stood up with a solid base and sides, and in a firm cylindrical feed bag with a contrasting suede drawstring closure. Desa introduced this bronze colored satchel with pyramidal handles and triangular leather instarsia panels. The bags have lambskin exteriors and goat suede lining. “If I hadn’t become a purse designer, I would have become an architect,” said creative director Tonya Hawkes, “For me, it’s always about looking for a twist, having something special.”

BERTONI 1949
A lush neo-Renaissance palazzo-museum set an aristocratic tone for luxe handbags from Bertoni 1949. Styles included miniature structured travel pieces from the 20th century, like leather-covered wood hat boxes, trunks and suitcases. Bertoni’s latest collection taps its ongoing theme of the American Dream, this time in the free-spirited nomadic attitude of American culture. Called Nomad’s Land, it recalls the lives and craft traditions of wanderers through patchworks of precious skins, hand-painted paisley patterns inspired by bandanas, wood-printed leather, and the blue and tan hues of earth and sky. Bertoni introduced this graphic flap bag with a saddlebag shape embellished with leather-covered studs.

CHIARA FERRAGNI
The party was packed and the bar open in the scarlet interior of the subterranean nightclub where Italian blogger and designer Chiara Ferragni showed her shoes. “Born to Be Wild” — the song set the mood, and was also the name of the collection, which Ferragni said “is about being brave and wild, about the freedom of choosing your own path, like I did.” Ferragni, who now lives in Los Angeles, drew inspiration from road trips through the deserts of the American West to introduce a series of flamboyant cowboy boots: some with big glittering stars, others with metallic chevron stripes, still others with large grommets. Ferragni is shown here with thigh-high versions with flame stitching up the leg.

LE SILLA
“More than an inspiration, it was a feeling for warm materials like velvet, and colors that really wrap you up,” designer Enio Silla said of the idea behind his collection. He offered simpler styles with a distinctive knot detail, Baroque decorations and Borgia-inspired embroideries, as well as a must for Le Silla: crystals. For fall, the brand presented a capsule with Swarovski in gold, silver and ochre hues strategically positioned under spotlights for high-wattage sparkle.

BORSALINO
Borsalino showed its newest capsule collection with Italian clothing company and distributor Slam Jam. Under this collaboration, the long-established hat company added a street-culture take on its classic shape, eliminating the headband but keeping a ribbon in the same color. There were also velvety baseball caps and bucket hats in striking red, orange and purple. The main collection, displayed in Spazio Borsalino’s garden on a metallic swing construction, showed traditional shapes in neutral blacks, grays and blues, updated with bands in bright colors and pastels. Top hats, bowlers and a dressage hat from 1800 were part of Borsalino’s Replica project, which brings archival pieces back to life.

VALEXTRA
“We want to explain the personality of the brand through the women of Milan and their rigorous bon ton,” said Sara Ferrero, chief executive officer of Valextra. But just as the city’s gardens remain hidden behind austere facades, there’s more than meets the eye to the Milanese woman, she observed.

Hence, the lining of the brand’s new Triennale bags in total black — metal details included — came in a surprising shade of bright yellow. Intarsia Bakelite magnets embellished other Valextra totes that were rendered in a fun, rainbow palette — new shades that are not readily associated with the brand, from orange to turquoise.

Another novelty: cream bags with intarsia superimposed panels that created a black “X.” “This can mean: I choose you or not…or, it’s a kiss,” Ferrero said.

SERGIO ROSSI
A round staircase covered in textured burgundy velvet and a sparkling chandelier served as the stage for Sergio Rossi’s presentation of dainty ankle-strapped d’Orsay pumps and soft velvet platform sandals with jet sequins. “I was thinking of the unconventional, emancipated flapper dancers from the Twenties, and the divas making an entrance walking down the staircase,” said creative director Angelo Ruggeri, who continues in that role under the new ownership of private equity fund Investindustrial. To be sure, an exquisite sandal with a single strap of velvet wrapped around the ankle will take any dancer late into the night.

JIMMY CHOO
Standing atop gilded columns in a dreamy golden room, Jimmy Choo’s Belle Epoch and military-inspired collection fused tough with sensual, constraint with liberation, and robustness with romance in exquisite tension. “To me you need to have that [contrast] to stir something up,” said creative director Sandra Choi. The two-piece booties shown “are lace-up, like combat boots, and have a little bit of corsetry. They are restraining, securing something. And the tactility of the velvet gives it artistry — an artisanal quality — with a richer tone than black. The color brings the whole thing alive.”

CHURCH’S
Church’s added silver studs to its staple Oxfords in brown, black and white, but also introduced velvet slippers decorated with crystals. One pump featured a large flap on the vamp that gave a feminine touch to the masculine style.

CAR SHOE
At Car Shoe, the pebbled sole of its driving shoe was re-elaborated on a furry ankle boot. Thick-soled sneakers with a black and white cow-spot pattern and sneakers adorned with crystals rounded out the lineup.

AGL
Marianna Giusti designed the nature-inspired print for this laser-cut calfskin ankle boot with a block heel by Attilio Giusti Leombruni. The Giusti sisters at AGL pushed toward greater femininity in their androgynous mixes, sometimes achieving the hyperfeminine — like the application of the laser-cut print in low-heel, pointy-toe slingbacks with fur pom-poms. More often, they created surprising contrasts, like combat boots with floral embroidery and hand-painted, gold-brushed laces, or forest green patent leather high tops with velvet laces and fur-covered vamp.

FURLA
Furla offered a new take on its hit Metropolis bag with the Bolero model, showing a laser-cut design and gold details on the flap with a leather and chain strap.

PAULA CADEMARTORI
Paula Cademartori introduced asymmetric loafers with colorful hand drawings printed on leather and a hand-embroidered monkey on the right shoe to pay tribute to the Chinese year.

GIANNICO
These makeup-inspired dusty pink and brown wedges by Giannico sport the debut of the fledgling brand’s signature buckle, incorporating its lip and quilting motifs.