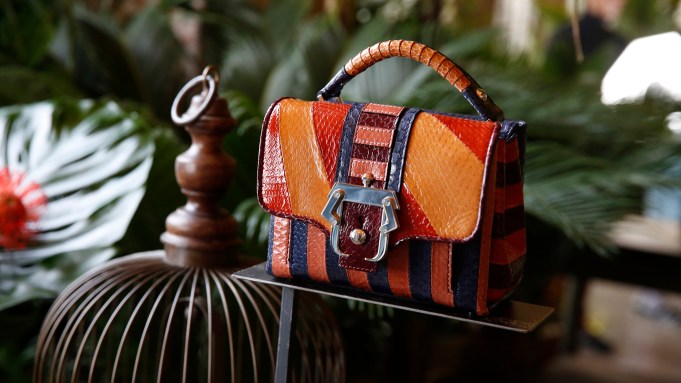 Women’s accessories for fall were anything but understated. Brands played with vintage looks and tantalizing hybrids, lush materials and surprising combinations. Resplendent, unapologetic femininity reigned. Casual styles came in flamboyantly precious variations, while evening shoes could even be comfortable.

Paula Cademartori’s collection of handbags and shoes was inspired by a winter garden, with colorful blooms rendered in a variety of techniques, including calf leather and suede intarsia. Among the novelties this season was the Twi Twi, a small bag with a pocket for credit cards that comes with a cross-body strap.

“I like to do things that can make an outfit. I don’t do clothes — yet — but I wish that I will one day do the brand in a 360-degree way,” said Cademartori, whose brand was acquired last October by Renzo Rosso’s OTB group.

For fall, Elena Ghisellini revisited some of her staple designs. “I wanted to bring together the most iconic bags from my past collections,” she said at her presentation, where each bag was creatively displayed in glass stands. The result was an array of her distinctive color-blocked and graphic designs, ranging from one of her favorites, the cat- inspired optic clutch, to cool padded leather totes. She also played with textures and injected a sense of opulence via velvet and fur touches, as shown on a red jeweled velvet clutch and a fun red, white, black and orange furry number.

Bertoni 1949’s collection ran the gamut from bags emblazoned with graffiti referencing its heritage to more sophisticated styles. Highlights included a rigid boxy oxblood leather handbag embellished with gold studs, as well as velvet versions — in mustard or silver — that combined a soft and rigid structure.

Furla celebrated its 90th anniversary with a limited-edition collection of nine special flaps to customize the Metropolis bag’s leather body — one for each decade. The fall lineup also included totes with animal prints, graphic designs and marine inspirations, as well as an expanded collection of shoes including furry boots, ballerinas with grosgrain bows and colorful toes, and sandals with metallic details.

AGL Attilio Giusti Leombruni reflected the taste of each sister behind the collection, Sara, Marianna and Vera, ranging from revisited Texan boots to feminine and dressy kitten-heel pumps made with fabrics used for ties or velvet boots with ribbons, and more conceptual platform sandals with furry or mirror details. “Would we wear it? This is the question we always ask ourselves before we put a model into production,” said Sara Giusti Leombruni.

The brand’s staple luxury sneakers came in felt for fall, and maxi-sneakers and mountain ankle boots were made cozy by the use of shearling. “We celebrate 30 years in business and we are going back to our roots, focusing on accessories and shoes in particular,” said Andrea Della Valle, the company’s president, referring to a return to a static presentation of footwear after developing ready-to-wear for a few seasons.

Sandra Choi, Jimmy Choo’s creative director, riffed on some of the brand’s classics and also challenged herself with a host of new shapes, playing with ideas of hard and soft, tough and sweet. The most opulent pieces were the standouts. They included velvet kitten heels with chunky jewels dotted across the vamp, soft crushed velvet booties and over-the-knee boots and towering sandals with poufs of fox fur at the back.

One of Choi’s personal favorites was a court shoe with a high cut and a glittering ankle strap. Heels ranged from the classic Choo stiletto to a wider, flatter “Sly” heel to a micro-kitten style. Suede hiking boots with jaunty pom-pom details and a side-buckle studded boot inspired by a creeper gave the collection a tougher edge.

How could Sergio Rossi top last season’s ballet performance? The answer is with a surreal installation courtesy of Patrick Kinmonth and Antonio Monfreda. The creative duo set up an elevated glass and stainless steel structure that showed models walking in the shoes — but only from the knees down. Kinmonth said they approached the project with “affection and a great sense of playfulness,” while the brand’s chief executive officer Riccardo Sciutto said he wanted the show to relay a sense of motion more than anything else. “You cannot have shoes just standing on a table,” said the executive, who plans to launch a new online concept store for Rossi in April.

Models in sheer white dresses edged with tiny LED lights walked round and round the structure in high black or white boots with studs and square toes, stilettos with a copper triangle pattern, and booties done in silver leather or a green, black-and-white leather intarsia. Fur scuff slippers and high-heel sandals, also with fur, added a soft edge to this sleek collection.

There was a lavish glamour to this collection by Brazilian designer Alexandre Birman, what with all the velvet, brocade, iguana, glitter and crochet that swirled through his creations. The fall collection ranged from the romantic — as in boots and kitten heels done in pink velvet and brocade — to the sexy, as in platform sandals with chunky, contrast velvet knots at the front.

There were edgier designs, too, including cream iguana-skin boots and disco sparkle heels in black — like a night sky — or silver, like stardust. There were some charmingly off-kilter designs, too, such as colored patchwork rabbit fur slippers that would brighten the dreariest of Milan days, and a low-heel, lace-up court shoe with a Twenties flapper flair.

Gianvito Rossi’s collection ranged from the lavish to the cozy, and also marked the launch of his first men’s line, which he designed to suit himself. “I wanted an elegant shoe with modern proportions — and I didn’t want it to be green — or have studs,” said the designer. He displayed velvet slippers, suede lace-ups and Chelsea boots — all with a wider vamp and rounded toe, a shape he feels is missing in the market. Rossi feels so strongly about them that he’s opening two stores this year, one on Via Gesù in Milan and the other in Paris, on Rue du Mont Thabor, across the street from his women’s store.

The streamlined men’s offering was in stark contrast to his women’s creations, which ranged from brocade stilettos to knitwear and suede boots.

For its 80th anniversary, Valextra launched the Passepartout, a versatile bag that can be worn as a top-handle, a tote, or a duffel. It has a removable front pocket. Inserts and flaps in a variety of furs or wool give flair and personality. The brand’s Iside bag was decked in thick fur covers for its handles and a Seventies style, transparent removable “raincoat.”

Borsalino’s self-proclaimed hymn to freedom was an ode to vintage in muted autumn shades, subtly scenographic details and an explosion of varied hatbands in precious materials. Laser-cut flowers bloomed on the broad brims of Seventies velvet felt hats. Bouclé wool and mohair debuted in Tzarina and Baker Boy caps. A Nick Fouquet capsule collection took cues from the Seventies gangster film “Borsalino,” like burnt cards or matchsticks tucked in the hatband, and carefully staged signs of wear, like a bullet hole, stitching or roughed up spots.

Travel to Southeast Asia in Les Petits Joueurs’ collection with cultural influences from Bali, Singapore and Hong Kong. Red-beaded fringe hung like the sun from a black handle purse with beaded golden rays embroidered up the face; a white fur moon fluffed from another. Velvet and shearling wool complemented other luxurious materials worked into artisanal pieces of Florentine craft. Charms were overlaid with fine fur, geometric design printed onto leather, poms and intricate studding.

Giannico took inspiration from the colors, lights and elements of 17th-century Flemish paintings. Sinuous buckle-shaped, brass-colored ornaments adorned with a single pearl gleamed on the toes of a range of models: dark jewel-toned velvet flats with pointed toes, mules with chunky heels and boots. A separate area of the collection paid homage to the late Franca Sozzani, editor in chief of Vogue Italia, with fine-strapped stiletto sandals in colored snakeskins and strappy pointed pumps.

Moncler Lunettes launched its first collection of eyewear referencing retro glasses from the brand’s roots on the ski slopes of the Fifties, but also other eras, like ski goggles from the Seventies, Jackie O-like round shapes from the Sixties, cat eye women’s frames inspired by Thirties mountaineers, and double-bridge metal frames, also from mountaineers of a bygone era. Other frames featured soft down jacket and quilted effects. Frames were in step with trends like mixed materials, masks, superimposed effects and classic colors like tortoise shell, black and metal. Eyewear mascots “Mr. and Mrs. Moncler” were on display to facilitate viral spread through social media.