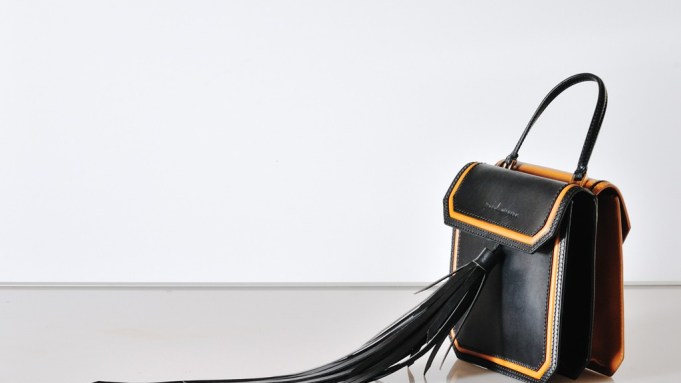 Lifted by a vigorous worldwide appetite for luxurious Italian bags, leather goods and accessories outperformed the sector in terms of exports, posting a 12 percent rise in the first five months of 2013, according to AIMPES, Italy’s leather goods association.

This compares with a 3.4 percent drop in value terms over the same January-to-May period experienced by Italian textile makers for example, who saw their sector shrink both in terms of workers and mills.

“If the same trend experienced in the first five months of the year continues, we should see overall sector revenue in 2013, more or less stable with 2012,” said Mauro Muzzolon, general director of Mipel and of AIMPES.

“The domestic market is still experiencing a difficult depression. Not even a heavy dose of Prozac could help Italy out of this crisis,” Muzzolon said.

Tom Kalenderian, general merchandise manager and executive vice president of men’s at Barneys New York, said Mipel remains a key fair for the retailer and is one of the most important sources of leather goods truly Made In Italy.

“We have a clientele that are not only accustomed to Italian artisan workmanship, but they come to expect it. Mipel has been a stop on our world tour for over 30 years, to find the best in class,” Kalenderian said, noting that Barneys aims to increase its presentation and turnover in men’s accessories this year and next.

This year, upmarket leather goods brands witnessed a rise in the price of exotic hides like alligator, crocodile, ostrich and snake, due to consolidation of the major tanneries that refine those hides.

Milan-based Leu Locati, a high-end handbag and shoe maker that prides itself on accessorizing first ladies and royals like Queen Elizabeth II, also saw the price of crocodile jump 20 percent this year compared to last.

“Nevertheless, we will probably see sales increase about 20 to 25 percent in 2013,” Paolo Amato, the company’s president said, citing strong sales from Asia.

At the fair, Florence-based Braccialini Group revealed ambitious expansion plans for its brands Gherardini, Braccialini and Francesco Biasia. Group chief marketing officer Lorenzo Braccialini said the focus for the group into 2014 and 2015 is expansion in Central America and South America, where it doesn’t have a presence.

“I wouldn’t exclude an opening for Gherardini in Mexico in 2014. We would like to penetrate Brazil in 2014, and would like to expand with all three brands,” Braccialini said.

This year, Braccialini Group will have opened five Braccialini stores in China, one in St. Petersburg, Russia, and one Gherardini store near Shanghai.

Infusing some celebrity pizazz into the fair was heiress and self-branding expert Paris Hilton, who presented her namesake bag and accessories collection. Taking iPhone shots of her line and posing with fans, she even modeled in her own fashion show.

Fringes, floral prints and perforation were among the main trends at the fair, according to Alessandra Rossi, commercial director at multibrand Yoox Group, adding shapes will include “the hobo as well as the return of the bucket bag.”

Among other key trends:

Weightless: Brics unveiled its hard-case Bellagio Pullman series in many sizes from the cabin trolley to a lightweight 32-inch packing case.

Artisan: Araldi 1930 showcased an impeccable array of men’s bags and accessories — from computer cases to weekend bags — enriched with a repetitive organic hand-burnishing process for a dusky border effect.