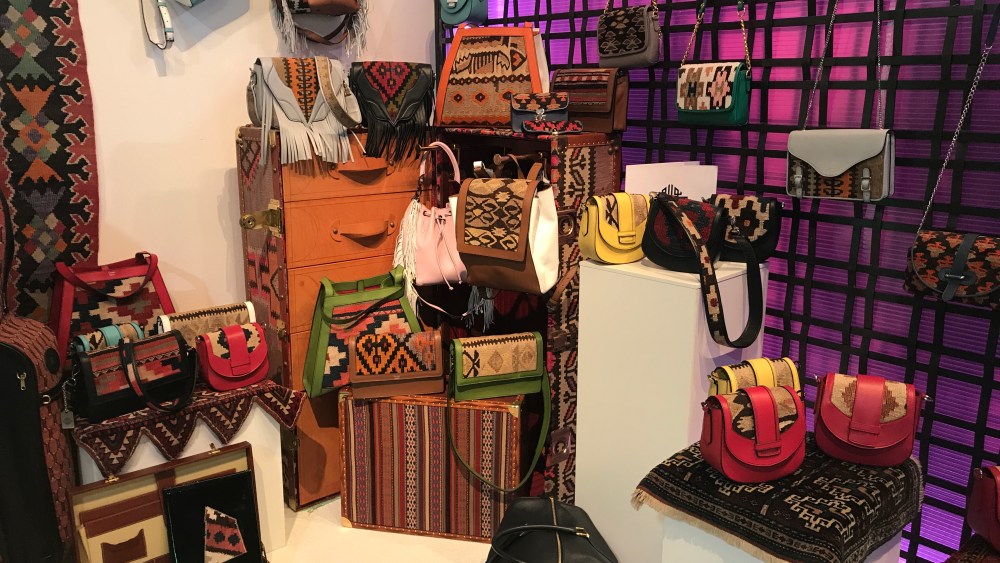 MILAN — Handbags and accessories trade show Mipel, which ran in Milan Sept. 17-20, saw a 17 percent uptick in visitors and a 10 percent gain in exhibitors year on year.

Pop Art, jungle themes and strong colors were the main trends of the 112th edition, helmed by new chief executive officer Danny D’Alessandro. Inspiration also came from Andy Warhol as the fair was dedicated to the artist, with 2017 marking the 30th anniversary of his death.

Colors and geometries reminiscent of Pop Art works defined the spaces of the pavilions and the companies’ layout, while the trade fair expanded its borders from Rho Fiera to the city with “Andy Warhol from New York to the Stelline,” an exhibition staged at Palazzo delle Stelline until Oct. 29. Warhol’s original canvas “The Last Supper” is on display at the venue, which is in front of  Santa Maria delle Grazie, home to Leonardo Da Vinci’s masterpiece of the same name.

“Despite an improvement in the Italian leather industry in the first five months of the year, we have to be cautious,” explained Mipel president Roberto Briccola, who is also ceo of the family-owned firm Bric’s. Italian exports last year showed a nearly 15 percent increase, exceeding 3 billion euros. “But these numbers are often made by bigger groups, while Mipel showcases some of the numerous small Italian companies which need to be pushed forward.”

According to Briccola, it is key is to push on internationalization and to mix tradition and innovation, investing on the most promising companies and on younger brands: The Glamourous and Scenario were Mipel’s two special areas, dedicated to the most innovative creations. The Glamourous was sponsored by Camera Nazionale Buyer Moda, Italy’s buyers’ association, which particularly emphasized young designers, while cutting-edge brands stood out in the Scenario area. Here the collections were made of uncommon combinations of materials such as feathers and wood combined with leather by brands including HMT Bags, Gianni Segatta and Harleq.

“Trying to follow both the old and a completely new path means we will also keep developing our skills while trying to support our small companies more than ever,” said D’Alessandro. The goal is to allow them to compete on an international level by creating a team that will act like a broker, thanks to the partnership with managers from a fashion background.

Of the same opinion was Riccardo Braccialini, president of Aimpes, Italy’s leather goods association. “We definitely prefer to leave room for the young and the new projects — we have done it during the most difficult economic years and now we’re reaping the rewards.”

These rewards can be seen in Mipel’s numbers, lifted by Russia, whose market has started to show gains again with a 5 percent increase in Russian visitors, and from Ukraine, up 29 percent.

Braccialini’s family company is going through some major changes following its acquisition by Tuscan Graziella Group earlier this year. Unlike his brothers, Lorenzo Braccialini is the only one who’s working in the new company and underlines that “the new collections follow the historical Braccialini mood” — a tropical mood to be precise, expressed through toucans and flowers, bees and leaves on satchels and cross-bodies, totes and backpacks. Colors are inspired by the jungle, too: green, fuchsia, yellow and black.

A colorful and joyful mood was central at Massimo Braccialini’s new brand MBRC, which he just founded. The label targets a medium-range spender. The star logo stands out on many items while bags hand-painted by the designer are the most special looks.

A candy shop inspired Ripani’s collection. The Italian company displayed accessories named after sweets, such as Meringa [meringue] and Waffle, Muffin and Glassa [glaze] collections. Soft shades of wisteria, pink and light green were seen on satchels, clutches and shopping bags together with brighter hues such as lemon and orange. “Cooking and sweets above all have a very strong appeal on everybody” said owner Gabriella Ripani. “We therefore decided to follow this trend combining the names and the colors of candies to our collections.” Ripani’s distribution goes from the U.S. to Japan, but the the most important signs of an uptick come from Russia, showing a recovery.

Asian and China in particular are the most promising markets for Gabs.  One year after the acquisition of the brand by Campomaggi & Caterina Lucchi, president Marco Campomaggi underscored how important for the company it is to expand in China. Its stand at Mipel was a trip through a rainbow — from turquoise and lemon to pink. There was also a capsule collection in a partnership with Fiat, presented earlier this year.

The upbeat mood was evident in the luggage collections, too, from Bric’s, which is known for its pure, classical travel bags, to the handmade leather lineup created by Portuguese architect Ruben De Abreu, now based in Miami, or the new Spazio Tempo brand, born from master clockmaker Alessandro Msellati.