A cornucopia of bejeweled accessories emerged in the run-up to the holiday season and price doesn't seem to be an object.

By Katya Foreman and Lucie Greene on December 3, 2007
View Slideshow 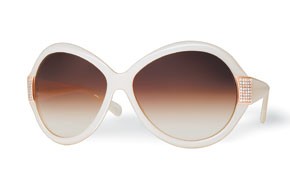 PARIS — A cornucopia of bejeweled accessories emerged in the run-up to the holiday season and price doesn’t seem to be an object.

Some notable items include Taryn Rose’s $250,000 slippers adorned with a diamond-encrusted flower at Harrods, and Oliver Peoples’ limited edition Harlot sunglasses, exclusive at Colette in Paris and priced at about $20,000.

Even Chanel, whose founder famously embraced imitation baubles, has dabbled in diamonds for its cruise collection in the form of a limited edition line of white alligator bags with double-C clasps encrusted with 334 diamonds.

“It’s not razzle-dazzle,” Karl Lagerfeld said of the line. “It does not even look like real diamonds.

“Nothing is more luxurious than [something that] looks fake but is actually real,” he continued, adding there may be more diamond-sprinkled accessories to come. “Why not? In the past, women used to have real gold chains for their handbag made by a jeweler from Place Vendôme.”

The jewel trend appears ready to endure, if on a niche basis, feeding into luxury retail’s expanding appetite.

Burstell pointed to Kara Ross, Darby Scott and Monica Rich Kosann as ones to watch in the precious accessories domain.

“I think people are looking for truly luxurious pieces that are one of a kind,” said Beverly Hills-based designer Taryn Rose, who for spring will propose custom-made shoes featuring ideal-cut diamonds by Lazare Kaplan, with prices beginning at $90,000.

“With more millionaires now than ever in history, people with wealth are looking to distinguish themselves from others,” said Rose, adding the weak dollar has made even the most extravagant pieces “a bargain” for international shoppers.

“What was traditionally considered luxury is no longer luxurious enough for the stratospherically rich, who want to set themselves apart with things only very few of their stratospherically rich peers can afford,” said Devi Kroell, who, after demand from clients, is working on a line of special-order gold evening clutches adorned with diamonds, sapphires and emeralds. “You will not see those exposed anywhere, except if you bump into the owner at a dinner party or gala.”

Renè Caovilla, Renaud Pellegrino and Asprey are among established designers and brands planning gem-embellished bags for next fall, and Christian Louboutin disclosed he’s cooking up a jewel-related shoe project.

“It’s a niche for people who have the money and the fantasy,” said Louboutin, whose recent private commissions include a pair of sandals paved in strings of rubies for a client from the Middle East, as well as a precious T-strap for a client in Los Angeles mounted with pearls and emeralds.

“It is slightly obscene,” conceded the designer, adding diamonds on heels are a definite no-go area. “Can you imagine the damage if the heel got scuffed?”

In February, Renè Caovilla will open a store on Rodeo Drive to feed growing demand among the Los Angeles’ elite for superlative shoes.

“The States is our second biggest market after the Middle East,” said Caovilla’s daughter, Giorgia, adding the opening will be celebrated with a limited edition shoe line that can be made to order with precious stones.

“Women there have so much money to spend,” she said, disclosing that the brand also is planning a jewel-embellished bag for next fall.

The piece would be a follow-up to two limited edition serpent sandals that were showcased at Harrods and Caovilla’s Parisian flagship in October.

Priced at about $130,000, with diamond-, ruby- and sapphire-encrusted hardware, Caovilla so far has received one order from a Saudi Arabian princess.

For retailers, dealing in diamond-rate goods often means keeping orders to a minimum because of security measures. A live Egyptian cobra was even brought in by Harrods to guard Renè Caovilla’s serpent sandals, for example, bringing new meaning to the expression “killer heels.”

“Folding jeweled pieces into my main collection would be oppressive, as it would involve full-time store security,” Louboutin said. “I like to indulge in it from time to time simply because I so enjoy working with [artisans].”

The complexity of conquering two areas of expertise, both the gemology and leather goods domains, also keeps players to a minimum.

“These pieces are not that readily available. It isn’t the easiest thing to do and not everyone has the right sensibility,” said Burstell, adding price tags come accordingly high, ranging from the low thousands to $110,000 for a bag by Darby Scott. “The work and time and thought dedicated to these pieces justify the price. They’re incredibly detailed.”

Abigail Rainer, the fashion accessories and fine jewelry director for Harrods, whose goodies include a diamond-set Hermès Birkin handbag for more than $140,000, said, “There are not very many brands who can make the investment in the stones nor have the expertise of setting them.”

New York-based jeweler-turned-bag-designer Kara Ross is one of the industry’s most talked about new talents. Since her launch a year ago, the designer is distributed in 11 stores internationally, including Bergdorf’s, Wynn Las Vegas, Browns and Joyce.

“We have very small production runs, as every stone is hand-cut to fit the hardware, and every skin hand-stitched,” said Ross, who is working on two diamond-embellished clutches for the Oscars.

“Sourcing stones is also an art,” she said, explaining how stones must not have inclusions, for example, or be affected by color-zoning, where heavy concentrations of color form in one area. Even for a trained gemologist, production can be “a headache,” she said.

In addition to bags and shoes, the jewelry trend largely has been pioneered by the eyewear sector, notably one of the first foreign categories to have been adopted by fine jewelry brands. Chrome Hearts, Barry Kieselstein-Cord, Gold & Wood and Oliver Peoples are among the eyewear players to have added jewels to their frames.

“We wanted to raise the bar,” said Farrow director Simon Jablon. “Sunglasses as a fashion item are something people more and more are spending on….People are now looking for an extra level of exclusivity.”

Jablon said the line will be available at stores such as Quartier 206 in Berlin, Alothman in Kuwait and Joyce in Hong Kong. Retail prices will range from $900 to $20,000.

Soliman Marcelli, head of communication for the high-end Luxembourg-based eyewear brand Gold & Wood, said there has been unprecedented demand for diamond-embellished pieces.

“Demand is coming from nouveau riche customers in emerging markets such as Russia and the Middle East,” he said, noting that jewelry-embellished products, which represent around 20 percent of stock, are experiencing healthy growth. “It also offers high profit margins.”

Jewelry designer Theo Fennell, who recently folded precious eyewear into his range, said, “Fine jewelry and gold has been used on glasses for centuries — just think of all the kings. On a commercial level, it has been less so recently because people are very much less opulent, but that is changing.”

— With contributions from Lucie Greene, London