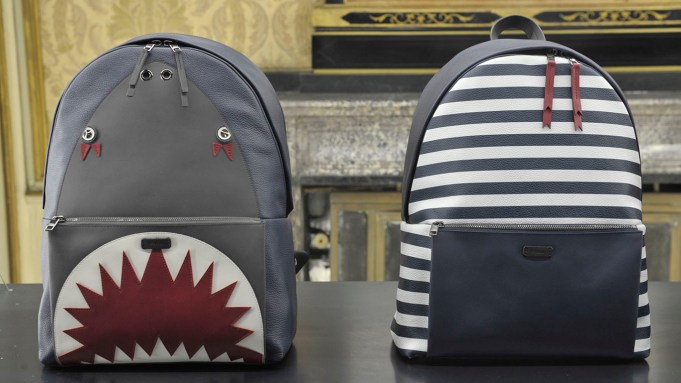 MILAN — Accessories brands presenting during Milan Men’s Fashion Week hit many of the same notes as those found on the runways of their fashion cousins. Stripes, embellishments, unisex styles and loads of color were among the main trends for spring 2018. Here, a roundup:

GIUSEPPE ZANOTTI: Giuseppe Zanotti said the collection stemmed from Nineties images à la “Miami Vice,” and the result was a “super positive, colorful and unconventional” lineup. Loafers in washed and ripped denim were adorned with small slabs of mirrors and crystals. The patent smoking shoe was modernized with a big grosgrain bow. Zanotti also emphasized a new “liquid camouflage” print on sneakers, a pattern that seemed melted from the heat wave hitting Milan.

SANTONI: This season Santoni wanted to offer an Italian breakfast experience at the Royal Palace in Milan, with waiters parading the latest models on silver trays, which telegraphed a cheerful and playful mood. Chief executive officer Giuseppe Santoni emphasized the special construction of the company’s wing tips and slip-ons, “super soft and flexible, even in alligator skin.” To wit, they can be folded and slipped in a pocket, returning to their original shape once unfolded. Double monkstraps came with fringes in total white. What could be more summery than that? The highly crafted intrecciato woven motif rejuvenated sophisticated loafers as well as all-white sneakers.

FURLA: Venice was the central inspiration at Furla, as marine themes; the inlays of Venetian furniture; mythological creatures; antique tapestries, and patterns from the floors of Palazzo Fortuny and Palazzo Ducale inspired the patchwork decorations on backpacks and bags. “Irony runs through the collection,” said president Giovanna Furlanetto, who was mulling the idea of combining the men’s and women’s presentations in Milan next season. “This time, it was the first men’s event in the city and we wanted to highlight it,” she said, adding that she believed unisex designs were increasingly strong in some markets.

CHURCH’S/CAR SHOE: Owned by the Prada group, both Church’s and Car Shoe revisited two of their most distinguished designs.

Church’s re-interpreted the historic Shanghai model with a new version. With a vintage-looking calfskin and linen canvas, the new Shanghai T is embellished by two leather tassels, replacing the buckle and strap of the classic version. The design is also available in linen. Colors range from a burnt red hue and cobalt to military green and burgundy.

Car Shoe presented the new “silver driving” pebble-soled moccasins in metallic, shiny calf with contrasting white straps or calf with a deer effect revved up by a pattern of metallic flames on the upper.

FRATELLI ROSSETTI: Worn by a group of relaxed models lounging at the beach, Fratelli Rossetti’s moccasins reflected the expertise of Italian artisans, with their woven leather patterns and chevron motifs. Despite the traditional designs, the shoes exuded a modern air of ease and comfort, and came in new shades of bright red, aqua blue or acid yellow.