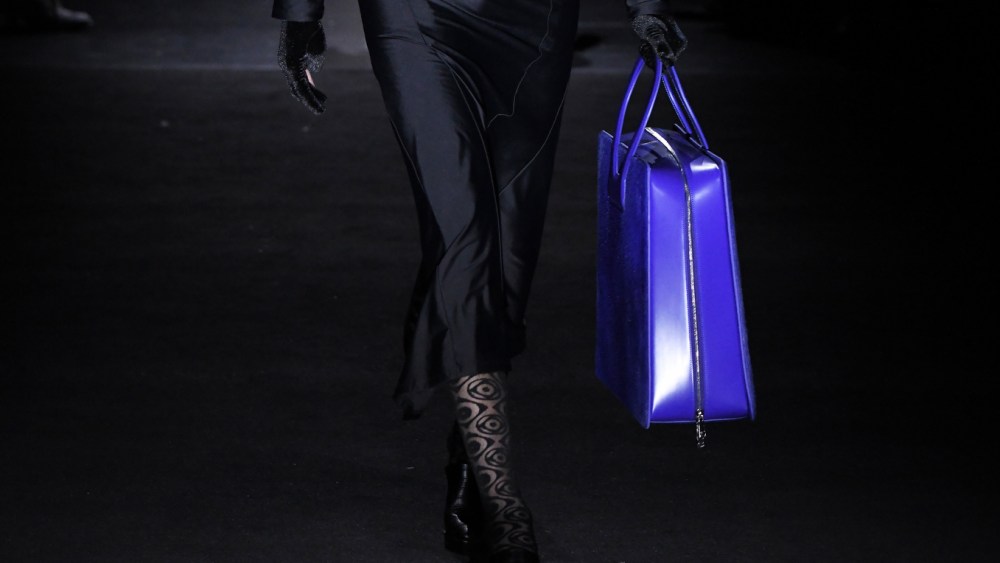 After a few years of incredibly shrunken bags, the handbag tide is turning for spring 2023, with the return of the supersized bag. Traditional styles such as totes, hobos, clutches and messengers were augmented to larger-than-life sizes, ensuring once again their leading role in this season’s fashion story.

“Raul Lopez’s Luar is within arm’s distance of the big leagues,” wrote WWD’s Misty White Sidell in her review of Luar’s spring collection — and after his recent CFDA American Accessory Designer of the Year win Lopez is now part of the big leagues for sure. In her review, Sidell contended, “The collection touched on fashion references from an ’80s and ’90s New York City, where the wealth gap was encoded into people’s wardrobe choices.”

Lopez sent out what was an amalgamation of references from his childhood — pumped-up blazers with proportions recalling ’80s Wall Street bankers; deflated black puffer coats that had been worn too many winters; an uptown primness, and simple, working-class wardrobes that surrounded him while growing up in Williamsburg, Brooklyn. This opulent maximization take on fashion translated into accessories perfectly. “His ‘Ana’ bag, which has been a success and brought new commercial life to his brand, was supersized this season as a weekender. There were new slouchy ‘Sack’ bags that could also bring in sales, plus fresh belts and eyewear,” Sidell wrote. New takes on the Ana bag come in vivid prints and bright colors.

Balenciaga’s Demna also showed an assortment of attention-grabbing oversize bags in his latest collection. A lot has happened since the mud show — but the collection is still as relevant as ever. “Demna’s ideas arrived thick and fast through the mud: meaty, oversize leather jackets, light-colored ones deliberately stained; loose jeans with the shreds on the back; velour hoodies with matching tap shorts; all the way through intricately knotted jersey gowns. The king of supersized silhouettes also tried his hand at shrunken looks, including teeny puffers, parkas and bombers. The accessories were offbeat but captivating: a leather tote bag suspended from a shoulder-length leather glove; sunglasses that really make the wearer look like an insect, and clutches resembling empty potato chip bags,” WWD’s Miles Socha said in a review.

Gabriela Hearst in her Chloé collection, inspired by nuclear fusion energy, its scientists and their campuses, reimagined leather hobo bags in oversize styles, some in bright colors and with statement hardware. “Hearst said the campus, which is the size of 60 football fields, its maze-like layout and the circular architecture of the reactor inspired her blazing yellow, orange, fuchsia, black and white color story, some rounded silhouettes, industrial hardware and blueprint patterns mixed into the designer’s formula of casual feminine dressing” WWD’s Booth Moore noted in her review of the show.