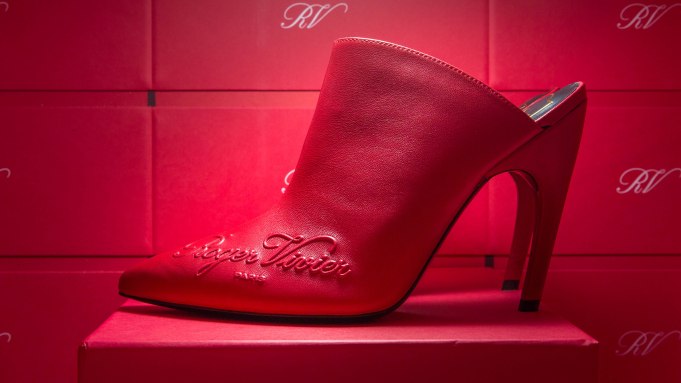 PARIS — A high octane, high-heeled show from an all-male dance troop at Brian Atwood’s ‘Paris is Burning’ event at the Hôtel de Crillon figured among the highlights in a jam-packed week of accessories presentations at Paris Fashion Week. In today’s doomsday times, the event captured a collective desire from designers to channel optimism through their collections.

Crystal embellishment, vibrant hues – yellow was a surprise hit – and luxe craftsmanship were among the directions from brands including Olgana Paris and Aquazzura. A new mule by the former brand featured removable crystal ankle ties that doubled as bracelets, while the latter’s inspirations ranged from Indian saris to the TV series “Sex and the City.”

Graphic color-blocking was another key trend, from a drag racing-themed bag capsule by Byredo to sandals at Hermès and Pierre Hardy.

Channeling good vibrations were the statement jewelry pieces at Eddie Borgo, Jennifer Fisher and Delfina Delettrez, and in the footwear category, rainbow heels at Alexandre Birman, charming pompom and tie-dye details at Brian Atwood and a vibrant graffiti story at Christian Louboutin.

Newer labels to look out for include Alchimia di Ballin for its graphic striped track-pant boots, Neous for its strong palette and architectural silhouettes and the signature line of Fabrizio Viti, the man behind the footwear at Louis Vuitton. His unexpected material combinations and vintage-inflected shapes offer a thoroughly modern mix.

Scroll through the gallery for more…