EXCLUSIVE: Adriana Lima on Her Eyewear Line and Her Desire to Launch Lingerie

The Brazilian model has created a collection with Privé Revaux, the affordable eyewear brand.

Adriana Lima wears one of the styles from her new sunglass capsule.

The term “supermodel” gets tossed around a lot in the fashion industry. But in the case of Adriana Lima, it hits the mark.

The Brazilian-born beauty, who started her career at age 15 by winning the Ford Supermodel of Brazil contest, is consistently ranked as one of the world’s highest-paid models. Perhaps best known for her role as the longest-running Victoria’s Secret Angel, Lima has walked the runways for nearly every major fashion brand and is also an ambassador for Puma, IWC and Chopard. Just this month, she was one of four women to be featured in the new Max Mara campaign (along with Joan Smalls, Irina Shayk and Gigi Hadid) and she’s currently on the cover of Vogue Japan.

But if that isn’t enough, on Feb. 14, Lima will unveil a capsule collection of sunglasses — that she designed with help from her 7- and 10-year-old daughters — with Privé Revaux, the affordable eyewear company.

Privé Revaux was founded in 2017 by David Schottenstein along with celebrities Hailee Steinfeld, Jamie Foxx and Ashley Benson. The company, whose eyewear styles retail starting at $29.95, received an undisclosed investment from private equity firm TSG Consumer Partners in 2018. It has also created collections with Benson as well as Riverdale actress Madelaine Petsch and actress and singer Dove Cameron.

In a visit to WWD, Lima said that she’d actually been a fan of the brand before she was approached about designing Adriana Lima x Privé Revaux line.

“It’s amazing how we connect the dots,” she said. “I was walking in Miami about three years ago in the Aventura Mall and there was a kiosk of sunglasses in the middle. It caught my attention because of the styles: they looked beautiful, fashionable and expensive. So I stopped and started trying them on.” When she found out the price, she was shocked and immediately bought a few pairs. “It’s super affordable for what it looks like, from the styles to the packaging,” she said. “When I like a pair of sunglasses, I usually buy three of the same style because I lose them all the time and I wanted to buy something affordable and with great quality and that’s what I found with Privé Revaux.”

Fast forward a few years and she was introduced to Schottenstein who broached the idea of creating her own line. “I said I would love to be part of it and, by the way, I’ve already been wearing your sunglasses.”

The result is an assortment of four limited-edition frames in both anti-blue light optical and sunglass styles. “I chose shapes I think will look good on everyone. I always like oversize glasses and then I also got inspired by the movie ‘Atomic Blonde.’ I said, ‘Look at those sunglasses.’ And this was way before I knew I was going to design for them. That was the starting point. Then my kids came in and helped me with the colors.”

The names of the styles are also highly personal with Love Valentina and Love Sienna named for her daughters and The Julia named after her grandmother. The fourth is called The Panther. All four retail for $39.95 and will be sold on the brand’s web site and at Kohl’s.

Although it took a year to complete the project, it was easy since ironically Schottenstein and she are neighbors in Miami. “We live two minutes from each other. We had no idea. So it made it easy for us to meet and I would go to his family house with my kids and that’s how we created it,” she said.

“We are excited to welcome Adriana to the Privé Revaux team,” said Schottenstein. “Adriana’s designs are fresh, fun and heartfelt, just like her style.” She will appear in the campaign for the collection which was shot in Miami with Rob Zangardi and Mariel Haenn as creative directors. 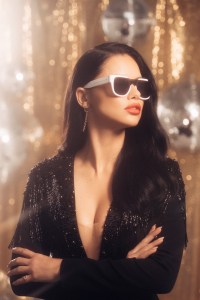 A campaign image for the capsule collection.

Now that she can also add designer to her résumé — she has a boxing-inspired performance collection with Puma — will Lima ever consider launching her own apparel line?

“Why not,” she said. But there are other priorities on top of her list. “Two things I’m focusing on now are lingerie — I would like to do my own collection — and skin care. And maybe from there we go to apparel and shoes or jewelry,” she said.

But more immediately, she’s got another couple of things on her to-do list. On the run-up to Super Bowl Sunday in Miami, Lima will be hosting a party with Pepsi as part of its Neon Beach takeover. And she’s looking forward to the big game.

“I will be at the Super Bowl.,” she said. “I’m excited — 49ers all the way! — and I’m hosting a party for Pepsi on Super Bowl weekend. I love the game and everything about it. I’ve been blessed to be able to be present during the ceremonies. There’s such a crazy energy with the fans when the players walk out, each one has his own move, and the military flights overhead, it’s incredible. And I’m excited that J.Lo and Shakira are going to be singing at halftime. I feel that J.Lo this year is really taking over.”

She’s also hoping to be involved in New York Fashion Week the following week. “I’ll be there. I don’t have anything booked yet but most likely I will,” she said. 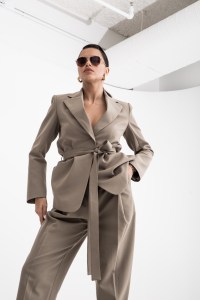 Now 38, Lima is similarly excited about how the modeling industry is changing to become more inclusive.

“The world is changing — not only the fashion industry but movies, too. Slowly, but it is changing and I cannot be more happy. As a Latina, I struggle myself. It’s not easy for a Latina to enter the fashion industry, but I’ve been modeling for 20 years. I’m also 38 years old and to still be able to do a campaign — I just came out with a Max Mara campaign now and I’m on the cover of Vogue Japan. I would never have thought as a mature woman, I could still be in the business. So I’m happy that the world is embracing women in their different stages. I hope this evolution continues.”

In order to stay in shape, Lima said she embraces exercising and tries to eat right — but not always. “I think it’s a matter of balance,” she said. “I like to work out but I also like to eat everything. I cheat and indulge myself, not every day, but I do it. For the holidays, I was in Brazil for two weeks and I didn’t work out for one day and ate everything that my mom cooked. It was heaven. So it’s a balance. You’ve got to live and you’ve got to make yourself happy.”

What makes Lima happy these days is spending time with her daughters and just relaxing with her friends.

“I spend a lot of time with my kids: we go to the park, the beach, I take them to soccer, ballet,” she said. “And I like to hang out with my friends — simple things. I don’t care where we are. I just like to sit with them and have a tea or a drink and just spend time. I read, go to the movies.”

But in a perfect world, when she’s not launching eyewear or hosting Super Bowl parties, there are a couple of other things on her bucket list. “There are things I wish I could do if I have extra time: I wish I could learn piano and really focus. I like to focus on everything that I do. I wish I could do yoga every day. This is not realistic, but I wish I could just take my kids and go everywhere in the world so I can teach them culture by experiencing things. But that’s in my dream land.”