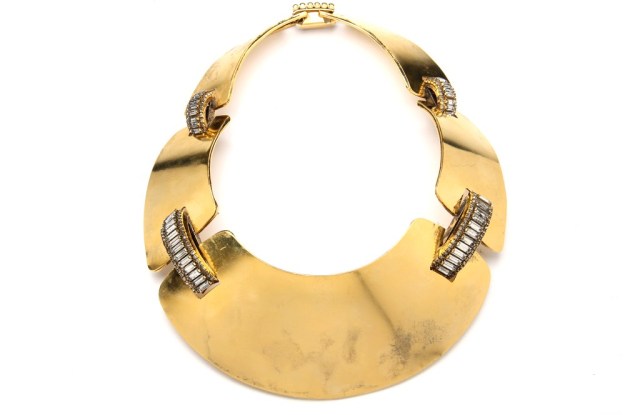 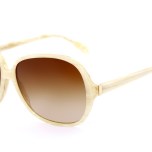 Lauder, who unveiled a footwear collaboration with Jimlar Corp. in September, teamed with Erickson Beamon on Aerin Erickson Beamon — a collection of about 50 pieces of jewelry, from statement cocktail rings, chain-link bracelets and necklaces and collars — and Oliver Peoples on a pair of sunglasses, which will hit retailers early next year.

“Accessories are a key part to the brand and to the Aerin consumer’s world. It very much embodies style, luxury, dreams, and it’s just kind of that finishing touch — the way lipstick is. It’s about the necklace, the sunglasses and the shoes,” Lauder, creative director of Aerin, told WWD.

Lauder recalled a gold collar necklace her grandmother Estée Lauder gave her that she used as an inspiration that gives the collection “that element of heritage,” but she cited the use of items such as oversize wooden heart pendants as giving the $150 to $1,000 line a “modern luxury” feel. Natural elements like varying shades of wood, shells or flower motifs are present throughout the nearly 60-piece line, mixed with 22-karat-gold-plated vermeil, turquoise and coral. Lauder used her own travels as a basis for her work, including trips to the Amalfi Coast, the beaches of Southern Italy, the Greek isle Patmos, the French Riviera, Nantucket and New England.

Karen Erickson, who co-founded Erickson Beamon with Vicki Beamon almost 30 years ago, said that Estée Lauder’s archives played a pivotal role in the creation of the collection since the elder Lauder had a vast collection of fine and fashion jewelry. Some of that jewelry is being sold at Sotheby’s on Dec. 5 to raise funds for the Breast Cancer Research Foundation founded by the late Evelyn Lauder.

“When I design, it’s almost like channeling. I swear it’s a channeling process; I go into a state, and I know what to make. The way it worked was I really put my mind-set and merged with the personality of what I was trying to accomplish,” Beamon said, adding that although the pieces have a distinct Erickson Beamon feel to them, each one is “unique and individually Aerin.”

The first Aerin Erickson Beamon collection was conceived as a licensing agreement. Future collections will only bear the Aerin name, falling under her main lifestyle brand.

Of the sunglasses, Oliver Peoples for Aerin, Lauder was keen to develop a shape that was versatile. The oversize square silhouette, which will retail for $340, comes in shades of tortoise like moss green, off white and light pink. They will be carried at Neiman Marcus, Bergdorf Goodman, freestanding Oliver Peoples boutiques and aerin.com.

“The idea is the accessories, home and beauty are the three pillars of the Aerin brand,” Lauder said of the rapid introduction of new categories within her burgeoning company.