B. Robinson CEO on Revo Acquisition and Expansion Plans

The company is increasing Revo's distribution and marketing spend to take the cult sunglasses brand to $100 million in sales.

B. Robinson has big plans for Revo. The 90-plus-year-old company acquired Revo from Sequential Brands in 2018 with a team of private investors and created Revo Holdings in an attempt to take the cultish sunglass brand from obscurity to a $100 million business.

Toward that end, the eyewear brand launched a new web site, is leaning on its heritage, collaborations and increased marketing spend to raise its profile, and is increasing distribution through brick-and-mortar and digital channels. Instead of targeting a broad or specific age demographic, the sunglass brand is focusing on the consumer “who wants the best out of their equipment.”

“Revo is a community and not a commodity,” said Cliff Robinson, chief executive officer of B. Robinson and Revo. “People want to tell their stories about Revo even to the point of people telling the story of how they lost their Revo sunglasses.”

Founded by NASA astrophysicist and optical engineer Dr. Mitch Ruda in 1985, Revo is crafted with lenses engineered by NASA technology. The brand is carried in some 5,000 stores around the world and hopes to reach new customers at more than 100 golf shops, where it sells its golf collection that launched in 2018, as well as through independent optics and department stores, corporate events and amenity programs, global events, pop-up shops and travel retailers.

Robinson saw Revo as an attractive opportunity because of its heritage, increased demand for American heritage brands from the Eighties and Nineties, and the lack of what he believes are “great, clean American sunglass brands in the marketplace today.” 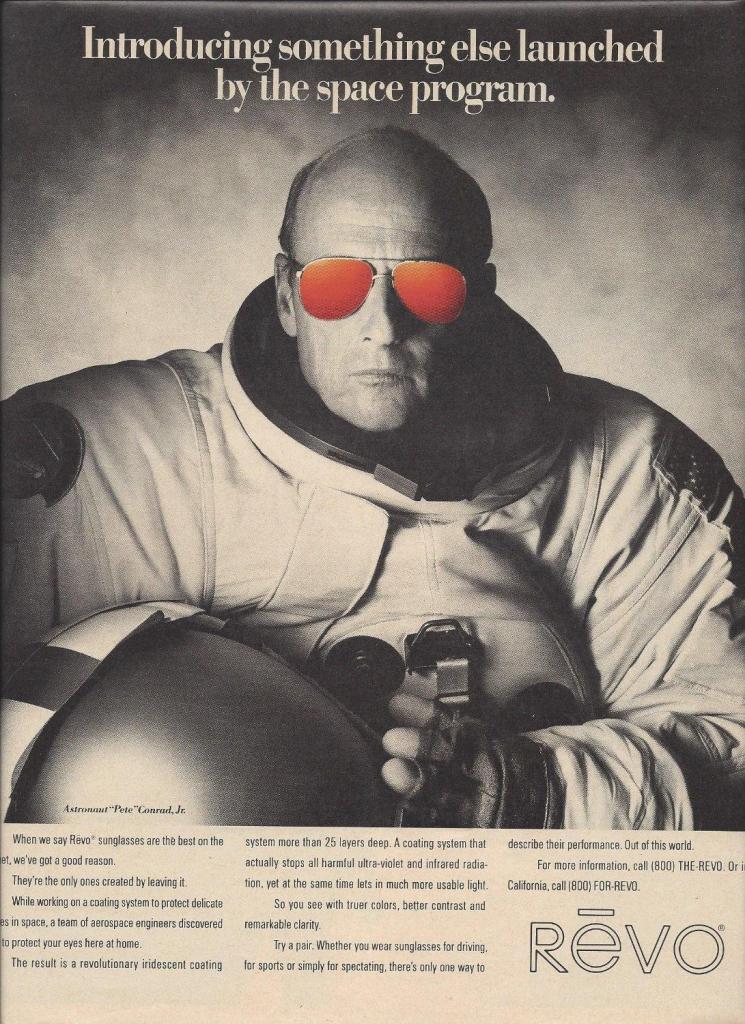 “So much is here and gone three seconds later. Heritage is something real and tactile; it stands the test of time,” he said. “People want to have an experience, they want to feel something and not just a fleeting moment.”

Revo looked to its roots for last week’s launch of its first luxury sunglass frame, Moonwalker Zero G, intended to commemorate the 50th anniversary of the Apollo moon landing. The likeness of Pete Conrad, astronaut and former Revo brand ambassador, was used to promote the style.

Revo isn’t staying in the past and is focusing on collaborations as well. “Collaborations are an important part of our way forward,” Robinson said. The brand on June 1 launched a vintage-inspired frame with Forty Five Ten and a more modern style in January with adventurer and television presenter Bear Grylls.

Robinson said, “If it’s good enough for Bear, it’ll be good enough for everyone else. If he’s out doing his treks and filming, he needs the best of the best for his performance.” He also shared that more collaborations are on the way.

The Revo license made the rounds over the years and was owned by Luxottica and Oakley before Sequential Brands. B. Robinson took over Revo’s manufacturing and distribution in 2014 before the purchase last year.