Made in Italy: Eyewear

The district of Belluno, in Veneto, represents the core of Italy’s eyewear production with giants such as Luxottica, Safilo, De Rigo and Marcolin. 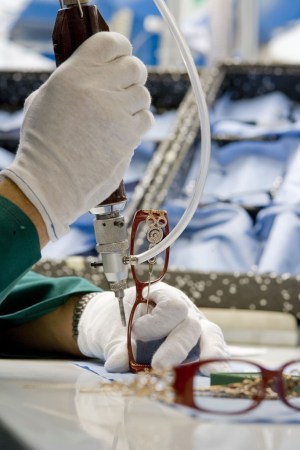 The district of Belluno, in Veneto, represents the core of Italy’s eyewear production with its 12,000 workers and housing giants such as Luxottica, Safilo, De Rigo and Marcolin. The district comprises two relevant areas for this industry: Cadore, with almost 50 percent of the eyewear factories, and Agordino, where Luxottica is based.

The first eyewear laboratories emerged during World War II, assembling components for styles that were made in Germany. After the war, they started to produce frames, lenses and cases, raising the bar on technology and gradually specializing in the sector.

During the Seventies and Eighties, growing local and international markets contributed to the rapid increase in the number of factories, which had grown to 745 in 1991 from 137 in 1971. The upward trajectory came to a halt in the Nineties and the Aughts as the region’s leading companies emerged and the number of other plants was halved.

By 2008, the Belluno district was producing 82 million pieces, of which sunglasses totaled 53 million, many licensed to luxury fashion brands. Exports accounted for almost 80 percent.

A group of small labs, specializing in specific phases of production, continues to play a significant role today.

In the first half of 2012,  Italy’s eyewear market showed a 5.6 percent increase in exports compared with the same period in the previous year, boosted by sales in the U.S. and emerging markets including Brazil, China, the United Arab Emirates and Korea.

Italy, however, remains a sore spot as the country is not showing any sign of economic recovery. The nation experienced an 8 percent drop in eyewear sales in the first half of 2012, compared with the same period the previous year.

According to the Milan Chamber of Commerce, at the end of 2012, the Italian eyewear industry counted 738 factories, mainly positioned in the northeastern region of Veneto, which listed 388 firms and 16,150 workers. This represents 52.6 percent of all the sector’s business in Italy, followed by Lombardy (11 percent) and Emilia Romagna (5 percent).