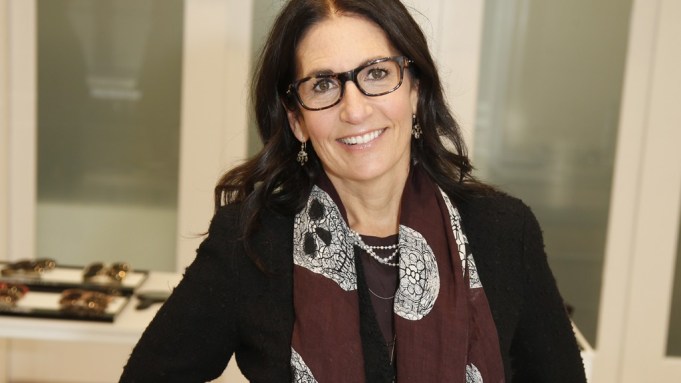 Bobbi Brown is trying her hand at eyewear.

Divided by skin tone as opposed to shape, each frame is meant to pair with the consumer’s complexion, a concept that is beauty-centric and will be the centerpiece of Brown’s collection when it hits stores in February.

“It’s classic with style,” Brown said. “When I started the process, I didn’t know anything about how to do this. I knew what I wanted and I certainly knew what I didn’t want.”

Brown, who serves as the creative officer of Bobbi Brown Cosmetics, owned by the Estée Lauder Cos. Inc., inked a deal with Safilo Group for eyewear. The agreement is between Bobbi Brown, the individual, and not with Lauder, which, according to Brown will only enrich her brand.

“I have been a very good partner to Estée Lauder for over 18 years, and they believe in me and trust me. I work really well with them,” she said. “They know it is really important for me to create outside of makeup and they gave me the permission to do this with the understanding that it will not affect, only enhance the quality of the Bobbi makeup and the awareness. I understand they want to make sure it’s the same quality and the same strategy as the Bobbi makeup.”

According to Brown, who has been working on the project for 18 months, the partnership with Safilo was immediately a “natural fit,” in part because the eyewear firm chose a “beauty and lifestyle expert” with knowledge of face shapes and skin tones rather than a “fashion designer,” which “is what the industry does.”

Shapes for the collection will include cat-eye and retro, wayfarer and oversize, large and small aviators and oversize rectangular frames. The color palette, which is central to the line, will include nude and blush tones that are meant to “brighten the face,” neutral colors that “complement the skin tone” for a “bare look,” “tonal” colors that “balance” skin tone with a “soft contrast,” and “contrasting colors,” meant to “strengthen and heighten the face and lips,” according to Safilo.

Frames are divided to correlate to face shapes, which include round, heart-shaped, square and oval. The collection will be displayed in department stores and Solstice boutiques by color palette, meaning a salesperson will first determine a consumer’s coloring, then face shape in order to find the most flattering style.

When working on the line with Safilo, Brown said she wanted to create a collection that was “an extension of the face” and would appeal to customers of all ages with varying budgets.

Brown said in spring she would launch a high-end collection made in Italy that includes sterling silver. The main collection that makes its debut in February is made in China, and will be marketed via an advertising campaign featuring “real girls” Brown felt represented her brand.

With a cosmetics line, an impending book launch, various media appearances and now an eyewear line, Brown appears rather calm for all the projects she is juggling.

“I’m not very good balancing my checkbook, but I’m very good at budgeting my time. I have complete ADD, but I’m also OCD so it balances itself out,” she said, laughing as she caught the eye of her publicist, who stood nearby.

“It’s self-diagnosed,” Brown and the publicist said loudly in tandem. “I’m not taking any medication, I do do yoga and I have three children and a foreign exchange student,” Brown said.