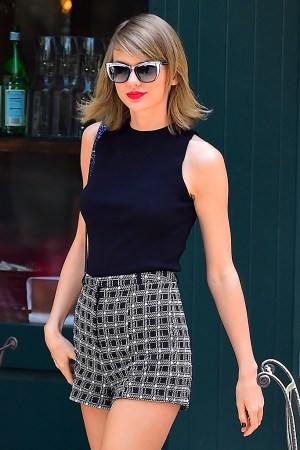 Last week, Gwen Stefani signed a multiyear licensing deal with Tura Inc. to create eyewear for her L.A.M.B. and GX by Gwen Stefani brands. The deal marks Stefani’s first foray into the category, but she’s hardly the first celebrity to show off an affection for shades. WWD asked executives from top eyewear brands about their favorite celeb plug.

Patricia Arquette in Versace: “Patricia’s impassioned speech about gender equality at the Oscars garnered so much buzz, but I also loved that she was unapologetic about wearing eyeglasses during her big moment.” — Holly Rush, president of wholesale North America, Luxottica

George Clooney in Persol: “There was so much attention on Amal and what she wore during the wedding and throughout the weekend — and rightfully so — but it was George’s Persol sunglasses that became [a signature] accessory.” — Holly Rush, president of wholesale North America, Luxottica

Taylor Swift in Swarovski:  “The glasses are characterized by the extremely elegant design of Swarovski style…with its generous cat-eye silhouette. The spirit of the brand is evoked with a crystalline fabric on part of the frame…[which is matched to] Taylor Swift’s feminine style.” — Giovanni Zoppas, chief executive officer, Marcolin

Jamie Dornan in Calvin Klein Collection: “Contemporary culture can sometimes reinforce a brand and a specific product category. The popularity of “Fifty Shades of Grey,” from both the book and the movie, made the cast newsworthy.” — Mark Ginsberg, senior vice president, global marketing, Marchon Eyewear

Robert Downey Jr. in Oliver Peoples at the Oscars: “RDJ is impeccably styled in this photo, and his eyewear is an important part of the whole look. The custom-colored blue wash lenses complement his bow tie, and accentuate his eyes instead of hiding them. The Sheldrake is a quintessential Oliver Peoples frame.” — Lise Tyler, design director, Oliver Peoples

Kendall Jenner in Fendi: “Celebrities and models are wearing eyeglasses more as the newest fashion-forward designs have increasingly made wearing glasses ‘cooler.’ Some of the most in-demand models of the moment will be bringing a lot of attention to eyewear category in  upcoming seasons.” – Nicola Bonaventura, artistic director, Safilo Group

Beyoncé in Ray-Ban: “Beyond the comments and likes on Instagram, Beyoncé’s post generated major outfit inspiration with consumers and suddenly we were inundated with requests about the Ray-Ban Clubmaster in wood.”  — Holly Rush, president of wholesale North America, Luxottica

Keira Knightley in Salvatore Ferragamo: “Entertainment media is one of the top-performing categories [to generate attention for a style]. An Oscar nomination can thrust an actress and a brand into the spotlight.” — Mark Ginsberg, senior vice president, global marketing, Marchon Eyewear