A licensing agreement with BMW Group is the latest addition to the Italian eyewear company's portfolio.

MILAN — Marcolin Group is forging ahead with a product-driven strategy in an eyewear industry rife with changes, as it today reveals a five-year licensing agreement with BMW Group.

In the past 16 to 18 months, the Longarone, Italy-based Marcolin has inked deals with seven brands ranging from Bally, Adidas, Sportmax, Max & Co. and Los Angeles-based brand Barton Perreira, diving into the specialty eyewear market, to, most recently, Swatch Group Ltd. for the production and distribution of the eyewear collections of watch labels Longines and Omega.

The license with BMW Group points to the eyewear specialist’s expanded brand diversification. The agreement is for sunglasses and optical frames under the BMW, BMW M and BMW M Motorsport labels and is effective from Jan. 1. The collections will be marked by a strong design and color-blocking combos, and will be available through Marcolin’s distribution network and in the travel retail channel.

In an interview at the company’s offices here, Marcolin chief executive officer Massimo Renon characterized BMW as “luxury and one of the most powerful leaders” in the automotive and motorcycle industry with “a strong influence in fashion.” He explained that the license will also help Marcolin further penetrate the Asian market. “BMW is one of the strongest automotive brands in China,” Renon noted. At the same time, the agreements with BMW and Swatch point to an exploration of segments and brands that are not specifically tied to fashion. 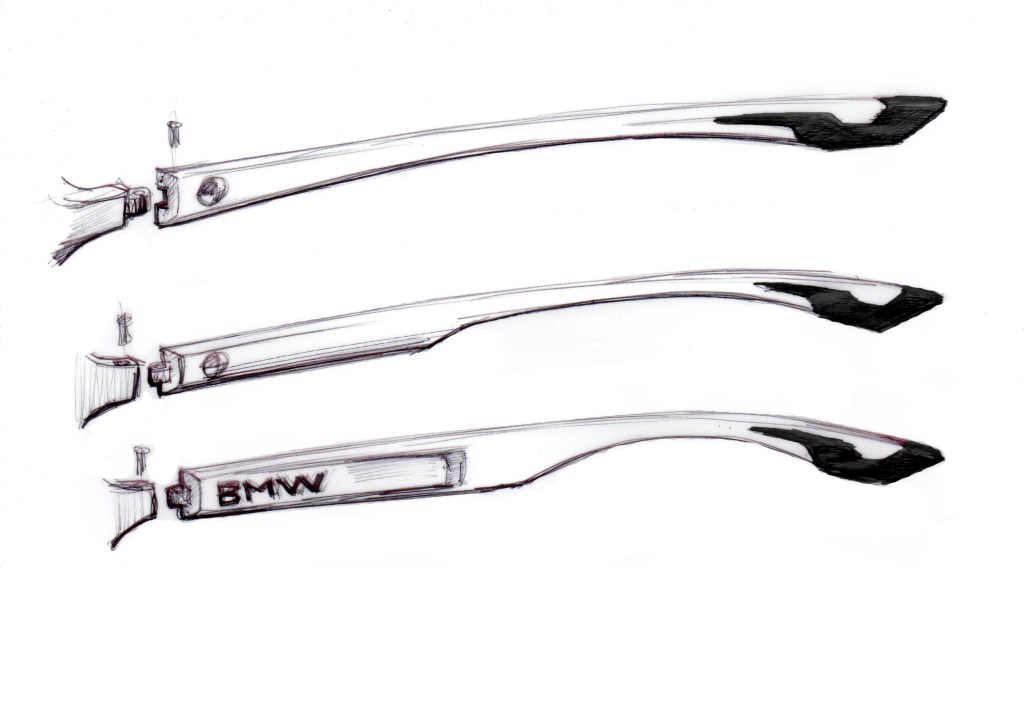 Sketches of the temples of BMW’s eyewear by Marcolin.  courtesy image

“Our vision is to build a complementary portfolio that is not only fashion and apparel,” explained Renon, citing the “three sports and lifestyle colossus” of BMW, Adidas and Swatch Group as examples. 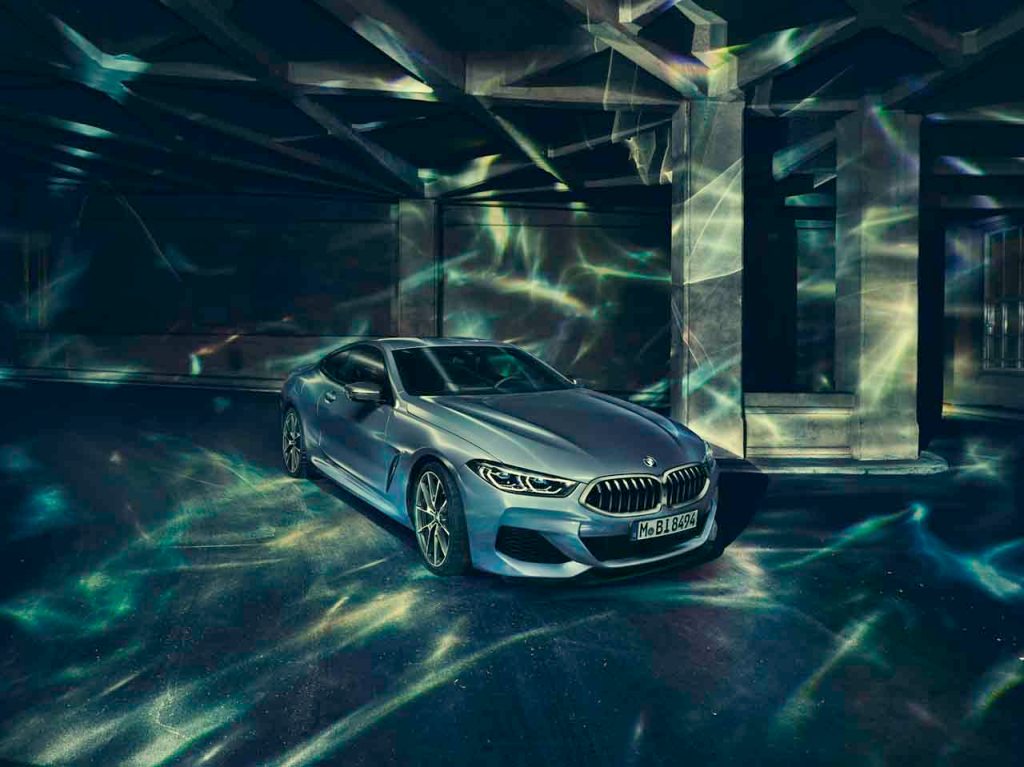 Marcolin’s portfolio of labels comprises around 30 brands, ranging from Tom Ford, Moncler and Ermenegildo Zegna to Tod’s, Swarovski, Guess and Diesel, to name a few.

The group is rationalizing its stable of brands, however, to focus on those that bring more visibility and profitability and have more growth potential. After a moment of “euphoria [to sign] as many licenses as possible in the 1980s and 1990s, companies began investing on their own brands,” said Renon, ticking off Luxottica-owned Ray-Ban or Safilo Group’s Carrera and Polaroid as examples, which was then followed by a reshuffling of the system. This led to Kering internalizing its eyewear production, Luxottica merging with Essilor, Marcolin and LVMH Moët Hennessy Louis Vuitton creating a joint venture called Thélios, which all shook up an industry that had been consolidated and set in its ways for decades.

“I don’t think the scenario in five years will be the same,” said Renon, pointing to what he believes will be further consolidation and competition between giants.

Renon has extensive experience in the sector. He joined Marcolin in January 2017 as worldwide commercial general manager, a newly created position, from Kering Eyewear. In October that year, he succeeded Giovanni Zoppas to helm Marcolin as the latter became ceo of Thélios.

Prior to Marcolin, Renon was Safilo’s head of business for the Europe, Middle East and Africa region. While he also counts a stint at the Ferrari team in Italy’s Maranello, Renon developed his career at Luxottica, which he joined in 2000 and left after a decade, rising to the role of director of the New Europe Region, after being responsible for Belgium, Turkey and North Europe.

Renon is leveraging Marcolin’s ability to form solid partnerships, which he indicated are based on the quality of the product. “This is the only driver that any consumer focuses on when spending 300 euros or more on glasses today. In the past, the brand was more central, followed by trends, but now the product is core,” he observed.

The ceo contended that Marcolin always differentiated itself by a specific expertise — “translating the personality, the stylistic features, the codes and values of a brand into the product.” Case in point, he said, is the license with Tom Ford, which has been running from 2004 and has been extended to 2029, which he characterized “among the longest, if not the longest in the industry and proof that we have succeeded in gaining the designer’s trust.”

Over the past two years, the Italian eyewear group has hired 250 people in Italy and globally, partially thanks to the opening of four joint ventures in Mexico, the Middle East, China and Russia, and the entrance into two new direct markets in Singapore and Hong Kong — a sign of a focus on the Asia Pacific region.

To ensure a future for the eyewear district and the sector, Marcolin has also invested on training. “This is the real issue in our segment — the scarcity of new qualified and skilled artisans, as an entire generation of technicians is retiring now. Not enough funds are invested in training and our district is in a valley enclosed by the Alps,” said Renon.

Longarone is a town on the banks of the Piave river in the province of Belluno, in northeast Italy, and a key eyewear manufacturing hub.

To this end, Marcolin has adhered to the international eyewear polytechnic set up by Certottica, the institute that analyzes products and manufacturing processes in compliance with European regulations and international technical standards, to guarantee technical training. It is also among the companies that support the project of the Luiss Business School.

Renon said that aging and the excessive use of technology, from smartphones to computers, are accelerating the need for prescription glasses and boosting this market segment — hence Marcolin’s investments in this category, too.

“Sunglasses are seasonal and linked to fashion and trends, and more subjected to fluctuations,” he contended.

Training also includes improving the level of service in stores, which must be in line with the price of the goods, as well as the shopping experience, although Marcolin does not have its own stores.

While licenses are a focus, Marcolin has been exploring other ways to grow, for example through the acquisition of Viva International in 2013, the North American eyewear company that produces and distributes the frames of a number of brands, including Guess, Harley-Davidson and Skechers. This allowed Marcolin to expand its luxury portfolio with strong diffusion labels and increase sales of optical frames. The acquisition helped double Marcolin’s sales, said Renon, and improved margins. Of course, he also touted the partnership with LVMH, citing its “extraordinary experience and skills.”

LVMH has a 10 percent stake in Marcolin. PAI Partners holds the majority, with a 72 percent stake, while the remaining shares are owned by a pool of investors, including the Marcolin family. “We are greatly supported by PAI, which has a long-term vision and whose goal is to create value and to make Marcolin stronger, more structured and more modern, without only focusing on financial gains,” said Renon.

PAI bought Marcolin in 2012 from a number of investors that included the Marcolin family and brothers Diego and Andrea Della Valle, and delisted the company. “The goal now is to enrich the company, there is no talk of an IPO,” said Renon, asked about a potential return to the stock market.

Marcolin has almost 2,000 employees and last year sold 14.6 million glasses, produced in Italy through Marcolin’s own plants and third-parties in the Veneto region. “Our production capacity is below customers’ request, so we are exploring a potential expansion of our in-house manufacturing, but we also believe in keeping the district alive and support the small producers in the area,” said Renon.

A portion of the products is also made in Japan and China for brands such as Guess, Timberland, Gant and Adidas.

In 2018, sales totaled 482.2 million euros. Adjusted earnings before interest, taxes, depreciation and amortization totaled 57.2 million euros. Renon expects single-digit growth in 2019 revenues. At a comparable level, not taking into account the exit of Balenciaga and Montblanc, which decamped to Kering Eyewear, sales this year would have risen at a high single-digit clip, he added.

North America represents 45 percent of Marcolin’s business, followed by Europe, which accounts for 30 percent of revenues (in particular France and Italy). The rest of the world represents 25 percent of sales.

Marcolin has been investing in technology, improving lead time to market, social media, digital marketing, B2B tools, while paying attention to sustainability, working with Positive Luxury, which “connects luxury brands and people who care about the future through the unique Butterfly Mark,” said Renon. The mark “is a symbol of trust earned by brands that have adopted sustainability as a business strategy.” The company, founded in 2011, will host its first Positive Luxury Awards in February and Marcolin will sponsor the Innovation of the Year Award, which recognizes a brand that has revolutionized sustainability in the luxury market through an entirely new approach, improving its social and environmental performance in the process.

Consumers are more and more interested in traceability and respecting the territory, said the executive. “We believe all this brings added value and that we can be more attractive, representing a solid, ethical and social alternative.”