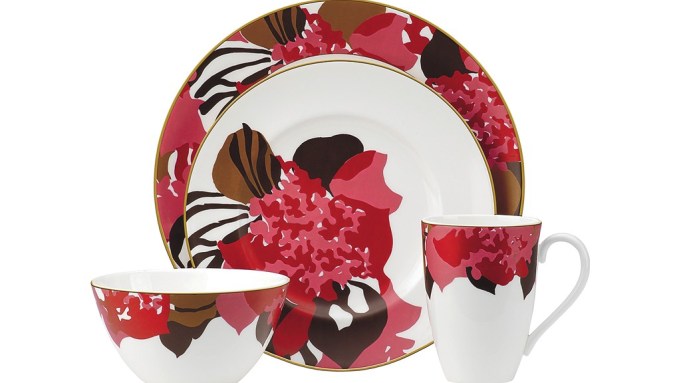 With its quirky, colorful and whimsical products, Kate Spade has successfully extended its brand through key licensing partners, such as Safilo for eyewear, Schwartz & Benjamin for footwear and Lenox for tabletop.

The full array of licensed products, which ranges from stationery and comforters to footwear and sunglasses, takes its design cues from Kate Spade New York. Many have become leaders in their respective categories, and each makes significant contributions to expanding the Kate Spade lifestyle.

Defining elements of the collection are the hardware, jewels and bow studs. “We like ornamentation. We like multicolor material. It relates to some of the ready-to-wear, which has more flavor and color to it. We try to bring that into shoes,” said Barbara Schwartz, director of product development at the footwear maker.

The shoes, which are priced in the “accessible luxury” range, are primarily manufactured in Italy. The company recently began selling to stores in Great Britain and expects to start shortly in Germany and France. It also has a distribution partner in Asia, where it sells its footwear in Japan, Thailand, South Korea, Mainland China, the Philippines, Hong Kong and Indonesia. The executives said the way it usually works is that Kate Spade leads the way into a new country and the footwear follows.

Schwartz noted that the casual side of the business — espadrilles, sneakers, moccasins and ballet slippers — is growing nicely, and the company will also be making footwear for Kate Spade Saturday — a younger, more casual offering.

“Deborah [Lloyd, president and chief creative director of Kate Spade] is very passionate about the footwear business,” said Schwartz. Lloyd has a shoe designer who works for Kate Spade and collaborates with Schwartz & Benjamin, sharing ideas and inspiration. “We have a great collaboration [with Deborah] since she stepped into Kate’s shoes. She really embraced it, probably even in a bigger way than Kate did at the time. Maybe it’s her background and wanting to reach a broad audience and marketplace. She’s able to embrace a lot of the different looks. She’s very open and there’s great communication.”

Kate Spade New York executives come to the Schwartz & Benjamin showroom four times a year to stage the collection for buyers with additional Kate Spade products, adding ambience and music to the showroom, said Schwartz, so people “walk into the world of Kate Spade.”

Schwartz said she typically visits the Kate Spade New York showroom to see handbags, hardware and jewelry development, and Spade executives look at what Schwartz & Benjamin has developed. “It’s a great sharing of ideas,” she said.

Kate Spade footwear is sold in stores such as Nordstrom, Bloomingdale’s, Saks Fifth Avenue and Neiman Marcus, as well as on Amazon.com, Zappos.com and Piperlime.com.

Expanding beyond products to wear, Kate Spade has an extensive array of home goods. Lenox has been a licensee for tabletop for more than 10 years.

“Kate Spade is a wonderful brand,” said Lou Scala, senior vice president of marketing at Lenox. “The reason it works so well is it’s a nice complementary brand to what we stand for. We stand for traditional brands, and Kate has a design sense that goes after a traditional design aesthetic, but with a twist that makes it younger and more approachable.”

“Kate Spade by Lenox is the number-one designer license in the entire industry,” said Scala. He said the line is broad and includes every tabletop category, from brightly colored mugs, vases and flatware to silver frames, glass bottle stoppers, china, giftware, Christmas ornaments and key gift items. The merchandise is sold at Macy’s, Bloomingdale’s and Nordstrom, among others.

According to Scala, the Kate Spade by Lenox brand can capture that younger woman who first became familiar with the brand as a teenager and is now attracted to it for her engagement, wedding, birth of her child, anniversary or dinner parties. He explained the Kate Spade design team is very open to listening to Lenox about certain design nuances (for example, don’t use color in the middle of a dinner plate — people prefer their food on a white background) and they have “good chemistry together.”

Eyewear is another category that’s become a significant business for Kate Spade.

Roberto Vedovotto, ceo of Safilo Group, said the company has been very successful in terms of sales growth and market share with Kate Spade New York optical and sunwear collections.“Safilo has been working in collaboration with the brand for more than a decade, and it is their deep passion of design, combined with a respect and understanding of our industry and its unique needs, that has allowed the eyewear collections to flourish,” said Vedovotto. “Most of our customers don’t shop the collection for basics, they look to the brand for something special. As such, we always want to offer them something interesting and unique, be it exclusive acetate colors or playful patterns. This is also one of the few women’s fashion sunglass brands that offers polarized lenses and products dedicated to smaller face shapes.”

Vedovotto described the customer as a woman from 25 to 55: “She is witty, curious, playful and strong and not afraid to stand out in a crowd. The collection is vibrant and quirky, so it attracts women who have their own unique sense of style.”

He said Lloyd and her team have been great partners.

“The stylistic influence and creative direction they provide to our product development team each season enables us to consistently design and deliver styles with strong consumer appeal. The brand is always developing creative new ideas and providing us with inspiration. Essentially, we take their vision and translate it into beautiful, wearable eyewear with a strong point of view,” he said.

What distinguishes Kate Spade’s eyewear and sunglasses from other designer lines is that they’re the “go-to brand in the industry for petite face shapes,” and their playful use of customized colors and interesting patterns on trend-right styles, he said. In addition, he said, the offerings are balanced with a wide range of wearable silhouettes, which makes the line very versatile.

When asked whether the Kate Spade Eyewear has the potential to penetrate the European and Asian markets, he said, “We launched the optical and sun collections in Brazil and Asia in 2012 with positive results, and we are enthusiastic about continuing to expand the brand internationally in the coming years.”

Kate Spade Eyewear is situated in the top five performing collections within Safilo’s U.S. brand portfolio with excellent growth and prospects, he said, adding that the brand has performed well in all its distribution channels.

As for other categories the brand would consider adding, Craig Leavitt, ceo of Kate Spade, said, “We’ve got a million ideas. There’s nothing in the immediate future. We’re focusing on what we’re doing now.” Still, some categories that are ripe to explore are lingerie, loungewear and children’s apparel — especially after Sasha Obama wore a Kate Spade coat and dress during the inauguration last month.

“We have customers asking about those things,” said Leavitt. “We’ve done collaborations on swimwear, but that’s an opportunity for us to do a complete line. These are all things we’re thinking about for the future to help us round out a lifestyle.”