The line will hit stores in February and reflects the soccer champion's style and details-oriented approach.

A DB Eyewear by David Beckham design produced by Safilo.

Wearing a discreet brown bomber jacket over a white shirt and pants in a lighter brown, by his own admission, Beckham’s style has evolved into a “more classic, very British” one, after “having tried daring clothes, glasses and hair over the years.” This look is reflected in the DB Eyewear by David Beckham line, which is understated, sleek and elegant. The soccer champion convinced the Safilo team to avoid spelling out his name on the glasses, so that the logo consists of his initials discreetly lasered on the lens and positioned as a detail internally on the arms. What is called the “talisman,” a metal detail originally inspired by the wings of a bird, and “a symbol of power, protection and freedom” is another unique sign. The wings evolved into an angular shape that marks the collection, and is designed to be visible on the front and the arms.

“I am a details-oriented person, to the point that I can get annoying, and we worked on the talisman to get it perfect and distinctive, it’s important because it helps make the collection stand out,” explained Beckham in his approachable and friendly way. Speaking of the monogram, he said it would help make the glasses “classic, giving longevity” to the accessories. “We wanted it to still be fresh in 10 years,” he added.

Safilo’s chief executive officer Angelo Trocchia emphasized Beckham’s engagement in the project, revealing, for example, that he pushed to conceive a straight arm in a model inspired by the motorcycle world — a great passion of the athlete — so that the design can be easily worn under a driving helmet. Likewise, Beckham’s own helmet’s visor in orange inspired the color of a group of lenses. 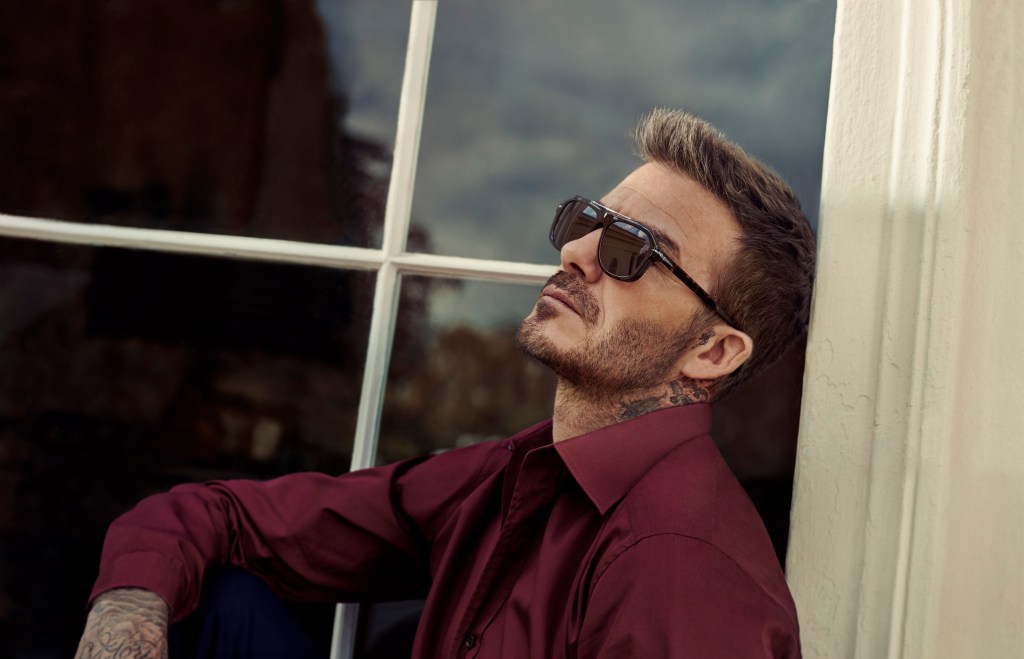 A look from the new DB Eyewear by David Beckham collection.  courtesy image

“I always wanted to go into eyewear, but I wanted the right partner and it was easy to pair with Safilo, given their expertise, “vision and ability to create great quality” products, said Beckham, adding that he was keen for the partnership to “set us apart from anything out there.” Although it’s a men’s collection, which will hit stores next month, Beckham sees it as unisex, and said that, for inspiration, he went through his own collection of glasses, as well as that of his wife Victoria. “We work very hard on our businesses, and I lean on my wife for advice and she loved the collection, as did my sons, who are 14, 17 and 20. I am 44 and I loved it, my dad at 70 would like the majority, it’s multigenerational,” said Beckham, also giving a shoutout to Steve McQueen and Paul Newman for style tips, “part of the mood and inspiration.”

“I wear what I do not to make an impact, but I like to wear what I feel comfortable in, you should be able to wear what you want,” said the former captain of England’s national soccer team.

Trocchia expressed his confidence in the performance of the line, which drew a positive reaction at sell-in, with a few models already sold out in a December preview launch.

“This is important, it’s not a typical license with a fashion brand, and we are rethinking and expanding our world and concept of licenses,” said the executive, who is also banking on the strength of Beckham’s fan base and capitalizing on his digital reach and Instagram followers, who currently total 60.2 million. “I am very confident, it’s the best combination, he has style, he is a gentleman, and he has a full life.” A life that includes friends ranging from Lady Gaga and Tom Brady and his wife, Giselle Bündchen, or Justin Bieber and Hailey Baldwin, who have already received some of Beckham’s models. As reported, looking at boosting its digital business, Safilo in December bought a majority stake in the digitally native firm, San Diego-based Blenders Eyewear LLC from founder Chase Fisher.

In addition to its proprietary brands Safilo, Carrera and Polaroid, Safilo Group, which is publicly listed in Milan and is going through a restructuring, produces and distributes for labels ranging from Tommy Hilfiger and Jimmy Choo to Max Mara and Marc Jacobs.

Just as it was with Fisher, the meeting with Beckham was “a personal alchemy,” Trocchia said. “We met in London and we liked each other, it’s very simple. He really wanted to be engaged, and it happened super fast. He came to Padova [Safilo’s headquarters], and I was struck by his passion for quality and design, and how he was personally engaged.”

The collection comprises 25 styles in four color variations, as well as several tortoise palettes. There are three lines: voyager, motorcycle and heritage.

The U.K. is clearly an important target market, as well as Europe, America but also Asia. “He knows how to express the British style,” Trocchia said. Prices range from 160 euros to 250 euros. Under the 10-year license, the collections will be for both sun and prescription.

Beckham’s namesake business is a broad one, and includes Inter Miami CF, and partnerships with labels including Adidas, Sands, AIA, Haig and Tudor and charity-focused activity such as his work for UNICEF through the 7 Fund, among others.

Beckham was also upbeat about the start of the new season with Inter Miami. “It took us seven years to get to this moment, and we kick that ball on March 14 for the first time,” he said. “I will need good glasses in Miami.”