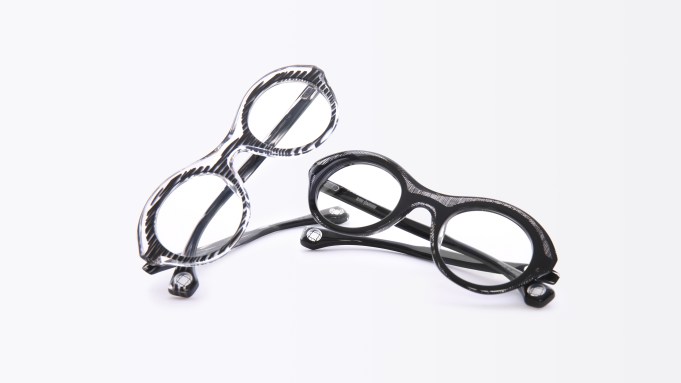 PARIS — Metal and round frames dominated trends at the recent Silmo eyewear trade show here. Round forms combined with other shapes, and increasingly bold looks in metal were one logical outcome. Meanwhile, buyers reported greater demand for authenticity and quality craftsmanship that also reflects the latest fashions. They were not disappointed.

“Silmo gives me a much greater view of fashion, and eyewear is fashion. It’s exciting. Designers are so unique here,” said Linda Cohen, optician and owner of New Jersey-based fine eyewear store, Eye Design. Some favorites included Blake Kuwahara — “he sees what you really want to accentuate in a face” — and Triss Ottica — “unique in terms of color collaborations and textures, [including] leathers, woods and titanium and gold” — plus Amaury, who designs for Paris street artists.

Other trends included vintage looks from the Seventies and Eighties made lighter and more modern, plus sporty, Nineties, hip-hop-inspired interpretations. Bold, athletic masks and aviators were prevalent amid a growing emphasis on the men’s market. Elegant tone-on-tone lenses and frames, as well as creative mixing of materials like acetate and metal, were welcomed trends, while the beginning of a move toward narrow frames was noted. Color tones were bright for the spring season, and also subtle, in pale and matte shades.

Demand for “authenticity” comes as more luxury brands take their production in-house, with a perceived result of increased focus on brand DNA.

Luxury eyewear “has a different focus and different quality now, I can really feel it,” affirmed Moritz Krueger, founder and creative director of cult independent label Mykita. “The big fashion houses are, to me, back in the business. There’s a strong demand for a new definition of luxury, and this includes eyewear,” he said. Despite industry upheavals, including the merger of lens and frame giants, Essilor and Luxottica, Krueger said Mykita is “not afraid,” and is growing, with plans for “a lot of retail expansion.” The aim, he said, is to “make sure that what we do is different and has a value that is understandable, so we are independently protecting ourselves from whatever comes.”

Dita managing director Rosario Toscano agreed more luxury eyewear in-sourcing is helping brands like Dita “because we have always been glued to our design craftsmanship and quality.

“Instead of us following the trend, we are setting the trend where quality stands for something,” he said. Dita has been growing rapidly in the last five years, according to Toscano, and is diversifying with a limited-edition Epiluxury collection. Presented at Silmo, and the product of four years of research and development, the serial-numbered Epiluxury line will be sold in 150 select stores worldwide. The laminated titanium frames with interchangeable parts and materials cost between 2,000 euros and 5,000 euros at retail.

“The word ‘luxury’ is abused today, so we came out with this term ‘epi-luxury’ to say that this is above luxury,” said Toscano. Modeled on the aesthetics and quality of fine watches, “we went deep into the men’s world, to understand what really attracts them, and I think we came out with something really amazing.” By mid-2019, Dita also plans to launch a “Land, Sea, Air,” collection representing three lens technologies.

Massimo Renon, chief executive officer of Italian licensing giant Marcolin, said despite a 2.9 percent decline in Italian eyewear exports in the first half of the year, the company is “overperforming.” “We will have a very positive year compared to 2017, increasing focus on Asian operations and centralized accounts, which are growing in the double digits…so we are targeting a very good 2019,” he said, adding the company aims “to bring novelties to the market faster than competitors, in a rhythm closer to the fashion system.”

Thanks to their one-year-old venture with LVMH Moët Hennessy Louis Vuitton, dubbed Thélios, “Our ability to deal and work in the luxury segment has very much increased,” said Renon. “Marcolin is becoming more and more of a luxury company selling eyewear, instead of an eyewear company selling luxury.” The group displayed a feminine collection from their license with Bally.

Carole Binet, country manager for France and Benelux at major licenser Safilo, said the Essilor-Luxottica merger “is a tsunami for the business,” and that many opticians will need a competitive alternative. “Safilo, which is the second largest group, is probably the best alternative, so we see this as a big opportunity,” said Binet. In terms of top performers, she said the company’s sporty Carrera brand “is exploding right now,” especially with Millennials.

Following a drop in revenues after a rocky 2017 transition to an SAP system, as well as losing the Gucci license, Safilo’s ceo, Angelo Trocchia, will focus on “increasing efficiency, agility, fast decisions and sales execution,” said Binet. “Last year we suffered, and were not able to deliver properly, and respond to the needs of our customers, so they lost confidence in the service level, but not in the quality of the product,” she said. With the new IT system running, “we are dealing with trying to reconquer the trust of customers.”

Kuwahara’s handcrafted eyewear, nominated four times for the Silmo d’Or prize in the three years since its founding, showcased architecturally inspired, contrasting acetate-pattern designs made by laminating two frames together. “I aim to create something that’s artful, but also wearable at the same time, because for me, it’s also about how the frame feels in the hand, how it’s made. It’s not just about visual impact,” the designer said. Frames take nine months to handcraft in Japan, with details including techniques associated with furniture and architectural design. Retail prices start at $599.

Haze, designed by Min Shi, based between Los Angeles and New York, showcased colorful lenses in flexible frames, with geometric-inspired lines, and a new patent for adjusting the size of the frame along the temples. “The shape has to fit the face, but I want to bring fun and wearable designs to customers,” said Shi.