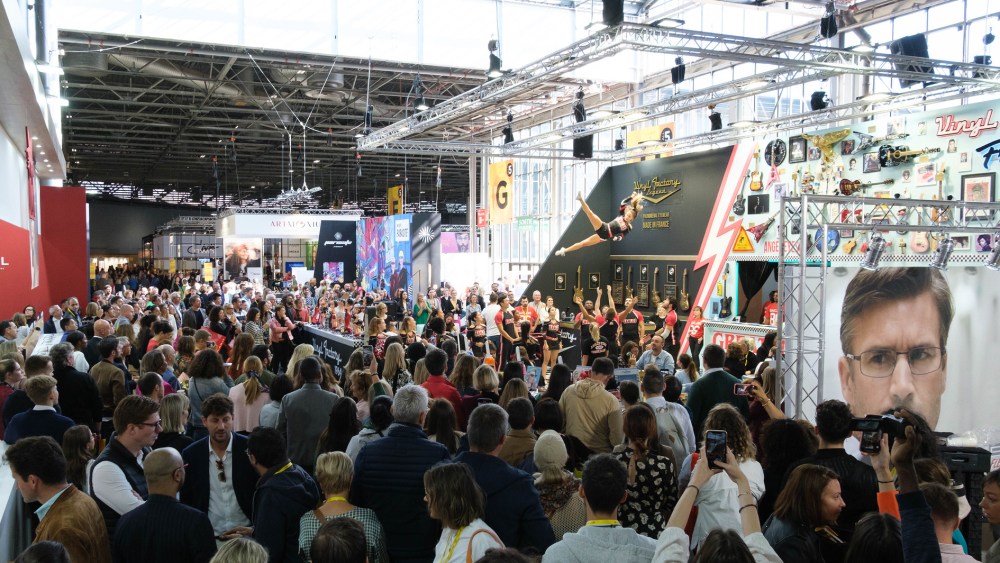 PARIS — While fears of a recession were looming, the atmosphere at the recent eyewear fair Silmo was resolutely upbeat.

Exhibitor numbers and footfall — with 27,000 visitors — were on par with pre-pandemic editions, according to Silmo president Amélie Morel. With 50 percent of traffic hailing from outside France, there was a major return of attendees from the Americas and the Middle East who had not been to the show since before the pandemic.

“It was a really pleasant surprise,” said Morel. “It proves that our profession still has a need for a trade show, it was an important moment for the whole of the sector.”

“We are very pleased to be back at Silmo with so many people attending the show,” said Marcolin head of EMEA Antonio Jové. “Last year’s edition was still affected by COVID-19 restrictions, and it is great to see that now people… are finally back to their ‘habits’…Physical meetings are very important within our industry.”

Bouncing off a strong first half for eyewear players, exhibitors downplayed recessionary fears. “I thought the concern would be more at the center of discussion, but maybe Silmo was not the forum for that because of the excitement of the moment,” said EssilorLuxottica president of EMEA wholesale Chrystel Barranger. Opticians “may be more cautious on the decisions they make, [but] there is also a form of confidence that we are going to get through.”

“Our sales representatives had a good summer, speaking globally, we hear that the sellout was really good with the customers, so we can sell in again,” observed Moritz Krueger, German high-end manufacturer Mykita’s cofounder and chief executive officer.

“Europe this year is what North America was last year, so with a very important rebound,” said Angelo Trocchia, group CEO of Safilo, which returned after sitting out the show last year. “In Europe we are doing very well, North America is returning more to normality, because last year they had a huge rebound. The rest of the world is doing quite well.”

He continued, “If I look forward, I am a little more cautious…inflation is starting to become a reality, I think at the end of the year we will see how the consumer will start to react to this.”

Eyewear players are reporting strong business at the top end of the market and in entry-level categories, observers said. “Luxury is clearly booming, and with decreasing [health care] reimbursement, entry range offers have also been growing faster for some time,” said Barranger.

Supply chain tension continues, meanwhile, and is expected to have an impact on prices moving forward. “In some parts of the world, inflation is rising, so we are in the process of evaluating what will be the impact and how to mitigate it,” said Barranger. “We are doing our best to absorb inflation and we are very cautious on how we might impact the prices.”

“I know that most of the competition has increased prices,” said Krueger. “We are not increasing prices, at least this year. We have to look and see how everything is developing there.”

On the floor of the four-day show, which closed Sept. 26, tech implementation both upstream and down was a major talking point, and the subject of a new digital village space. “We want to be a vector to help the eyewear industry embrace its own digital revolution,” said Sébastien Brusset, CEO and creative director of Lyon-based Jaw Studio, who was involved in putting together the new area.

EssilorLuxottica — the only major eyewear player to have embraced smart glasses in its partnership with Meta on Ray-Ban Stories — was showcasing its latest innovation, a range of glasses designed for gaming under the Oakley license. The frames are designed specifically to be worn with headsets and have bendable arms, while lenses are made to improve on-screen contrast, including on OLED displays, and filter blue light.

“When you think about smart eyewear, people say it’s a gateway to the metaverse for tomorrow, but it’s already started with glasses for e-gaming for example,” said Barranger. “It makes me very enthusiastic about smart glasses: they will create a link with the digital world tomorrow.”

Swedish company Skugga was demonstrating smart eyewear technology it claims is a game-changer, as its modules can be integrated into frames from any brand. The aim is “not to create a piece of tech that fits into a device that people won’t use,” explained chief product officer Alf Eriksson. “Over the past two years we’ve seen massive changes in the will to adopt [with eyewear manufacturers realizing that] otherwise big tech players will dominate the eyewear industry as they do the watch industry.”

After seven years of development, the production-ready technology is equipped to measure motion and environmental elements with a range of potential benefits downstream — from assessing the wearer’s exposure to pollution and light radiation to providing information about posture and movement, with an open ecosystem for app developers. The company took home the prestigious Silmo d’Or prize in the technological innovation/connected products category.

The optical industry has been slow to join the tech train, observers noted — largely because much of the industry is still accounted for by independent opticians. “Opticians are often mom-and-pop operations they can be resistant to tech,” said Cody Cho, Dita’s global vice president of marketing. “Eyewear is behind schedule three or four years in terms of tech.”

Coming from a Silicon Valley background, Cho has made data part of Dita’s universe for several years now. “We’re using a lot of tech for forecasting,” he said.

Other eyewear heavyweights were dedicating space at the show to demonstrating their in-house capabilities to visitors as tools simplifying ordering and improving stock management, for example, and this was also the subject of a talk from Microsoft product marketing lead Othman Chiheb.

On the trend front, outsized frameless designs like Dita’s Embra — its first wireless design for women in 20 years — were standouts, but the brand is also seeing a shift back toward acetate frames after several years of wired pieces dominating, designer Louis Lee said.

The brand is benefiting from demand for its luxury eyewear, according to Cho, and is expanding its stand-alone store presence on high-end shopping streets, with recent openings on Rodeo Drive in Beverly Hills and Brompton Road in London. It is pushing to open another seven or eight stores over the next couple of years, eyeing locations including Miami, Las Vegas, Mykonos, Shanghai, Dubai and Singapore, said Cho.

Legacy brand revamps were a visible marker for many labels in the Marcolin stable, with designs from Pucci and Zegna featuring their new logos.

Overall, eyewear makers cited strong demand for chunky “squoval” shaped frames, statement pieces and a shift away from black toward shades of brown, which had taken a backseat in recent years.

Shifts in positioning among some of the majors were apparent. Safilo, which has been hit in recent years by the loss of several lucrative licenses — including Dior, Gucci and Fendi — has been rejigging its portfolio. The group is looking to up its presence in women’s — for example, with Carolina Herrera, signed last year — as well as with more lifestyle brands like Boss and Isabel Marant, and through its in-house labels Polaroid and Carrera. “We really now cover a very big spectrum,” said Trocchia. “In this moment, we are going very well, the new licenses are going well, the historic licenses are going well, our own brands are going well…”

There were advances on the sustainability front from some of the majors. Safilo was showcasing frames and lenses made with Eastman’s Renew material, which uses chemical recycling, and Mykita has switched all of its acetate frames to the material, claiming to be the first major optical firm to do so across its full lineup, with acetate frames accounting for around half of its portfolio — without increasing prices.