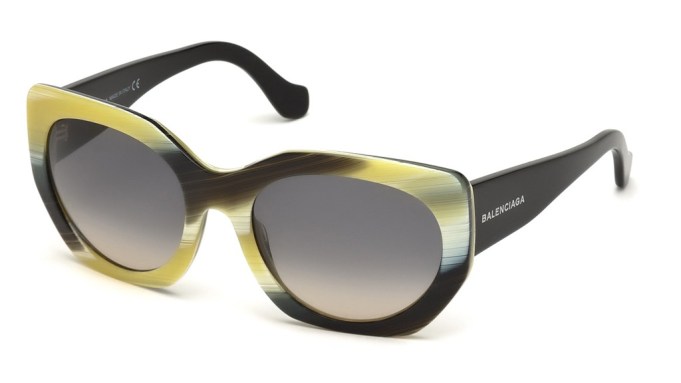 At the International Vision Expo & Conference West and Loft trade shows last month, the community was still abuzz over top-level shifts set off by Kering’s surprise move of taking its eyewear business in-house. The move directly impacts the industry’s biggest players and the cash-generating licensed fashion sunglasses business, but a trickle-down effect eventually could affect the entire category, from mass players to the top-end niche companies. Global eyewear sales, including optics and sunglasses, are expected to hit $95.66 billion by next year, according to Global Industry Analysts Inc.

While Safilo Group SpA — the world’s second-largest eyewear-maker, with 2013 net sales totaling 1.12 billion euros, or $1.44 billion at current exchange — declined requests to comment further on the impact of its licensed Gucci business (estimated at $328 million) going back to newly formed Kering Eyewear at the end of 2016, its Italy-based headquarters insisted via e-mail, “We are at Vision Expo West to talk about our products. No specific interviews on Kering have been released and will not be in the future.”

The company confirmed that, in addition to the expiration of the Gucci license, smaller-volume Kering licenses for Saint Laurent, Alexander McQueen and McQ will expire at the end of 2015, and Bottega Veneta at the end of 2020.

“A bunch of so-called megabrands may choose the exclusivity route. A Gucci, Chanel, maybe a Prada or a Dior could do it because they have the stores, volume and market presence. Without $200 million-and-above revenues, you can’t do it. But they couldn’t do it without diminishing or weakening their optical business,” said Marchon chief executive officer Claudio Gottardi, himself a former Safilo executive, just like Kering Eyewear’s Roberto Vedovotto. “[Kering’s move] creates opportunities for in-house brands and smaller brands. Turmoil equals a chance to capture market share.”

Gottardi said Marchon’s licenses for Salvatore Ferragamo, Chloé, Calvin Klein, Lacoste and Diane von Furstenberg have all seen double-digit growth and a 30 percent overall earnings bump over last year. The company’s 2014 sales should reach $1 billion, according to Gottardi, who added that Marchon will soon disclose new deals with an Italian luxury brand, a sport brand and a more accessibly priced one.

At Vision Expo West, which is geared toward the optical business (the fashion sunglasses business is addressed at Vision Expo East in the spring, as well as at Paris’ Silmo and Milan’s Mido), Safilo’s focus was on its proprietary collections: Carrera, Polaroid, Smith, Oxydo and Carrera by Jimmy Choo. For its licensed brands, Dior, Fendi, Bobbi Brown, Max Mara, Boss and the recently renewed Tommy Hilfiger were at the forefront of its marketing push.

According to a Safilo spokesperson, “We expect to make further announcements regarding new licenses in the coming months as we continue to seek long-term relationships. These could be owners of brands new to the eyewear category as long as they complement our license-brand portfolio. Our particular interest, therefore, lies in the very highest-end luxury, the fast-growing ‘mass cool’ space and the new outdoor-inspired market led by Smith Optics. Finally, we will reinforce our dedication to our existing licenses through increasing innovation, research skills and trend-setting.”

“This is a moment of change and uncertainty but [also] a chance for new competitors to emerge and for us to think about new luxury players in both sun and optical. [Bringing] the sun business into the optical world is one of our top priorities,” said Holly Rush, Luxottica’s president of wholesale, North America, referring to the vast opportunity for fashion sunglasses to retail more in optical stores and doctors’ offices than in traditional retail channels. Rush stuck to the party line about Luxottica’s luxury licenses, which include Chanel, Giorgio Armani, Prada, Polo Ralph Lauren, Versace and Tiffany, being secure, but others speculate about whether a business like Chanel could follow Kering’s route.

At Luxottica, whose 2013 sales totaled $9.7 billion, the show focus was on retailers and offering optical boutiques better selling solutions. Products and sales desks were absent from its megabooth (the shift from product to in-store displays was unveiled at Vision Expo East this past spring). “The industry needs more education on how to sell. So we’re sharing the value proposition and the storytelling, which had not been our strength in the past. It’s a labor-intensive industry, and we make it look easy, which is probably our fault up to now for not communicating,” said Rush.

Through live craftsman and interactive displays, the company emphasized the high-tech and high-touch processes that go into making eyewear, helping to explain why some frames retail for $400 and up; another section, fashioned like a mini-museum, emphasized storytelling —in this case, cash cow Ray-Ban; and a model store, which showed affordable and easy fixtures and display ideas that retailers could purchase from the company to increase sales.

At Marcolin, which doubled its presence in the U.S. market by acquiring, late last year, mass-brand maker Viva International — maker of licensed brands Guess, Marciano, Skechers and Candies, among others — Fabrizio Gamberini, ceo of Marcolin USA, was bullish. “We’ve pretty much doubled down our revenue in the U.S. with that deal,” he said. “After 2007, the market completely changed. It’s good to be present in different territories, with different categories.”

The company was also one of the few to have, on hand, 2015 product through May to show select customers: styles from Tom Ford, Balenciaga, Montblanc and Roberto Cavalli at the high end to Swarovski, Dsquared2, Diesel, Guess and Timberland. “We call it the Silmo tour, and we started it four years ago, to the point where we [now] hold 28 events each year, around the country. It’s cool, and it generates business,” he said. Of the industry shifts, he said, “Generally speaking, these are good changes. At the moment, we are focused on the integration of the Viva business into Marcolin.”

Marcolin holds the licenses of Kering brand Balenciaga and LVMH’s Pucci, which recently renewed its agreement.

Despite the business moves, the focus was still on product for the many companies that showed at Vision Expo, both in the Sands Expo and the suites at The Venetian, plus at the ultraniche Loft show at the Mandarin Oriental. Key trends included a heightened and more tech-driven use of materials, from acetate (crystal, translucent and otherwise marbled, layered or fused) to metal (steel to titanium to gold, much of it ultrathin, laser-cut, perforated or otherwise textured) to semiprecious stones, crystal, leather, horn and high-tech, flexible substances. Style-wise, colors from blush to blue remained strong, as did color-blocking; mixing materials; round, geometric and shield shapes; and mirrored and polarized lenses. Being unique in a sea of product was key.

“Differentiation is fundamental for premium brands to have a competitive advantage in the market. It is important that the unique DNA of the brand is communicated in every part of the brand strategy and in a consistent manner. The translation of a brand’s icons into the eyewear collection and the presence of common design elements within the ready-to-wear collection are a must. Distribution also plays a key role. Premium designer brands require a quality network and a high-quality presentation in select stores,” said Glenn Rusk, commercial head of Safilo North America.

At Italia Independent, signature velvet flocking on classic frame shapes caused a stir as customers checked out the myriad rainbow and printed offerings (priced from $127 to $1,300 retail, with core styles at $129 to $197) that coincided with the brand’s other initiatives in apparel and accessories, such as its Adidas launch in Milan at the same time. Niche brands such as Bevel and Salt Optics, two of 20 selected companies showing at Loft for its second Las Vegas show, emphasized simplicity and lightness in frames, mostly ranging from $300 and up, retail.

In other news, Los Angeles-based RetroSpecs & Co. will launch a new vintage-inspired, highly crafted line, called Cuthbert & Chen, that will retail from $600 and sell only in its brick-and-mortar stores and select retail partners. The move is a reaction to disposable trendy frames and other fast-fashion-style eyewear brands and pure-play e-commerce companies, signaling a perceived need in the market for more high-end, limited-edition product.