At the MIDO fair in Milan, round, cat-eye, Wayfarer, half-rimmed and aviator shapes proliferated. 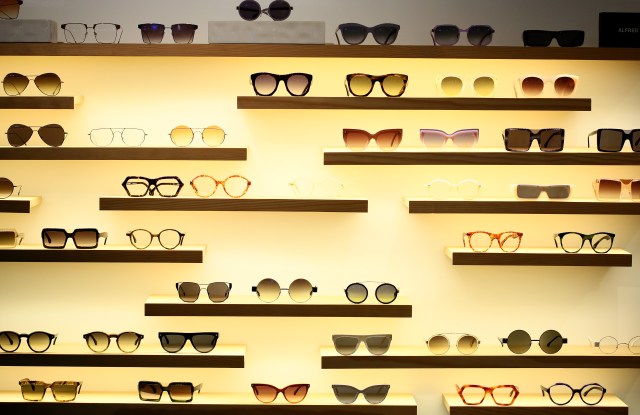 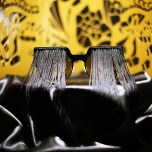 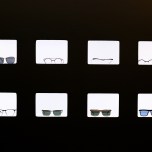 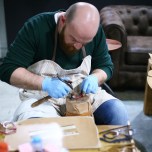 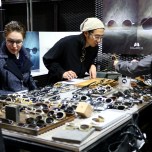 MILAN — Mixed materials such as contrasting acetates; metal; leather, and wood in surprising reinterpretations of vintage and classic shapes were the main trends to emerge in spring 2017 eyewear at the MIDO fair here.

Even with all the innovation on display, major eyewear groups primarily focused on their core brands, rather than introducing new labels. Marchon — whose licenses include Calvin Klein, Chloé, Karl Lagerfeld, Salvatore Ferragamo, Marni, Etro and Nike — was among those leading the trend.

“What’s important to understand is that we reorganized our brand portfolio into three pillars: fashion, lifestyle and performance,” said senior vice president Thomas Burkhardt, who joined the company a year ago.

He explained that regrouping the 21 licenses enabled Marchon to focus on what drives consumer desire behind the sale: trends, technology or simply good frames at a good price. The focus for the coming year is to build existing brands, especially fast-growing ones such as Nike and Chloé, and to slow brand acquisition down to just one this year, Longchamp.

“We want to make sure that those strong brands get even stronger before adding new ones. We still need to digest a number of new launches, like Columbia, like Marni, that we continue to make sure are off to a good start,” Burkhardt said.

But Marchon does have one launch this year that’s likely to generate a lot of attention — the first designs from Raf Simons for Calvin Klein Eyewear. “For this year, the exciting thing is the arrival of Raf Simons at Calvin. Raf is a big fan of eyewear. He has always been proud of his collections,” said Burkhardt, who added that Simons will start working his way through the entire spectrum of Calvin Klein eyewear.

Elsewhere, Wayfarer-style sunglasses came with integrated brain sensors, giving brainwave feedback regarding the wearer’s ability to achieve focus. The greater the agitation or distraction, the louder the sound of ocean waves crashing over a software app. The Safilo Smart Eyewear was just one of a battery of initiatives reeled off by chief executive officer Luisa Delgado as the company she helms faces its first year without the Gucci license, the last of the clutch of designer brands that the Kering Group phased out of Safilo to develop in-house.

Safilo also launched the digital museum — galleriasafilo.com — with 300 pieces on show, including glasses that belonged to Elvis Presley, Elton John and Madonna as well as spectacles spanning from the 16th to the 21st centuries, all drawn from the company’s permanent collection of 3,000 pieces. The group introduced a design competition with L’Uomo Vogue, gathered women in global optics into a network, and created an optics workshop with artisans honing eyewear at the Safilo stand.

Most importantly, Delgado underlined progress developing the going-forward portfolio with a strategic emphasis on proprietary brands, including Smith, Polaroid and Carrera, as well as the group’s 5.2 percent growth in wholesale turnover in 2016. Safilo continues to produce under license brands such as Dior, Fendi, Givenchy, Max Mara, Jimmy Choo, Marc Jacobs and Elie Saab. But the group gave private previews of Safilo branded eyewear to be launched in fall 2017, and debuted its first line of exclusive atelier glasses — the Oxydo collection of avant-garde, 3-D printed, wearable sculptures.

“This was clearly the MIDO of our own core brands of Safilo, where we put our best of the best into our own core brands, which is very new for Safilo, because those were some sidekicks in the past. Today, they are the core of the core and the heart as they should be,” Delgado said.

Luxottica, which has shaken up the sector by revealing plans to merge with French optics firm Essilor, introduced Dolce & Gabbana’s limited-edition Mambo frames, a metal style shaped like small cartwheels, and studded with multicolored or clear crystal Swarovski around the lenses. Giorgio Armani pilot sunglasses debuted in wood and acetate mixes and 18-karat gold.

The focus on product renewal by the industry’s giants have forced independents to fight back with innovations of their own, according to Léonard Lasry, who was celebrating the 10th anniversary of the independent French fashion eyewear brand, Thierry Lasry, where he works with his brother for whom the company is named. Saks Fifth Avenue, Bergdorf Goodman and Colette are among the stores that carry the brand.

“All the big fashion names have improved. Since two or three years ago, they are showing strong collections. They are bringing new quality in the licenses, so they are back in the market,” Lasry said.

He also cited pressure from new entrants vying for the attention of novelty-seeking buyers, and the rise of strong designs by eyewear makers in South Korea, where his business previously thrived thanks to the globally viral “Gangnam Style” video in which pop star Psy wore Thierry Lasry frames. The company has responded to setbacks by heavily revamping the aesthetics of the collection, opening a new flagship in Paris and changing partners in Asia.

Lasry introduced metal for the first time among its futuristic-vintage, thick acetate frames. Double metal wire fronts replicated the silhouette of signature acetate shapes, and metal was also integrated into collage frames made of mixed materials, colors and textures. Limited-edition lines were made of decades-old stocks of Mazzucchelli acetate.

Lapo Elkann — a member of the Agnelli dynasty — worked with Mazzucchelli to devise a material that mimicked marble and acetate’s aesthetics, but was softer for flexible polyurethane front pieces that could be swapped for different looks.

“It is a totally innovative concept. We are the first in eyewear to develop something like this,” said Elkann, who cofounded Italia Independent. Frames retail for 127 euros, or $134, and the colored accessories go for 19 euros each, or $20. Mirroring and paint originating from the automotive industry shimmered on lenses.

The Me Myself and Eye collection is part of Italia Independent’s relaunch that included collaborations with Adidas, Hublot, Juventus, Pinko, and, fittingly, the Fiat 500, an automobile Elkann has embraced and promoted that turns 60 this year.

Italia Independent’s capital increase and management shake-up last fall, which Elkann said included the dismissal of the previous ceo, board members and roughly 30 to 40 percent of management, now allows him — and the company — to focus more keenly on product development.

The company’s new ceo, Giovanni Carlino, said he aimed this year to turn a new page for the company by shuttering three of its 10 stores — in Bologna, Italy; New York, and Paris — and focusing on the core business.

Meanwhile, Hoet Couture expanded its highly exclusive, 3-D-printed titanium collection to include half-rimmed models. Hoet has pioneered 3-D-printed titanium bespoke glasses for more than five years, with styles that have a fine honeycomb construction that is transparent from certain angles. Titanium models retail at 1,800 euros, or $1,900, a pair — plus an investment on the part of the optical store. Hoet luxury frames were also available in buffalo horn, mixed materials and gold with diamonds.

The company — which is headed by a father-daughter design team Bieke and Patrick Hoet — was chosen by Japanese lens manufacturer Hoya to launch a facial scanning machine in Europe this year, which will be used to create made-to-measure 3-D-printed polyamide sunglasses designed by Bieke Hoet.

Oregon’s Shwood eyewear, known for wooden frames and whose retailers include Nordstrom and Saks, is continuing to experiment with cross-sectioned resins packed with natural materials, like shells or pine cones, collecting enough cactus skeletons to create a limited edition of about 100 pairs. Meanwhile, improved construction techniques for wood laminate frames resulted in lighter, stronger frames that allowed new design elements like bridge contours to be incorporated.

Meanwhile, eyewear firm Mazzucchelli offered a preview of fashion trends for 2018: cold and iridescent pastel tones like mother-of-pearl and coral pink; dark synthetic materials interrupted by contrasting brights, such as neon yellow, galaxy purple and petrol green; vintage styles in colors like spicy brown, purple orchid or burgundy, and subdued nudes and neutrals, from driftwood to warm beige and from pale skin tones to pink.

The mood overall at MIDO was optimistic, despite slackened sector growth and economic uncertainty.

Two years of double-digit export growth for Italian eyewear slowed to a low-single digit last year. Exports in 2016 totaled 3.58 billion euros, or $3.8 billion at current exchange rates, up 3.6 percent over 2015, according to preliminary findings by the Italian eyewear trade organization Associazione Nazionale Fabbricanti Articoli Ottici, or ANFAO. Thirty percent went to the U.S., while 50 percent remained in Europe.

Because exports absorbed nearly 90 percent of Italian production, the two indicators grew in lockstep. Italian eyewear production in 2016 amounted to 3.7 billion euros, or $3.93 billion, marking a 3.7 percent rise over the previous year. ANFAO expressed concern over the uncertainty introduced by the election of Donald Trump in the U.S. and the Brexit vote in the U.K., but especially over dramatically slower growth in global trade. Prior to the global crisis, it said, global GDP grew at 3.2 percent a year and the exchange of goods by 6.8 percent. Now global GDP growth hovers at 2.4 percent, while global trade creeps forward at 1.8 percent a year.

ANFAO did not comment on the impact of the seismic shift happening at the heart of the sector — the merger of two industry goliaths, Italian eyewear Luxottica with French lens-maker and optics specialist Essilor — but buyers from smaller companies at the fair expressed concern.

“It results in a dangerous power,” said Sandro Zannella, an optician with a shop in Rome. He reported that it was the talk of a meeting the day before of his trade association, the Associazione Italiana Ottici. “They fear this phenomenon very much,” Zannella said of his fellow opticians.

As for himself, he was already too small to be permitted access to Luxottica products he wanted to buy, like Ray-Ban, but for the moment he had enough choices between large players like Marchon and the bevy of independent brands at MIDO to develop his business.

More than 55,000 people attended the three-day MIDO exhibition, which closed Feb. 27, marking a 5.5 percent increase over the previous year and setting a record among its 47 editions, organizers stated afterward.

MIDO saw 130 new exhibitors among its crowd of more than 1,200, doubling the size of its More section of high design entries as the cutting-edge Design Lab section sold out. For the second year, the fair continued a special area called Academy Lab for new design entries.

“We have understood the direction that will maintain the level we have reached and also grow,” said MIDO president Cirillo Marcolin, who is also a board member of the Italian eyewear giant founded by his family, Marcolin SpA. “We try not to grow old. We try to stay young with a young sector without losing the established [players]. So far we’re making it happen, given that our fair continues to grow each year while fairs in general have been suffering.”