The actor has created a line of frames for Privé Revaux inspired by his character in the Disney Pixar film "Soul."

Jamie Foxx in The Mentor frames he designed for Privé Revaux.

Jamie Foxx has quietly been a partner in the Privé Revaux brand since its launch three years ago. But he’s now ready to step into the spotlight.

The actor has worked with the affordable eyewear brand on a capsule collection tied to the Disney and Pixar animated film “Soul” that will be released on Disney+ on Christmas Day. The film is a major breakthrough for Foxx, who provides the voice for Joe Gardner, the lead character — the first time a Black actor has been the lead in a Pixar movie.

To celebrate, Foxx has created three blue-light blocking frames inspired by the glasses Gardner wears in the movie: The Mentor, an oversize frame; Born to Play, a simple round frame, and The Half Note, a traditional circular shape available in a variety of colors. Each design features hidden messages and iconography from the film on the inner and outer arms of the frames.

Foxx said that he’s been involved with Privé Revaux “behind the scenes” since the beginning. The brand created by entrepreneur David Schottenstein alongside other celebrity partners, Hailee Steinfeld and Ashley Benson. In February, Safilo purchased a majority stake in the brand.

“Our goal is to make eyewear where we take our time with the design and we make it hot,” Foxx said. “This collaboration with Privé Revaux, Disney and Pixar just made a lot of sense for me and for our brand. It combines some of my passions and brings this character, Joe Gardner, to life with something you and your whole family can wear. And I hope that audiences take away from this collection pure joy.”

“Soul” is the story of a middle-school band teacher who gets the once-in-a-lifetime chance to play at a New York City jazz club, but before that can happen a misstep brings him to The Great Before, a fantasy world where souls get their personalities and quirks before coming to Earth.

Foxx said he “really feels good” about being the first Black lead in a Pixar film. “My 12-year-old daughter told me I finally made it now that I’m in a Pixar film. She didn’t really care about all my other projects before this, but she’s really excited about this one. Her and her friends got to see it and they all loved it. I think that we are going through a lot in 2020 and I think that we just need something good to look at. We need a good feeling and Joe represents a lot of people that aren’t being seen right now. Also — it’s 100 percent on Rotten Tomatoes so for all you cinephiles out there — be sure to check it out because it’s special.”

“Soul,” which was originally slated to be released in June but was postponed because of the coronavirus, “is about your passions,” Foxx said. “It’s about what you feel. At this point in our lives, we need something like “Soul” to bring us all together. It’s about those pursuits of passion and music and whatever it is that makes you smile. What makes me smile, what makes me feel like me, is having a pair of fly and affordable frames. With the right pair of frames you can celebrate your style and your outlook, so that’s what we wanted to bring to the table with these frames.”

Foxx said the process of designing the frames opened up a whole new world to him.

“The whole reason we started Privé Revaux is I took some pictures with some shades on, people on my Instagram were like: ‘Oh, my God, are those the new Guccis, the new Ferragamos?’ They were actually from a gas station, they were $18. So I called David Schottenstein and some friends and said: ‘Why don’t we make an affordable, quality glasses brand?’ So we designed glasses starting at $29.95. We feel like when people are following you and they see you dressed in whatever, we wanted to be able to bring them into our world. And we put a whole lot of time into the quality so that we can give them to J.Lo and she’ll want to wear them.” 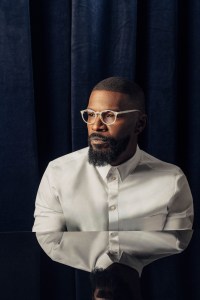 Jamie Foxx is the first Black lead in a Pixar film.

A major fan of eyewear, Foxx said he owns “a thousand pairs of shades, including about 50 pairs of Privé shades, which I also give to my friends and family. I like to say that my style is ‘grown man fresh’ but also pretty simple. A few years ago, I was in Singapore where there are the most incredible stores in the world. They have a whole Louis Vuitton island. There’s Gucci. There’s everything. And I was trying to find a shirt. At most of the stores all the shirts were thousands of dollars, and just didn’t fit right. Then I hit Zara up, and found the shirt for $27. Everyone was like, ‘Jamie, where’d you get that shirt from?’ Also my guy, Jack Manson keeps me right — his line is called Jack Manson Signature.”

Foxx was able to record his lines for “Soul” before the pandemic and since then has written three scripts. “Two of them have sold so far. I’m trying to stay creative and really enjoy time with family. This difficult year has brought us closer,” he said.

Next up for the actor is “Dad Stop Embarrassing Me,” (Netflix), a father-daughter comedy that he executive produced. It’s inspired by his relationship with his daughter Corinne, who is also a producer on the project — only fair, he believes, since it’s based on their real-life relationship. In addition, he said, he’s also got another Netflix project, “They Cloned Tyrone,” in the hopper. No premiere dates have been announced for either project.

But while he’s waiting for that, Foxx is focused on the Privé Revaux launch. The glasses, which are available in black, brown tortoise, clear, turquoise and pink, will retail for $39.95 and are available on the brand’s web site and at other select retailers.

“We are thrilled to support our partner and cofounder, Jamie Foxx on his latest project, “Soul” with Disney and Pixar,” Schottenstein said. “It is an honor to collaborate with the storytellers that have brought some of the most memorable characters to life through animation, which inspired us to do the same in our medium of eyewear. These collaborative blue light-blocking frames celebrate the film’s themes of mentorship, discovering your passions, and celebrating the little things in life. We hope this new collection will bring joy, comfort, and eye protection to our customers and Disney fans around the world who wear them while streaming the film at home and for years to come.”