When Kering surprised the industry last fall with the news that it would bring its eyewear production and distribution in-house, it began to chip away at the long-accepted notion that licenses for this category are the most clear-cut strategy — and necessary.

Vedovotto should know. He spent more than 10 years on the receiving end of licenses at Italian eyewear giant Safilo Group, where he exited as ceo in November 2013.

“We are talking about very complex objects, even though they may appear very simple,” he explained. “They are similar to watches in terms of manufacturing complexity because of the processes behind them.

“Also, you can only do [this] if you have critical mass and a group with a relevant portfolio of brands already active in the eyewear category. There are not that many players in the luxury industry that can do this. You must have a team of experts in place; it would be very difficult to start from the ground up,” said the executive during an exclusive interview at the company’s 16th-century Renaissance villa outside Padua. Kering restored the villa to house the operation, with more than 30 employees dedicated to design, research, product development and supply chain management. Sophisticated machinery as well as new highly technical eyewear designs contrast with the frescoes and wooden ceilings of the building, surrounded by well-tended gardens in a location near the key eyewear production districts, Cadore and Belluno, as well as Valdobbiadene and Treviso, in northeastern Italy. 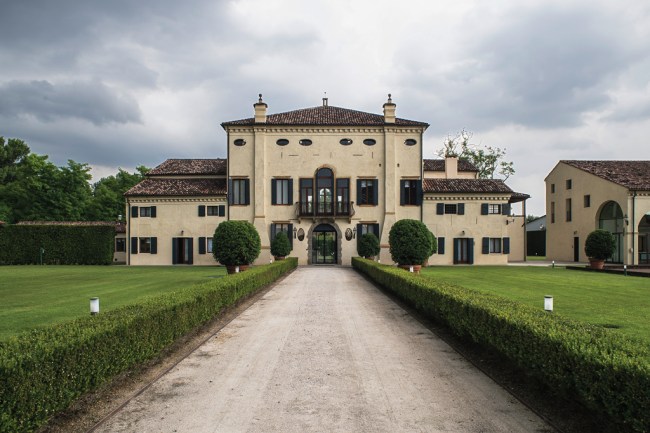 Vedovotto acknowledged the timing was also key, coinciding with his own exit from Safilo and the expiration of some of the Kering brands’ licensing agreements, such as Boucheron, Stella McCartney, Saint Laurent, Alexander McQueen, McQ and Puma. Also key was the early termination of the Gucci license with Safilo as Kering is adjusting its 20-year partnership with the Italian manufacturer, terminating the current license for the cash-cow Gucci brand at the end of 2016 — two years earlier than planned — in exchange for compensation of 90 million euros ($99.3 million at current exchange) to be paid in three installments. Kering will initiate a product partnership with Safilo for four years starting in 2017, with options to renew.

Vedovotto underscored that this was “not just another eyewear company, but a luxury company in the eyewear industry.” To wit, the executive is working to raise luxury content even further. “The main goal is to elevate eyewear to a core category for the group’s brands, aligning strategy and positioning with the other product categories by controlling the value chain, from design to product development and the supply chain, from branding to marketing and sales.”

“Our design and product development teams will work alongside the brand teams as colleagues and no longer as licensees, having privileged access to strategies, brand codes and seasonal trends,” said Vedovotto.

Besides strict control over sourcing, quality and distribution, the company will be able to partner with top producers in Italy and Japan, in particular, and leverage the network of Kering’s monobrand stores and other key channels, such as travel retail and department stores.

“Eyewear is already a fundamental accessory but we are aiming at making it core, even more strategic and aspirational for our consumers,” Vedovotto said, “thanks to the development of collections that are increasingly more integrated with the values and the design codes of each brand.”

Citing the consistant double-digit growth in the premium-high segment of the global eyewear market over the past few years and the strong profitability of the category, he observed, “Together with its accessibility in terms of price compared with other luxury products, it’s easy to understand how strategic it is for all luxury players.”

Vedovotto noted that Gucci eyewear is one of the industry’s top players, worldwide, and he believes the new strategies will allow Kering Eyewear — which, besides Gucci and the other brands listed above, also includes production and distribution of Bottega Veneta among others — to be “one of the top five players in the industry.”

He pointed out that Kering’s long-term plan contrasts with “short-term rationales that are typical of the licensing model in the market, with brands that are over-distributed and products of a quality that is sometimes debatable, accompanied by a real invasion of offers from low quality e-tailers.”

Vedovotto sees continued grow for the category, in particular at the luxury end. “The ophthalmic segment is growing also for the increased use of smartphones and tablets. Sunglasses, while growing in traditional countries, are benefitting from the emerging middle class in more recently industrialized nations, such as China, Malaysia, Indonesia, Thailand, Brazil, Mexico and Turkey.”

The U.S. is the premier market in the world in eyewear and is a fundamental market for the company, too, said Vedovotto, touting a new showroom in Broadway and operations in Bridgewater, N.J., to serve the local market in a timely way.

Other top markets for Kering Eyewear are China, France, Italy and Korea. A priority is to develop Brazil and Mexico.

The group’s most immediate project is to present the first collection through its first sales campaign this month. “This will represent our initial approach to the markets ahead of the spring 2016 collection, which will be Kering Eyewear’s first real debut,” said Vedovotto. The company in the past year has opened nine subsidiaries in key territories: France; the U.K., Northern Europe and Benelux; Spain and Portugal; Germany-Austria and Switzerland; Hong Kong; China; Japan; Singapore, and the U.S. and Canada. Regional headquarters are in Hong Kong and New York.

Retail distribution will be managed through the directly operated stores of the Kering brands. Wholesale distribution will be handled through specialized independent opticians, national and international chains, department stores, travel retail, e-tailers, brand franchisees, and “loyal distributors that invest in those countries where we don’t have branches, such as Turkey, the Middle East and Latin America. The sales model is closer to fashion and fragrances compared to what we are used to for this category,” he said.

In terms of fashion, Vedovotto predicted “a little more metal, maybe together with acetate.” He expects more mature labels to reinterpret the codes of their brand, without emphasizing the logo. “There is also deep research into color for acetates, but also for lenses, with an increasingly higher performance. Technology supports us in a key way in the development of products,” he remarked. Suppliers become the group’s partners “because they follow us in the research and product development process.” Investments in advanced machinery will allow prototypes to be mainly developed in-house. “Research and ultimate product development are key in our mission.”

Kering Eyewear claims to be one of the top five players in the premium high-end segment, with a business of about 350 million euros, or $459.6 million.

When the news of this strategic development broke, analysts wondered if others would follow the French group. Asked to comment, Vedovotto said: “I believe other players at the moment are in a wait-and-see mode, they are curious. They will only truly be able to evaluate our project once we are active in the market.”