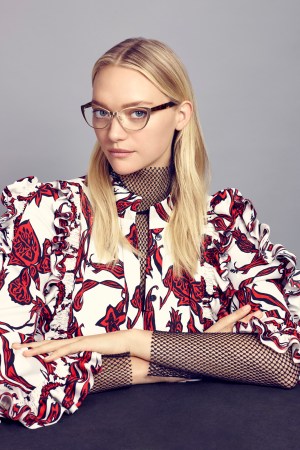 The Paris-based designer unveiled the 20-unit collection at an event at the historic Carthona mansion in Sydney’s Darling Point on Tuesday evening.

The collection is comprised of 14 optical glasses and six prescription sunglasses, ranging from 199 to 249 Australian dollars,  or $149 to $186 at current exchange. It is manufactured by Specsavers Australia and will be sold exclusively at the company’s 320 stores across Australia and New Zealand. Customers will be able to view — but not buy — the range on the Specsavers web site, as the brand claims the product needs to be fitted in store.

A former model and magazine stylist, Ellery has created a buzz for her sculpted tailoring and signature flared sleeves and bell-bottoms since launching her label in 2007. The designer has shown in Paris for the past six seasons, the last two on the official schedule. Ellery’s footwear and denim ranged bowed in Paris in March. Leathergoods and a second Specsavers collection are also in the pipeline, she added.