The Los Angeles-based eyewear guru will finally launch his own line in December. 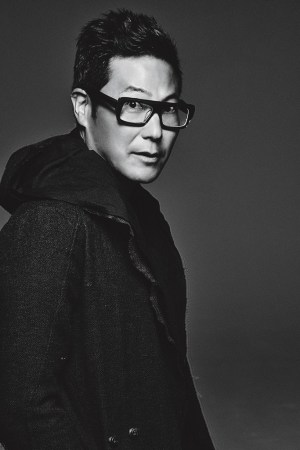 Los Angeles-based eyewear guru Blake Kuwahara, who has designed frames for John Varvatos, Carolina Herrera, Coach, Behnaz Sarafpour, Jil Sander and Isaac Mizrahi, among others, will finally launch his own line in December. Kuwahara, a former optometrist who has spent more than two decades in the eyewear design business, takes his love of architecture and engineered materials to a new level with the nine-piece sun and optical line, which will retail for $599 to $650 in 100 select doors worldwide.

The designs combine a crystal acetate outer frame with colored or patterned acetate inner frames to create spatial tension and a frame-within-a-frame effect, while other styles combine acetate and titanium. Named for architects — the styles are called Wright, Ando, Zaha, Eames, Nouvel and so on — the frames are no small feat of engineering in themselves. The normal scrap rate for high-end, hand-crafted eyewear is 10 percent, whereas for Blake Kuwahara it is 50 percent, due to the exacting technical nature of laminating and fitting the materials and parts perfectly.

“With eyewear, we have very little real estate to work with, just two temples and a front. Working with engineers has become an important part of what we do. Once you sort out the technical stuff, you can create a whole new look by using materials in a very different way,” said Kuwahara, who pioneered the concept with his first line, Kata Eyewear (the Japanese word for space and form), in 1990.

His new line allows him to return to his own visionary aesthetic. “The ideal customer is someone who can appreciate the artfulness of the eyewear itself and who’s culturally in the know, ahead of trends but doesn’t want to look too trendy. One client put it perfectly by saying, ‘I don’t want to look like I own an art gallery, but I want to look like I visit one.’ ”

Kuwahara likens his craft to fashion — his other company, Focus Group West, is a brand creation and consulting firm, which launched Varvatos and Herrera eyewear and counts men’s suit-makers among its apparel clients. “The runway is where eyewear, as a category, gains much more recognition. As with apparel, where something may start off as runway — it tends to be more exaggerated — now our eyes are trained to look in a different way. It doesn’t look wacky anymore. Think Thom Browne when he first showed the cropped suit. Now it seems almost commonplace. The same goes for eyewear. There’s a smaller gap in what’s shown and what retails.”

As for wearables, Kuwahara calls himself “low-tech,” but said, “If we can get technology to the point where it’s elegant, then I think it would be something with greater mass appeal. The way it is now, it’s a little too conspicuous. With the new Google product, you can take a picture just by blinking. That’s a little too invasive.”