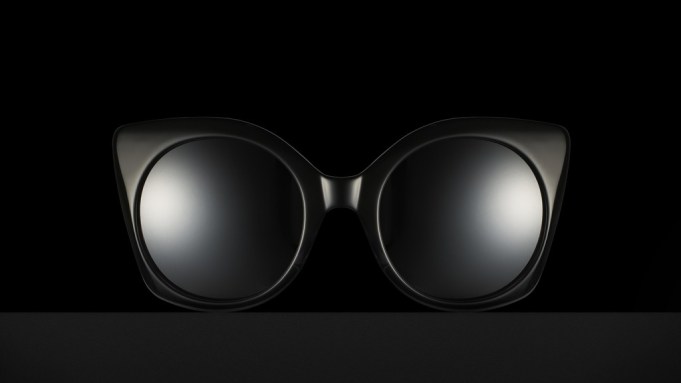 PARIS — Winds of change are stirring in the luxury eyewear category, with the crowded, highly competitive world of licenses in turbulence as Kering is poised to fix a new standard, following the company’s decision to take its eyewear business in-house.

Executives attending the recent Silmo eyewear salon here said luxury brands are going to have to rethink their plans as the death knell sounds for the homogenization of the masstige eyewear segment and its existing distribution model. Fashion houses, they say, are starting to measure the gap between the quality of outsourced eyewear lines and the luxury positioning of their mother ship. The eyewear-licensing love story is far from over, however, with the eyewear business being a whole other métier in itself.

“The companies [that] make eyewear are best suited to produce eyewear — we have the contacts, the infrastructure, the know-how — and I think it will probably continue that way for some time to come,” said Séamus McClintock, business development manager at Brando Eyewear, a new business division of Mondottica. Brando, geared to create, market and distribute high-quality, directional product, launched the Yohji Yamamoto eyewear line at the event.

Yamamoto, who issued a three-word brief — “dramatic, avant garde and/or intelligent” — wanted “strict approval” on every element of the collection, from the initial sketches, color choices and prototypes down to the booth at Silmo, he said. The cutting-edge collection, which is produced in France and spans 17 optical and 13 sun styles, features bespoke acetates by Mazzucchelli and monochrome lenses by Christian Dalloz.

“Usually, in licensing deals, you agree to abide by the ethos of the company and follow [its] design direction, but there’s not usually so much involvement. With Yohji, it was a very different story,” said McClintock. “You may see more of the Yohji approach, where they take a much greater interest in the development, but I still think the knowledge that eyewear companies have in getting things to market is of superior value to doing it in-house.”

“I think it creates a necessity for both parties to be more ingenious, to be more productive, and to find better ways of making their industry work, because the impact is huge — I mean, we’re talking a lot of dollars. I think every five years you go through these shockers, and you need to learn how to navigate it,” commented Miami-based eyewear retailer Edward Beiner, who cited rising demand for niche brands. Key players include New York’s Illesteva, whose eyewear designs are made in Italy. “That is probably about the hottest product in demand — real niche. We can’t keep it in; [it’s] flying out [and sells] over 100 pieces a month. It’s really underground.”

Some predict a shaking out of the market. “The situation needs to have a new balance because the interests are not aligned anymore….Some will die, some will have to re-think their strategy. [High-end brands] will likely be sold only in their own selective distribution [channels] — definitely, the model of the small independent optician selling Gucci glasses at 250 euros is over,” said Andrea Tessitore, cofounder and chief executive officer of Italia Independent, which has big ambitions for the accessible luxury eyewear segment. Swatch is a major inspiration. “They brought color, emotion and affordable luxury….This revolution that Swatch did in the Eighties has not yet happened in the eyewear industry.”

Italia Independent, which is looking to bolster, over the next five years, its wholesale growth by increasing brand awareness through collaborations and store openings in key locations, is testing a new kiosk concept in strategic retail and airport spots in Dubai and Columbia. Known for innovative treatments and materials, the company has new designs that include a classical women’s frame with a leather-like “craquelé” finishing on the temples.

For Tessitore, eyewear, as a “pretty young” industry, is the perfect candidate for the next “It” accessory. In Europe, the average woman will buy one pair of shades versus 10 handbags over three years, he said. “What the market is lacking, in my opinion, is the fact that nobody has been able, till now, to make sunglasses a real accessory,” said Tessitore. “That’s the beauty of the challenge. That’s what every company should think of, because it’s not happening. The next question the industry should ask itself is, who is going to make it?”

Retailers reported healthy business, with Asia and the Middle East among the strongest markets, but said classic darker frames continue to be an easier sell. Key eyewear trends included oversize round shades, inventive color combinations and creative temples, with acetate the season’s main material. Vuarnet and Revo, two French companies famous for their mirrored lenses, are making a comeback in sunglasses, Beiner observed. “They’re almost dinosaurs that are being reawakened by the new trends of today,” he said.

The men’s eyewear category continues to percolate, with strong demand for premium styles. “We kill it with men. We have one of the strongest men’s markets in eyewear,” said John Juniper, cofounder of Dita, which also owns the license for Thom Browne eyewear. New styles from the Los Angeles-based eyewear maker, which combines an Old Hollywood mood with classic manufacturing from Japan — “where the men that are building it are 85 years old and have been doing it for 40 years and just have the touch and the polishing tricks that no one else has,” Juniper noted — include a wayfarer frame in titanium and acetate.

Ross Vance, cofounder of L.A.-based Sama Eyewear, cited carbon fiber — a superlight, technical, Space-Age material used in airplanes and Formula 1 cars — among new luxury men’s trends and said, “Our male consumer, over the past two years, has caught up and passed our female consumer considerably, and, also, they are looking for the higher price point.” Leveraging its Hollywood connections — Vance works closely with Brad Pitt on his movies and personal wardrobe, for instance — a run of major celebrity endorsements continue to stoke demand.

French basketball star Tony Parker put in an appearance at the four-day event, which wrapped on Sept. 29, for the launch of Bollé’s new eye protection and prescription program for young athletes.

Masunaga, a 109-year-old, family-owned company that produces for brands including Dita and counts Colette among its stockists, claims to be the last remaining Japanese manufacturer capable of producing a pair of glasses from A to Z. When asked whether the prospect of luxury houses upping their game in the eyewear field made him nervous, Yoshi Saito, the firm’s president, replied: “Not yet.

“Handbags have to come from handbag manufacturers, watches have to come from Switzerland — not just one big name doing everything. People know that Rolex makes good watches or IWC and so on, and there are, of course, fashion brands that make watches, too, but the perception is that watchmakers make better watches,” he said. “I want that to happen in the eyewear market.”