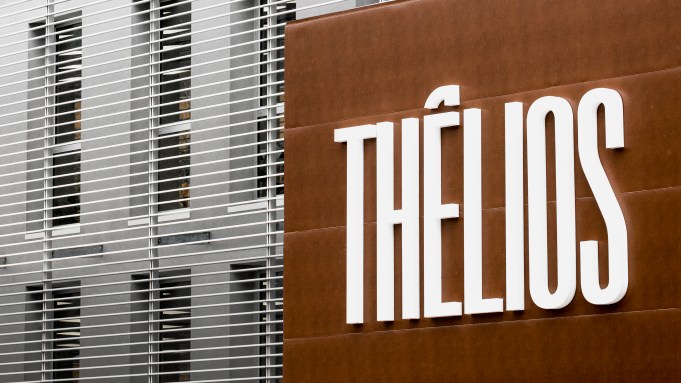 LONGARONE, Italy — LVMH has “the ambition to do formidable things.” And to do so in a very strategic category such as eyewear, the group is banking on Thélios, the joint venture inked last year with Marcolin, according to Toni Belloni, group managing director of LVMH Moët Hennessy Louis Vuitton.

On Tuesday, Belloni and Giovanni Zoppas, chairman and chief executive officer of Thélios, unveiled the state-of-the art production plant here, a one-hour drive from Venice, and known as Italy’s storied eyewear hub. Manifattura Thélios is already producing eyewear collections for Céline, previously licensed to rival manufacturer Safilo; Loewe, which will debut in the second half of the year, and Fred, to bow by the end of the year.

Belloni identified Marcolin as “a consolidated and winning, experienced partner, and the ambition is to build a system of innovation and excellence, craftsmanship and technology and to reach global excellence, although we are aware we are only taking the first steps now.”

Asked about the choice to opt for a joint venture vis-à-vis internalizing production, as did Kering with the creation of Kering Eyewear in 2014, the executive said, “We thought it was best to lean not only on the district of excellence but on a company with a long experience to compete efficaciously. The fact that [Marcolin] will continue to be on the market is a guarantee that the ecosystem will always be open to innovation. Thélios will have to deserve the brands that could potentially be added [to the portfolio].”

Confessing he somewhat “envied pure players” focused on one category, Belloni remarked on how different categories work at different speeds in “this moment of big changes.” Thélios will allow to share knowledge, leverage synergies and “offer a wealth of opportunities such as technology that is derived from other processes in other categories of the group.”

Zoppas echoed Belloni’s forward-looking vision, “working on understanding what the market wants. Our ambition is to have a unique role in the eyewear market.”

“Italy is the second country for our group and with France we share a patrimony of art and culture, and six Italian brands that are expressions of this culture are part of our group: Acqua di Parma; Cova; Bulgari; Fendi; Loro Piana; Pucci and, partly, Berluti,” said Belloni. “It’s an incredible patrimony and beyond the brands and the products, it’s about that inimitable Italian hand. Product is the fundamental pillar of our group. We have 23 production sites in Italy, up from five only five years ago, and we have invested 600 million euros in the past five years to strengthen production in Italy.”

Belloni mentioned the new Bulgari facility in Valenza, the Louis Vuitton footwear factory in Fiesso d’Artico and the plant in Berluti in Ferrara, which opened three years ago and “is already almost not enough [to sustain production].” LVMH is building a leather goods atelier in Tuscany’s Chianti for Céline, said Belloni, and one in Florence for Fendi. “Thélios becomes part of this stream of innovation and excellence,” he observed.

Overlooking the stunning Dolomites mountains, Thélios Manifattura was designed by Design Group Architetti Associati architects. The facade stands out, with its rust-colored panels in Cor-ten steel and large glass windows. The building is also considered durable and environmentally responsible, featuring over 2,300 solar panels installed on the roof. The site generates 10 percent of its annual energy needs, features LED lights and all its industrial waste is processed and not thrown back into the environment. The company employs 250 people, of which 100 are in the plant, and the majority are below age 30.

The factory was set up in record time in less than a year on land that covers 248,400 square feet. The plant spans over 86,400 square feet, of which 25,920 square feet are for offices and the rest is production. Thélios has reduced timing of production to 16 weeks from 20 weeks. Belloni did not provide details about the investment and noted there is a potential to expand by another 108,000 square feet.  The company has reduced lead time in production by 30 percent, and it takes from six to nine months to go from design to market. “We blend know-how with technology,” noted Zoppas.

LVMH controls 51 percent of the joint venture, with the rest held by Marcolin, which, separately from Thélios, produces and distributes eyewear for Tom Ford, Ermenegildo Zegna, Tod’s and Diesel, among other brands. The French group has taken a 10 percent stake in Marcolin. Belloni said there were no plans to change LVMH’s shareholding.

Jean Baptiste Voisin, chief strategy officer of LVMH, said “there are not that many licenses that are as important as those of eyewear, which is a complicated category. LVMH did not want to risk doing [poorly in the category]. This is a long-term project and we believe we can work together well, but we don’t want to go too fast.”

Belloni said LVMH will allow each brand to choose its strategies and “will not force them but will encourage a dialogue with Thélios, which will be the preferred partner. But we must deserve the confidence. Let’s say that if [Thélios will total] only three brands, we would be very disappointed.”

Regarding Louis Vuitton, Belloni said the brand does not work with licenses, “so Thélios will propose a specific model for Vuitton.”

“This is one of the oldest sectors and our ambition is to bring through Thélios a different way to propose content, product and merchandising,” said Zoppas. Distribution is what makes the difference, he contended, and can even damage a brand.

Asked whether Thélios was considering its own stores, Belloni conceded retail is one of LVMH’s “obsessions.” Taking things one step at a time, “if there is a form of integration to optimize our presence, with attention to travel retail, we would consider it, but the distribution strategy is brand by brand and must be absolutely integrated with the label. The goal is not the same for each brand, Céline is different from Fred in the number and quality of doors.” Execution must be tailor-made on each label, he observed.

Zoppas touted the advantages of having all steps of design, production and industrialization under the same roof, with employees working together and “understanding a problem before it presents itself. What is wrong is irreversible in eyewear. LVMH is leaning on someone who knows the industry and the system, someone who has already learned from its mistakes,” he said, sharing a laugh with Belloni.

Belloni addressed the issues related to the gray market, noting that he expected Thélios to focus on this as an “area of intervention” and careful control of distribution.

Speaking about potential business opportunities, Zoppas views omnichannel, also in the sense of digital communication, as a strong vehicle for growth in all markets. Belloni agreed, saying customers are informed and interact. “We must be there to be as accessible as much as possible and provide good service. Eyewear is easily shared, and has a strong potential in communication,” he said. A Thélios web site is “not an immediate plan,” he said.

Zoppas, underscoring the respect for the cultural heritage of the region, said Thélios brings “new initiatives to the district. This is not about stealing employees from other companies, but about training new people — we are investing in young people.”

Thélios is the synthesis of the names of the Greek gods Theia, of light and sight, and Helios, god of the sun.

Marcolin was founded by Giovanni Marcolin Coffen in 1961 in Longarone. PAI Partners took control of the company in 2012.