The Karl Lagerfeld's eyewear licensee since 2007 is repositioning and relaunching the brand, starting with the spring 2020 collection.

A unisex aviator part of the Karl Lagerfeld eyewear's "Icons of an Icon" range, manufactured by Marchon.

A year after Karl Lagerfeld’s death, the namesake brand is powering ahead, brimming with energy and projects and so, too, are the label’s partners, including Marchon Eyewear Inc., the eyewear specialist that has been its licensee since 2007.

In 2017 the two parties renewed their licensing agreement, which now stretches until 2023. But this year marks a new course for the Lagerfeld eyewear line, which is undergoing a repositioning both in terms of price point and design, tapping into the masstige segment, in line with the rest of the label’s products.

“Karl was always very enthusiastic about what masstige could mean for brands, kind of combining the styling and the taste of a prestige brand with a much broader reach and we felt that it was the right time for the label to also embrace this positioning,” Thomas Burkhardt, Marchon’s senior vice president of global licensing, marketing and design, told WWD.

The price range will be lowered and narrowed starting from the spring 2020 collection, which was to be unveiled at Mido later this month until the Milan-based international eyewear trade show decided last week to postpone its dates to July 5 to 7 due to the coronavirus outbreak.

“Consumers’ preferences towards eyewear are changing and that is actually the price segment that is striking right now,” said Burkhardt. “They are much more price-conscious, looking for an entry price offering while at the same time still demanding high quality. They’re trend-driven and [looking for] very aspirational designs, so this high-low is clearly affecting the eyewear industry and it has quite a meaning for what we’ve done with the Karl Lagerfeld brand,” he said.

According to the most recent OMO Optical Monitor study compiled by the GFK consultancy in 2019, “young fashion hunters,” such as trend-driven, hyperconnected customers inspired by social media trends, make up 25 percent of the global spending for sunglasses and Burkhardt said the new positioning will target those consumers in particular, “while at the same time preserving the quality, that really the brand should stand for.” He added the new strategy and collections previewed with key retail accounts globally have already gained their support.

Without revealing the number of retail accounts, Burkhardt underscored that in terms of distribution the new pricing will allow the company to expand the eyewear collection’s international reach The majority of distribution is currently concentrated throughout Europe, with Germany representing the largest market, followed by France, Spain, the U.K. and also Russia. “We see the repositioning and the way we’re expressing the brand a further opportunity for the brand also outside of Europe, in the U.S. and in several parts of Asia that are going to be a focus for us, but even in Western Europe there’s still room for expansion,” he said.

The executive said he counts on the resilience of the Asian region to bounce back from the current situation and that he sees potential in addressing female customers in China, Japan and South Korea.

The spring 2020 collection includes a seasonal lineup in sync with the Lagerfeld brand’s ready-to-wear collection, which was inspired by the Bauhaus aesthetic, translated into architectural and geometric shapes peppered with touches of color, as in a pair of round metal frames featuring a third triangular lens in place of the bridge, contrasted by midnight blue lenses. 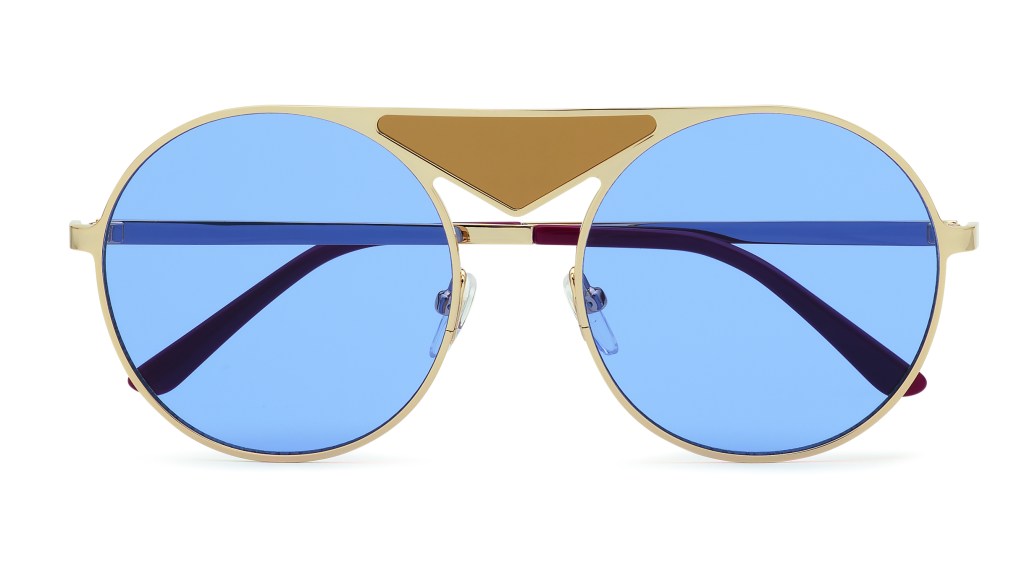 A frame from the Karl Lagerfeld spring 2020 collection inspired by the Bauhaus movement, manufactured by Marchon.  Courtesy Photo.

Additionally, Marchon is debuting for spring a second lineup that it plans to slowly expand in the future. Called Icons of an Icon, it draws inspiration from Lagerfeld’s personal collection of sunglasses. “I mean, who else? He was wearing sunglasses day and night, they were part of his personal trademark, there’s such a richness of materials and styles that we can work with,” said Burkhardt. “We’re going to be very careful with this initially and we’re only launching two styles. It’s a very small, very curated [range].” The lineup includes a unisex aviator design and a cat-eye style, nodding to the late designer’s beloved cat Choupette.

Overall the Lagerfeld eyewear offering is composed of 70 percent women’s styles and 30 percent genderless designs. “We feel strongly that reframing part of the collection into genderless styles that appeal to both men and women will really get an increased audience for the brand, so that’s something we’ve been testing for quite some time and we feel very positive about,” Burkhardt remarked.

The executive described the partnership with the brand’s headquarters as very holistic and synergistic, hinting at the eyewear specialist’s involvement in upcoming collaborations that the Lagerfeld brand might be cooking up. “I have to say that the collaboration with them is probably closer than ever. Pier Paolo [Righi, chief executive officer of Karl Lagerfeld] is doing a fantastic job in guiding the brand ahead. I think the brand is stronger than it has ever been in many years,” Burkhardt noted.

“We’re tightly collaborating with his team that continues his legacy and…we feel that the repositioning, the relaunch of the brand would have very much taken his approval, so we feel more energized than ever about the brand,” he added.

“There’s a real integration with what the fashion side of the brand is doing. We’ve been a partner for well over a decade, we see this collaboration going on certainly for much additional time and we fundamentally believe that we’re offering a very trend-driven collection that has great quality for very affordable prices, which is what the market wants right now and will probably continue to ask for the next two years,” Burkhardt contended.

In the wake of the coronavirus outbreak globally and especially in Italy — the third most affected country after China and South Korea — Burkhardt said Marchon fully supported the decision of Mido to postpone the eyewear trade fair. The company is planning to host clients’ presentations and meetings on a daily basis throughout its 23 subsidiaries worldwide until July. “I think as an industry we will all come together and make sure it has the minimum impact on our business,” he noted.

Asked about the risks in setting up a new strategy in the current context dominated by macroeconomic turmoil, the executive reiterated Marchon stands by its decision as it considers this new strategy for Lagerfeld eyewear as “one of our highlights of the 2020 offering, very much regardless of what’s on the horizon.”

As much as the namesake company, the eyewear specialist as a partner continues to be inspired by Lagerfeld. “He has left so many inputs and so many expressions throughout his career and particularly working on his own namesake label that we feel there’s enough material that we can work with almost for decades to come,” Burkhardt concluded.