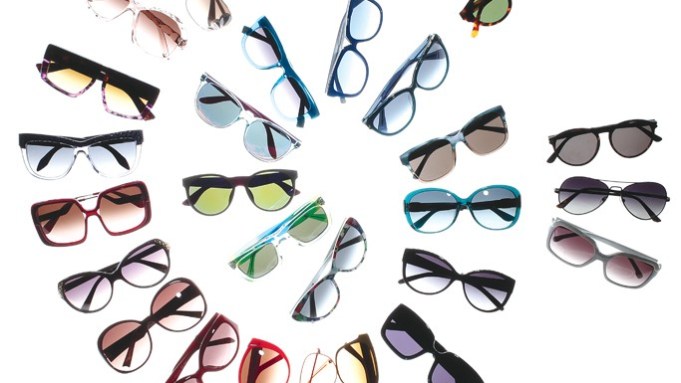 Eyewear is slimming down, lightening up — and getting a dose of high-tech.

Pastels, blush tones and translucents are replacing bolder fluorescents and richer colors for spring, according to eyewear firms exhibiting at International Vision Expo East at the Javits Center in New York from March 14 to 17.

Oversize silhouettes are shedding some of their prior heft, as frames become thinner and shapes — ranging from round to cat-eye — are shrinking somewhat in size. With their new look, fashion sunglasses are also adding more technical elements, such as polarization on colored lenses.

RELATED STORY: Jewelry Trend: Get Your Digital On >>

“Chunky styles with heavy colors made a very bold statement on your face [in the past],” said Marchon Eyewear Inc. president and chief executive officer Claudio Gottardi. “I think that bold statement is over. I think we’re in a period of softness.”

According to Gottardi, frame shapes are still oversize, but colors are lighter and they counterbalance size. This is the beginning of a trend back toward smaller eyewear. Small shapes and lighter materials were popular 10 years ago, he said. Since then, eyewear has been all about oversize, statement looks. Now, the industry is starting to retrench back to smaller sizes.

Those color and size trends can be seen in Marchon’s new collections, which include Chloé, Valentino and Salvatore Ferragamo. Marchon acquired the Chloé license last year from L’Amy Group and is introducing its new collection at Vision Expo. Retailing for between $275 and $385, the line encapsulates the softer color trends Gottardi highlighted.

Although Marchon’s fashion portfolio takes cues from Chloé, the ceo noted that Michael Kors, one of the company’s most successful mass brands, also reflects the softer color trends.

“Kors is an exploding business in terms of revenues,” Gottardi said. “We have developed a European collection within Kors. The frames use only light colors, crystals, baby blues, vintage styles you’d see in the Fifties.”

Gottardi introduced those “successful” looks in Europe last year, and now is cycling the collection into the U.S. market.

Marchon, which acquired Skaga and Dragon last year, is also focusing on new lines from Valentino and Salvatore Ferragamo, both of which interpret designs from the fashion houses. In particular, in Valentino’s new men’s optical and sun collections, Marchon brings in design elements such as the “V” on the frame’s hinge. According to Gottardi, this type of branding is preferable to logos for men. Valentino also makes use of studs along the frames for men’s and women’s looks, to create a “structural,” textured feel.

At Safilo Group, the focus is less on any particular color trend, and more on nodding to a house’s heritage. The firm, which makes eyewear for Gucci, Dior, Saint Laurent and other houses, as well as its Carrera and Polaroid Eyewear brands, said it put more emphasis on design details for spring.

Vedovotto pointed to Dior Homme’s Blacktie 2.0 sunglasses, a classic square style that infuses acetate and metal in an ultraflat, lightweight black frame. The executive also referred to Saint Laurent’s relaunch, noting that since the house has been renamed, Safilo retooled the styling of the collection to match the minimalist branding.

This work is reflected in two classic models, a men’s pilot-shaped number in metal and a unisex vintage-inspired acetate square frame. The pilot frame includes a “Saint Laurent” logo engraving on the arms of the glasses, while the vintage frame includes a new metal corner on the temples.

Carrera also showcases styling that nods to its sporty heritage, from the wavy design on the glasses’ arms to a round tortoiseshell frame inspired by the brand’s heritage styles.

Polaroid, which is Safilo’s latest acquisition and biggest priority at the moment, ushers in a new era for the firm. Polaroid melds its heritage with technology, which Vedovotto said is an overarching trend in the eyewear industry. And by technology, the ceo means polarization. Safilo has added “ultrafine polarized lenses” to its Polaroid collections.

Bringing polarization to many of its classic and fashion offerings is central to Safilo.

“I think with the attention on quality sunglasses, polarization is a real trend,” Vedovotto offered. “Today’s savvy customer is increasingly trying to merge the function of polarization with the fashion trend.”

Fabrizio Gamberini, ceo of Marcolin USA, concurred on polarization in fashion sunglasses, noting that demand is “moving much faster than we thought.”

To meet that demand, Marcolin is adding polarized lenses to most of its brands, including Tom Ford, Montblanc and Timberland Co. Asian-fit frames will also be introduced in many of the collections, as there’s a burgeoning demand by Asian consumers for a broad range of fashion sunglasses.

In addition, Gamberini, who said bold colors, not simply blush, would be big for summer, echoed the importance of “storytelling” within brands as a powerful driver for business. Case in point: Marcolin will introduce Diesel sunglasses that will incorporate bits of the brand’s denim in its frame. Gamberini also pointed to playing up Roberto Cavalli’s heritage of animal prints and serpents in eyewear this year, as the Chinese celebrate the Year of the Snake. Marcolin, which hasn’t exhibited at Vision Expo East since the start of the economic downturn of 2008, hopes this link back to brand heritage will fuel stronger growth, so it can continue to expand its portfolio in the near future, the ceo said.

Carolina Herrera is launching a new collection with De Rigo Vision SpA, to which it has been licensed since 2011. The fashion brand is also banking on its heritage to fuel sales. According to the house, its spring collection will nod to the “effortless luxury and sophistication” reflected in its clothing. The eyewear will bring in a new “signature element” in the form of contrasting, accented detail on frames that combine metal with a blend of organic acetates. The natural-colored, textured frames will be “amplified” by exaggerated lenses.

The John Lennon Collection, a new exhibitor at Vision Expo, aims to attract attention with eyewear that’s an interesting amalgam of fashion and technology. The Adlens-owned brand is launching its niche line at the trade show. The collection recalls John Lennon’s look, namely in small, round eyeglasses, incorporating fluid-injected lenses that allow for instant vision correction.

By turning a removable knob at the frame’s temple, the glasses can be adjusted to conform to a variety of prescriptions. Retailing up to $150, the collection is available in sun or optical, and is currently stocked at vision centers in seven cities. Distribution will expand “significantly” this spring and the line will be available on adlens.com by April, said Christine Fraser, a spokeswoman for the brand, who noted that for every pair of Lennons made or sold, the company donates a pair to Vision for a Nation, a nonprofit based in Rwanda.

Viva International Group, which manufactures eyewear for the likes of Guess, Harley-Davidson, William Rast and Gant, is banking on mixed materials and a combination of boldly colored frames and softer, translucent styles.

According to Jennifer Orentas, vice president of merchandising, while color is important for the season, it isn’t necessarily what will sell product — authenticity and quality will. While she agreed that silhouettes were slimming down and logos were being diminished, what customers want is a product that feels unique. For its part, Viva has created capsule collections for five of its 12 brands that will make use of higher-priced materials like leather, metal and textured acetate. The collections mainly target male consumers and cost roughly $15 more. Viva’s brands are more moderately priced, in general, with its most expensive brand, Guess by Marciano, topping out at $160.

“At the end of the day, I think having success goes back to making sure customers feel they are getting value,” Orentas said. “We have to make sure that the brand’s DNA is inherent in the frame.”