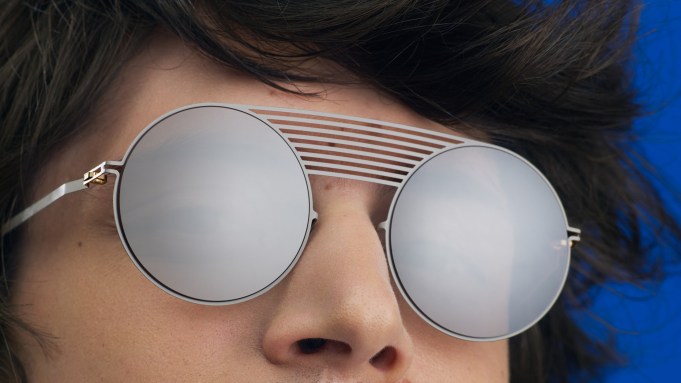 BERLIN — Mykita is multitasking. New frames from the German eyewear innovators were on the Milan runways in January via collaborations with Tim Coppens and Damir Doma, while the next styles for the collections from Bernhard Willhelm and Maison Margiela are in the works. And the Berlin-based brand is poised to launch a new concept, the Studio collection, in stores in mid-February.

An unrestricted creative outlet for Mykita’s design team, the Studio concept was previewed in October at Paris eyewear fair Silmo, and launches with three capsule collections. Each consists of two to three models based on a design theme, in three to four colorways. With their thin modernist lines and round lenses, Studio 1.1 and 1.2 take inspiration from Fritz Lang’s “Metropolis,” while 2.1 and 2.2 are oversized with a mirrored coating covering part of the surface of frame and lens. Frames 3.1 and 3.3 are bold dark acetate frames. Mykita has set the pricing for its Studio range at 359 euros and $599.

“In the past it often happened that we couldn’t really express certain ideas or things because it wouldn’t fit in the parameter of the normal collections, and that’s why Studio was born,” said Mykita creative director Moritz Krueger, noting that there was less pressure to birth a hot commercial success with this project.

During Berlin Fashion Week, a select group of eyewear aficionados was given a peek at Mykita Studio’s fourth iteration, which includes playful color-blocked frames in sherbet colors and is described by Krueger as an exercise in constructing a frame from different modules.

The colorful Studio 4 collection was exhibited in Paris last week, and will be presented this weekend at Munich’s Opti trade fair.

“We think at the moment eyewear design is a lot about more having than being, so let’s say strong mirrors and a very chic aesthetic,” explained Krueger. “And in this collection we wanted to bring in a bit of a funny vibe, as well. Not making people look funny, of course, still look cool, but don’t take yourself too seriously.”

Mykita Studio’s fifth collection is already in the works, Krueger told WWD. It will be an optical collection, the first in the Studio range, and will be presented during Paris Fashion Week, as well as at Mido in Milan in March.

The design team has created five studio collections in seven months, on top of their other collection and collaboration work, in what looks like a sped-up creative burst; it’s helped along by the fact that all manufacturing is done in-house, shrinking lead times.

“We have increased the pace,” noted Krueger. “But I think the main driver is that we were just very enthusiastic about ideas, and wanted to realize them.”

Alongside that is the need to provide variety for the brand’s growing mono-label retail presence, now up to 14 stores, including three in the U.S.