These accessories designers are making a splash outside their own countries. 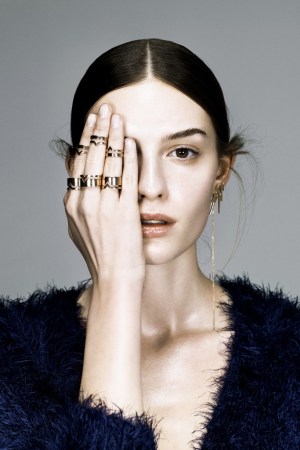 Scandinavian accessories designers are making a splash outside their own countries. Here are a few.

Backstory: Designed to be layered and paired, Maria Black’s mini-rings, necklaces and ear cuffs aim to deliver edgy sophistication. Her interchangeable minimalist metal pieces now include polished rose gold and diamonds, and play in the boundary space between costume and fine jewelry.

Black’s newest collection, Occasional Dream, takes inspiration and model names from the divergent phases of David Bowie’s style, with a futurist accent. Retail prices start at around $55 for oxidized silver stud earrings, and go up to $1,700 for an 18-karat cascading gold and diamond ring.

Collaborations with designer Ann-Sofie Back, musicians Hercules & Love Affair, jewelry designer Ligia Dias and a track list’s worth of DJs put the accent on quirky glamour.

Frames are crafted in Italy, and leather cases are made in Mallorca, where the couple lived for several years. Hyde’s sunglasses range in price from around $326 to $479 at retail.  New this season — optical frames; many are made with buffalo horn and have clip-on sunglasses.

Home Base: Native of northern Norway, now based in New York.

Backstory: Bjørg Nordli-Mathisen’s dark, often humorous pieces touch on themes from Darwin to Dada. The nomadic designer, who is from northern Norway but has also lived in India, releases two collections a year, one in silver and precious stones, the other in bronze; all materials are environmentally sourced.

Her off-kilter neckpieces, earrings, decorative crystal glasses and metal clutches have made her a favorite for photo shoots and have attracted stars from Rihanna to Madonna.

Simple rings start at about $83 retail, a silver-plated bronze-and-leather neckpiece is about $500 and her rose gold-plated eyeball bag is $1,390.

Backstory: Textile designer Signe Emdal considers herself a colorist. Her multishaded limited-edition digitally knit scarves, shawls and hoods are sometimes made in conjunction with installation art; she’s done projects and products for the National Gallery of Denmark, Henrik Vibskov and Dansk.

The designer works with analog images, translating them into digital patterns that are woven with a vintage 1984 industrial knitting machine.

Next up, Emdal is collaborating with Berlin fashion label Reality Studio on its fall collection.

Designers: A team including Björn Weckström and Mari Isopahkala.

The company was founded in 1960; designer Björn Weckström joined in 1963, and is still contributing — his looks have been worn by Yoko Ono, and even appeared on Princess Leia in “Star Wars.”

The latest addition to the design team of sculptors and artists is Mari Isopahkala, who previously worked with glass and furniture.

Lapponia pieces come primarily in silver, but also in bronze, acrylic, and recycled gold and white gold. They’re sold in independent jewelry shops and chains across Europe, and to a more limited extent in the U.S., Australia and Japan.  Sterling silver earrings retail for a starting price of about $200, bracelets at around $800 and necklaces start at about $460.