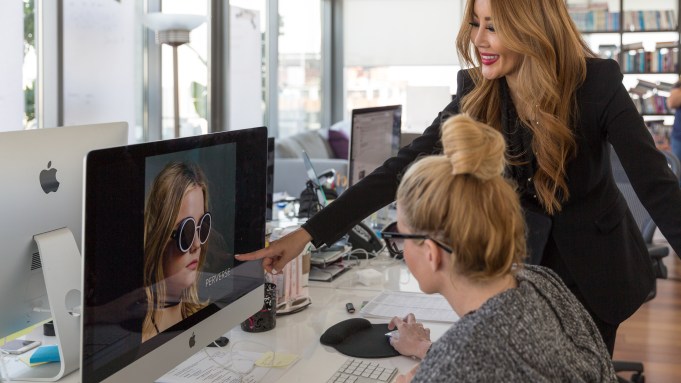 NYX Cosmetics founder Toni Ko is hoping that her talent for creating colorful, accessible and must-have items for women will translate into the fashion sunglass business. Today, Ko will launch Perverse Sunglasses as an e-commerce platform, to be followed by 125 retail stores over the next five years.

Beauty followers know that Ko, who founded NYX in Los Angeles in 1999, has a knack for social media and retail, having propelled that brand to $120 million in annual wholesale revenue and 2 million Instagram followers by the time L’Oréal snapped it up in June 2014 for an estimated $500 million.

With a beauty noncompete in place until 2019, Ko found that early retirement wasn’t for her, and wanted to step back into the retail marketplace.

“I sold NYX to L’Oréal because I thought I was ready to retire, but by the second day, I was bored out of my brain,” said Ko. “I needed to have another project.”

With a skill set firmly grounded in value proposition brands (NYX was known as the mass-market MAC), Ko hit upon the fashion eyewear category while shopping on Fifth Avenue.

“I passed an optical store that reminded me of Sephora, full of high-priced multibrand items, and thought, ‘Why isn’t there a store that’s like a MAC store, but for sunglasses? With an American brand at a great price point?’” she said.

With Ray-Ban sunglasses at $150 retail and Warby Parker optical glasses at $90 to $180, Ko saw an opportunity.

“There is a gray area between where you find cheaper sunglasses at $5, $10 and $15, or fashion brands that have sunglasses as a second thought, or the non-branded customer experience. Something clicked at that moment. This business is exactly the spirit of NYX Cosmetics.”

At $30 to $60 retail, Perverse Sunglasses is meant to be fashion forward and affordable, like NYX, and with a robust number of Made in China stockeeping units — 125 styles with a total of 450 colorways at launch with a new style every week. Ko is catering to the “perennial 25-year-old” not a teeny bopper who can’t buy multiple styles at $30 a pop.

“The eyewear industry has been so dominated by three or four companies that own the entire landscape; that’s why they are so expensive. But everybody on our team believes consumers don’t have to pay $300 for great sunglasses.”

The Perverse team also borrows from the definition of the word, meaning to go against the norm. Its executives come from Sanrio, Sephora, Forever 21 and Charlotte Russe, not eyewear companies.

And true to her marketing savvy, Ko has inked a deal to be the official eyewear sponsor of the upcoming Coachella Valley Music and Arts Festival, beginning April 15. Joining brands like American Express and H&M on a global stage is a coup, and part of her e-commerce launch will involve contests to win VIP tickets to the festival.

That will dovetail into her retail plan to roll out brick-and-mortar stores at the end of May. There are five leases already signed in Los Angeles, including the downtown L.A. flagship on the ground floor of the company’s headquarters; Westfield malls in Topanga and Culver City; a free-standing location in Larchmont Village and one on Hollywood Boulevard. New York, Miami and Chicago are also target cities in her aggressive retail plan for 125 stores in the next five years.

The store concept is simple — a bright, shiny jewel box that lets the colorful merchandise shine, where customers are encouraged to try on styles from open shelves.

The e-commerce platform is more dark and moody, and powered by Shopify. Each pair will be shown on a 180-degree model, but Ko eschewed splurging on virtual reality or face personalization technology. Returns will be accepted with no questions asked for a full refund, but they won’t be free. “It’s a for-profit business,” she notes.

With the e-commerce and physical stores aiming to complement one another, Ko estimates first-year retail sales of $15 million. If the venture takes off, would she ever go back to beauty?  “Of course,” she said.  “I’m counting the days.”