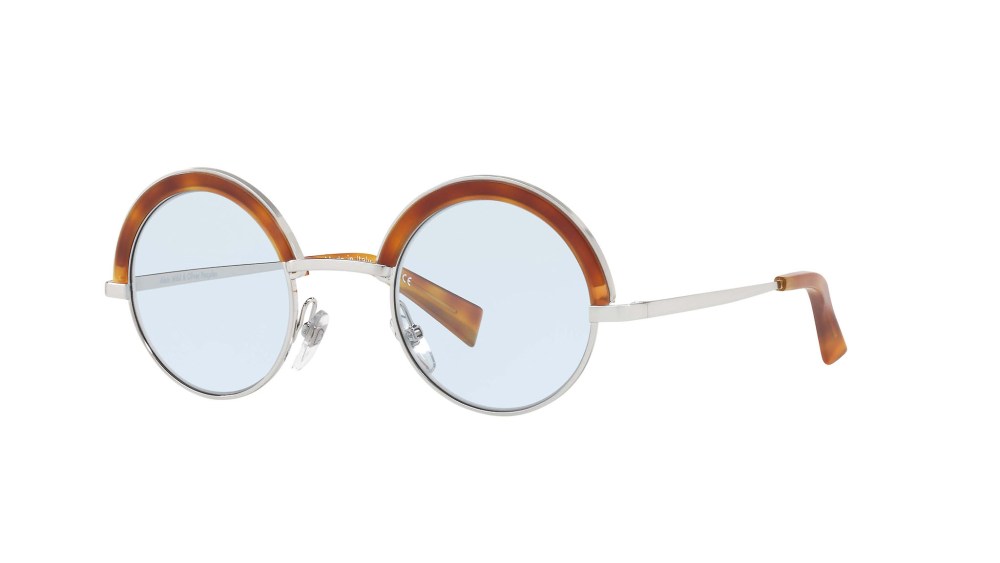 Oliver Peoples and Alain Mikli may be jointly operated, but visually one would never know it. Now, taking advantage of the brands’ differences, the Oliver Peoples Group has merged their aesthetics into a first-time product collaboration.

“Being the creative director for both brands, it came natural to put them together; I know it’s not common for brands in the same category to collaborate,” said creative director Giampiero Tagliaferri, who joined the firm in 2016 from a product management role at Oliver Peoples Group’s owner Luxottica.

“Both are very high-end brands sitting on opposite sides of the [aesthetic] spectrum,” he said.

Tagliaferri found a vintage palm print Mikli acetate pattern in the company’s Paris archives — originally designed in 1987, the year of Oliver Peoples’ founding. The print provided a jumping-off point for the collection.

“At the same time, we decided to put some classic Oliver Peoples’ treatments and metals on Alain Mikli shapes, which are usually very colorful.”

Its designs evoke the changing face of eyewear, which is experiencing a design renaissance in the wake of consumer fatigue. Brands report that Wayfarer-style sunglasses had dominated the market for too long, forcing eyewear companies to quickly innovate to recapture consumer attention.

“In the past year, there’s been an evolution in eyewear,” said Tagliaferri. “In fashion, we know, trends are changing, everything is moving into the late-Eighties styles — those shapes are the ones up-and-coming,” he said, pointing to the success of rounded shapes.

Oliver Peoples, based in Los Angeles, has found itself in the midst of the city’s creative rebirth. “Los Angles is in a moment right now,” Tagliaferri said. “I moved to L.A. a little bit over a year ago and, like many people, came here from Europe and New York to work in the creative world. It’s definitely the moment for a rediscovering of L.A., you can see it when you meet with people,” he said.

The company is now focused on building its brick-and-mortar operation. Oliver Peoples just opened a Boston location within the city’s Prudential Center mall. This year it also plans to amp up its North American presence with a Miami opening in late 2017. Madrid is also on the agenda for this year.

“It’s the best way to represent the brand 360 degrees. In the optical world, there are not many brands dedicating resources to monobrand stores. It’s a different approach,” said Tagliaferri, who added that the label would like to double its worldwide fleet of about 30 stores within the next few years.