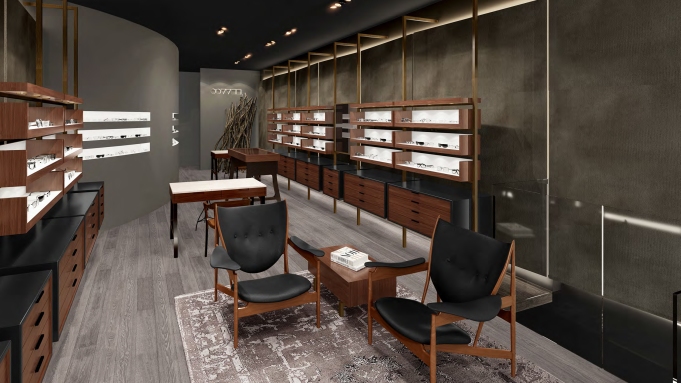 The Los Angeles-based eyewear brand joins stores including Delpozo, Red Valentino and Boutique 1 on the part of the street nearest to Sloane Square, which has just been redeveloped. Located at 151 Sloane Street the new store will sit near Chloé, Cartier, Tiffany & Co. and Hackett.

The small space, which spans about 650 square feet, will stock optical lenses and sunglasses, and have opticians and an eye doctor on site.

David Schulte, the firm’s chief executive officer, said London has always been an important market for the brand, which has been selling in the U.K. via a network of wholesale clients for 30 years. He said the new store was a long time coming: It was just a question of finding the right-size store and neighborhood.

“We would have loved to have been here five years ago. I think the real estate in London is one of the toughest cities right now in the world,” he said, adding that the store interiors reflect his vision of the city.

“We wanted to take advantage of the history of London. I had been going for years, and am obviously a huge fan of the club culture that exists in the city, whether it’s Annabel’s or Loulou’s or all that cool stuff that’s going on over there,” said Schulte in a telephone interview. “So we tried to play off a little bit of a darker tone than we normally would. There is gray suede on the walls and oak floors and we’ve wrapped the cabinets in leather. It’s very beautiful and rich. I can’t stand when I’m flying all over the world and I go to different stores and it’s always the same thing. So we really try hard to give people a sort of city-centric experience,” he said.

While Schulte declined to give first-year sales projections, he said it would be an “A-plus store. It needs to be a flagship for us. We took a lot of time to find it, and we think London is an incredible city for commerce.”

Asked whether Britain’s decision to leave the European Union has disrupted the opening plans — or given him pause about investing here — Schulte said it has not.

“We’re small enough not to get too caught up in geo-political things. It’s obviously big news for the city, but it wasn’t something that made us nervous. London is one of the great cities of the world and it will continue to thrive no matter what happens. The London real estate market is very hot right now, whether it’s Sloane Street or Mount Street or parts of the East End. So we’re thrilled to finally be able to put a flag in the ground.”

The brand had already been selling through a network of high-end opticians and at stores such as Dover Street Market, Matchesfashion.com and Browns, although the focus remains on the optical offer.

“We are really trying to position Oliver Peoples as the most exclusive eyewear brand in the world,” Schulte said.

The brand has stand-alone stores in New York, Los Angeles, Malibu, Costa Mesa, San Diego, San Francisco, Chicago and Tokyo. The location of the next European store is anyone’s guess.

“It’s a real estate question,” said Schulte. “We do have an absolute strategic goal to have a store in key cities around the world, and of course in Paris, Milan and Berlin. For us to be positioned as the most exclusive eyewear brand in the world — which is our goal — we need retail, we need that visibility, and we need to give all of our customers an experience at the highest level.”