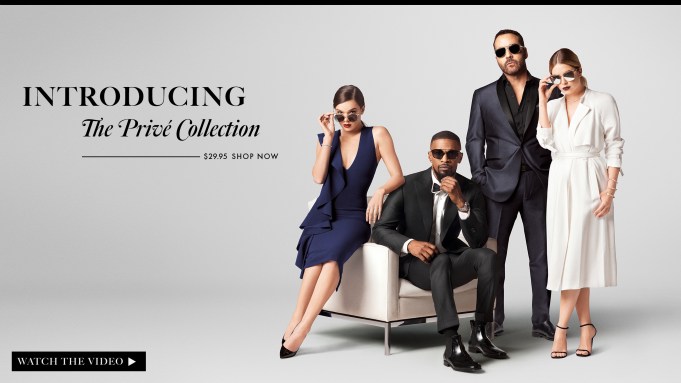 Privé Revaux wants to shake up the eyewear category online with its brand of $29.95 sunglasses — and it’s enlisted Amazon and a handful of celebrities to help.

The well-heeled start-up wants to undercut the “under $100” business model that’s dominated eyewear online since Warby Parker hit the scene in 2010 by offering hundreds of styles that cost less than a third of that price. On May 15,Privé Revaux’s digital flagship at priverevaux.com will begin to pre-sell 115 stockkeeping units, or sku’s, of its $29.95 sunglasses, which have names such as The Warrior, The Escobar or The Godfather. Exclusive launch partner Amazon will launch the brand on its homepage at Amazon.com June 2.

Founder David Schottenstein has tapped a handful of celebrity partners to help spread the word via their respective social media channels and participate in the design and marketing of product. Jamie Foxx, Hailee Steinfeld, Ashley Benson and Jeremy Piven are all partners in the venture, as well as celebrity stylists Rob Zangardi and Mariel Haenn, who have joined Privé as co-creative directors. Schottenstein declined to say how much of a stake each has in the company but confirmed they all have equity.

Schottenstein is not shy about his feelings on the current state of the eyewear sector.

“If you look at the sunglass market and the way it’s set up, it’s probably one of the only items people spend $300 to $500 on that they lose with incredible frequency. It’s almost like a commodity…and the margins are just absurd,” Schottenstein said, adding that he still thinks even $100 is too much for a pair of sunglasses.

He recounted a story Foxx told him about wearing a pair of sunglasses and getting “blown up with compliments” — and Foxx bought them at a Chevron gas station for $12. This — and the fact that the eyewear category online still has not seen enough disruption for Schottenstein’s liking — became the impetus for starting the company.

“I knew that if I searched hard enough I could find a factory that manufactures [quality] eyewear….And I knew that I could charge less than $30. It’s ambitious, but if you know the industry, as far as what the costs are [it’s doable],” Schottenstein said, adding that all Privé’s eyewear is assembled by hand in a factory in China.

The model might sound similar to any number of brands that launch with an e-commerce store, but there’s one key difference: The direct-to-consumer players that came before Privé avoided wholesale partnerships because their entire businesses were predicated on “cutting out the middle man.” For those players, working with a retailer would reduce already lower than industry average margins to nearly nonexistent. Instead of eventually opening freestanding stores — as most of these firms have done — Privé is linking up with the e-tail powerhouse Amazon right off the bat to build scale. Amazon does not have a stake in the venture.

Schottenstein — whose family started DSW and whose cousin Jay is head of American Eagle Outfitters — isn’t worried about the pressure on margins the tie-up will cause. The visibility, brand awareness and sheer number of sales that will take place as a result of selling through Amazon outweigh the hit Privé will take on profits.

“We probably have the smallest margin in the sunglasses business with what we’re charging, but the fact is I don’t care. I don’t need to make a ton of money on each pair. I want to sell a ton of sunglasses,” said Schottenstein, who set up his own investment fund after earlier launching several other Internet ventures, including men’s custom clothiers Astor & Black. “Because the price point is so aggressive, the market size that we’re so accessible to is significantly bigger than a lot of these other companies.”

In other words, what Privé lacks in margin it will make up for in volume.

And Amazon is confident about the formula, too, so much so that the brand will appear on the retailer’s homepage the day of launch.

“They’re choosing a path to reach customers directly through their own site and Amazon — and that’s becoming more of a trend as they disrupt some of the older, traditional business models,” Kyle Walker, category leader for Amazon Exclusives, told WWD on Wednesday. He added that of the hundreds of brands the program has launched over the past two years, Privé is the first one exclusively dedicated to eyewear.

“Their brand has a vision to disrupt the eyeglass space. It’s a quality product at a very modest price point, which is appealing to us. It gives us the ability to bring it to the Amazon customer, who we know will get a great deal,” Walker said. From a dollar perspective, Amazon has “very high hopes” that Privé will be one of the platform’s more successful launches of the year.

Walker was unable to disclose a percentage but maintained that apparel and accessories represent a significant portion of the top brands that Amazon Exclusives has launched since the program was introduced in March 2015. He pointed to Beta Brand, Tower Paddle Boards expanding its collection to include apparel and accessories and Scottevest, a line of tech savvy apparel, as notable launches for Amazon Exclusives, which is comprised almost entirely of direct-to-consumer e-commerce businesses.

Privé Eyewear’s price point puts it directly in competition with another mega-sized retailer: Wal-Mart, which has in the last few months become increasingly aggressive about expanding its own e-commerce, especially in fashion. Amazon could be feeling a little bit of pressure as a result. Most notably, Wal-Mart purchased Amazon competitor Jet for $3.3 billion last year, but March saw the acquisition of ModCloth followed by Moosejaw in February and then the unveiling of internal investment arm Store No. 8. The new fund will focus on building online retail businesses, and although the sale has yet to be finalized, it’s rumored that a $300 million acquisition for direct to consumer menswear brand Bonobos is in the works.

“We also consider brands our customers as well — it’s why we built Amazon Exclusives….The idea was to help emerging brand owners…[and] drive marketing and visibility on Amazon and help them take advantage of seller programs to reach customers worldwide,” Walker said.