A new collection and advertising campaign nods to the brand's storied history.

By Alexandra Steigrad on May 14, 2012
View Slideshow 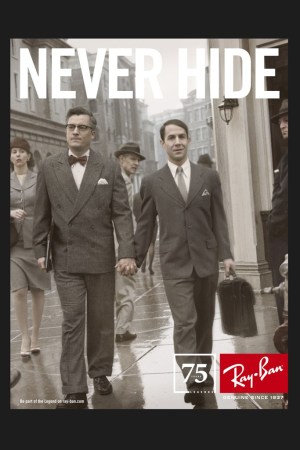 Ray-Ban will quietly fete its 75th birthday this year with a new collection and advertising campaign that nods to its storied history.

The Ambermatic collection is inspired by Ray-Ban’s first aviator sunglasses, which were released in 1937. The capsule collection of four aviators incorporates a light-sensitive photochromic yellow lens that darkens depending on light and temperature conditions.

“People may not realize that Ray-Ban first started out from a military request for pilot’s sunglasses. This Aviator style is something that was developed long ago but that continues to be nurtured by the brand with new frame materials and lens development,” said Sara Beneventi, Ray-Ban brand director. “The relationship between Ray-Ban and the Aviator is treated with reverence. The Ambermatic is a testament to that commitment to craftsmanship and technical design.”

One of Ray-Ban’s older styles, the shooter includes a middle circle under the top bar, which doubled as a cigarette holder designed to free the hands of the wearer when hunting.

Like the shooter, the outdoorsman has top bar and temple end pieces covered in nacre, but it does not include the circle.

Set to hit Sunglass Hut, Henri Bendel and upscale department stores in June, the collection will retail for $219.

Ray-Ban’s new “Legends” ad campaign, which rolls out this month, will not only stage Ambermatic’s arrival, but also be a curtain raiser for the brand’s private book.

The “Legends” campaign tells the 75-year spirit of the brand’s “Never Hide” motto. Shot by Mark Seliger in Los Angeles, the campaign features seven images styled by Arianne Phillips. The photos capture seven historic moments, one per decade, and span from the Thirties to the Nineties. Images, some of them controversial, include a gay couple holding hands in the Fifties, a defiant, Ray-Ban wearing English socialite in the Sixties and white rapper performing in front of an African-American audience in the Nineties.

“Beyond the public’s perception about Ray-Ban, whether they love wearing the Wayfarer or an Aviator, it’s essential to share the brand’s values, its history, really what defines it at its core, during this monumental anniversary,” said Fabio D’Angelantonio, who is the chief marketing officer at Luxottica, Ray-Ban’s parent company. “The pieces around this anniversary, the ad campaign, the Ambermatic, and ‘Untold Stories,’ are created to tell the brand story and serve as reminders of why consumers fell in love with the Ray-Ban in the first place.”