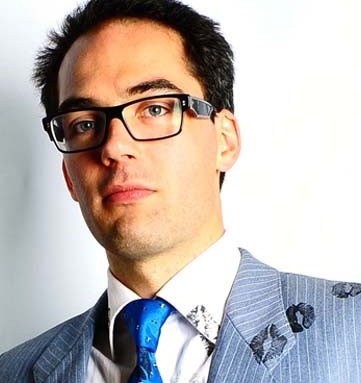 Zachary Tipton resurrects vintage media into in-demand eyewear from his home base in Budapest—and his latest designs are turning heads.

The American-born designer got into glasses as a student and started creating custom rimless titanium frames. He then went looking for a new way to work with plastics, first finding inspiration in his father’s record collection.

Tipton began experimenting with vinyl, moving on to flea market finds. After traveling to his mother’s home country, Hungary, for a fellowship in 2002, he founded a company that allowed him to put his own spin on eyewear. The vintage albums he used came with retro cachet, but the quality and thickness of the vinyl varied depending on where the LPs came from, creating production challenges. So Tipton Eyeworks now presses its own, efficiently getting four frames from a 12-inch record. However, the grooves are far from empty—the company works with unsigned Hungarian and Lithuanian musicians to get the recordings. Buyers can hear the tunes they’re wearing online, or get a vinyl record with their eyeglass purchase, along with special cases molded from 7-inch singles. The black geek-chic frames are lined with laminate color on the flip side.

Tipton broadened his focus to include Cinematique, a line that blends salvaged Italian cellulose acetate, stainless steel and film clips. Each style takes its name from an iconic and departed director, from the solid, sizeable Hitchcock frame to the chic Capra to wayfarer-esque Wilder (with nods to Alfred, Frank and Billy, respectively). The stainless steel temples are open on one side to expose scenes cut from 35-millimeter trailers for new releases and old 16-millimeter films from educational movies to sports coverage.

They’re not just for film buffs or celeb chasers—in fact, the frames never feature recognizable faces. Anonymous arms, legs and cleavage are another matter. “They’ll take Brad Pitt’s body, for example, but without the head,” laughs Tipton. “The bestsellers are basically erotic films and explosions. That’s what people are interested in, you know: sex and violence.” Hits include steamy Spanish film Sex and Lucia (which could fog up your glasses) as well as Armageddon and The Terminator. Clips from auteurs such as Lars von Trier and Woody Allen are also on offer, though Tipton notes: “A lot of times, we’ll see a movie that’s bad as far as directing or plot, but it’ll make great product.” And featuring films with little acting and no wardrobe (stag and soft core) has brought them a lot of attention this past year.

The company deals mostly in wholesale, so retailers make the custom choices, catering to their customer base by programming the film content of the Cinematique temples, be it PG or X-rated, action or romance, black-and-white or color. “If the stores aren’t sure what’s going to be good, we give them a selection. Some explosions, some nudity, the Dolby soundtrack, some nature, and they can later decide,” explains Tipton, noting only two or three out of 100 frames are special requests from end buyers. In New York, the Ford and
Damiano lines hit it big as sunglasses, while in Britain, they are wanted and desired as optical frames. And the squared-off, intellectual Altman is a unisex global fave.

Tipton’s European Union–made products are sold throughout Europe, North America and Asia, but with frame prices running at about 250 euros to 300 euros, or around $360 to $430 at current exchange, they haven’t hit the big time in economically sluggish Hungary. In fact, Tipton Eyeworks’ home market generates only 5 percent of the brand’s sales. So Tipton has a new mission—adding a line of lower-price but still stylish eyewear
for Eastern European shoppers. Adding that to the revamped Vinylize line scheduled for release in January makes it clear this directed eyewear designer has success in his sights.