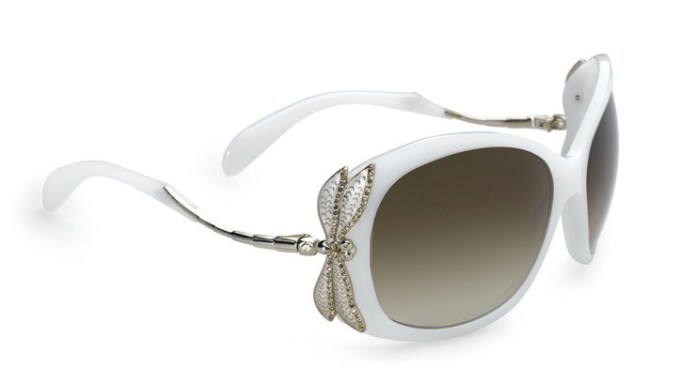 The look: For fall, the designer re-created a magical animal world with a delicate dragonfly glittering with Swarovski diamanté framing the front section of the glasses, with an Art Nouveau touch. The line prides itself on avant-garde technology and functional models, clean lines and shapes and a discreet logo.

Key moments: Giorgio Armani himself modeled in the 2003-04 ad campaign, which emphasized “his personal touch and own passion for eyewear,” said the company at the time; Michelle Pfeiffer was photographed by Mario Testino for the spring 2005 campaign.

Extensions: Emporio Armani launched in 2003 and A|X Armani Exchange in 2006. Emporio targets a younger, more informal customer, and its look is defined by the brand’s eagle motif. A|X has an urban, easy-to-buy, easy-to-wear style.

Emporio Armani key moment: Owls modeling for the 2003-2004 campaign, as a humorous break from the past to mark the brand’s first collection produced by Safilo.